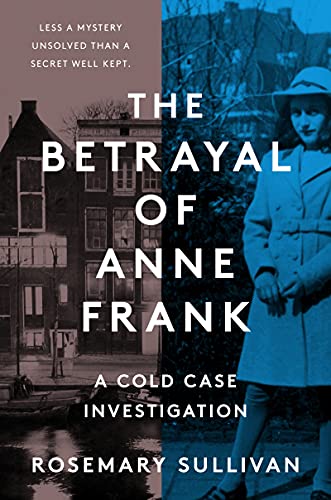 The Betrayal of Anne Frank: A Cold Case Investigation

Sullivan’s work has generated a hysterical reaction that calls attention to the Holocaust’s privileged status in western societies, and which raises uncomfortable questions. Is Anne Frank a sacred cow? Is she really the most talented teenaged writer that ever walked this Earth and went through a genocide? If Anne Frank had not gone through the Holocaust, would she have been so heavily promoted? Does she automatically belong in every classroom? Think of Aurora Mardiganian, who has been called the Armenian Anne Frank. Whoever even heard of her?

The conclusion is inescapable. It’s all about the promotion of the Holocaust, even as it displaces all other genocides.

Consider first this online paper: The Betrayal of Anne Frank: A Refutation, written by some critical Dutch historians, and which is located at:

The Dutch historians write, “Sullivan’s book has led to much confusion and raised numerous questions. The name of Arnold van den Bergh has now gone around the world as the most likely betrayer of the Secret Annex. Given the importance of Anne Frank’s story as the central, iconic narrative of the Holocaust, meaning that Van den Bergh is now positioned as the archetypal traitor, we felt it incumbent upon us as historians to write this report.” (p. 7. Emphasis added).

This is priceless! The Dutch historians admit that the real purpose of their unprecedented and organized objection (and the removal of the book by the publisher) is to protect the iconic status of Anne Frank, and especially to protect the prestige of the Holocaust that Anne Frank’s story undergirds. The fact that Sullivan’s book is a New York Times bestseller makes it all the more dangerous. Now, the standard narrative on Anne Frank would probably not change even if Sullivan’s book is unquestionably true and more widely known, but the Holocaust gatekeepers dare not take the chance.

But wait. It gets even better. The Dutch historians add, “Moreover, we want to emphasize that the debate on the Holocaust and the position of Jews during World War II should be approached with respect for the historical context and with nuance, rather than from an overly complacent modern perspective. For only then can we do justice to the past and also do justice to the people of the past. Including the notary Arnold van den Bergh.” (p. 7. Emphasis added).

So only “the position of Jews during World War II should be approached with respect”, huh? No such specific privilege is afforded to any non-Jewish genocide. In media and academia, the Nazi German genocide of Poles is barely mentioned, let alone specifically respected. I hear no clarion calls to respect the historical context, let alone use nuance, when it comes to Jewish accusations of “Polish complicity in the Holocaust.” And there certainly are no cautions about “doing justice to the past” or “doing justice to the people of the past” when Poles are accused of betraying or killing fugitive Jews, all despite the usual Judeocentric contextual vacuum behind such accusations.

Arnold van den Bergh is long dead, and almost no one has even heard of him in the first place. So why is there so much professed concern and indignation about his reputation? Could it be that widespread knowledge, of even the possibility that the Franks had been betrayed by a fellow Jew, tarnish the iconic image of Anne Frank, and of Jews exclusively as victims? Or must this bestseller book be discredited because otherwise too many people will read about Jewish collaborators, and this may make it a little harder to push the Poles-are-guilty narrative?

Now on to Sullivan’s book. Agree with it or not, but recognize that it is no lightweight. The work involved is extensive. It took five years, and was aided by two hundred people. (p. 303). Numerous listed psychologists, forensic specialists, archivists, historians, attorneys, etc., were consulted for the international project that became this book. (pp. 304-309). There is a list of archives and institutions that were used for this work. (pp. 313-314).

THE DUTCH NAZI PARTY ONCE HAD JEWISH MEMBERS!

The Nationaal-Socialistische Bewegeng (NSB) was founded in 1931. It was not initially anti-Semitic, and had Jewish members until 1938. During most of the Nazi German occupation, the NSB was the only legal Dutch political party. (p. 320).

DUTCH JEWS DURING THE GERMAN-MADE HOLOCAUST

Author Rosemary Sullivan aptly summarizes the situation, “Of the 140,000 Jews living in the Netherlands, 107,000 were deported and only 5,500 returned.” (p. 17). She thus elaborates, “Otto [Frank] could not anticipate it, but by the end of World War II, the Netherlands would have the worst record of Jewish deaths in Western Europe: 73 percent of Jews in the Netherlands died…The estimate of Jews in hiding in the Netherlands varies between twenty-five thousand and twenty-seven thousand. One-third were betrayed due in part to the Nazis’ sophisticated system of financial rewards to tempt police officers and civilians into betraying hidden Jews.” (p. 32).

BETRAYALS OF JEWS: GOYISH AND NOT ONLY JEWISH BETRAYERS FACED CHOICELESS CHOICES

Jewish denouncers of other Jews are reflexively exculpated by the extremity-of-circumstances invocation, while non-Jewish betrayers of Jews are summarily blamed. Sullivan demolishes this double standard as she writes, “It was clear from the files that the IV B4 Dutch detectives depended heavily on civilians to inform them about Jews in hiding. These V-Men and V-Women could be Jew or Gentile. Most had done something to cause them to fear for their lives if they didn’t turn on others.” (p. 150. Emphasis added.) Sullivan then goes into details.

A NOT ENTIRELY ROSY RECEPTION TO ANNE FRANK’S DIARY

Sullivan writes, “Even though it was almost fifteen years since the war had ended, anti-Semitic attacks continued. A German man wrote Otto [Frank] in 1959, “‘I’m shocked that you as a father have published such a thing. But that is typical of the Jew. You’d still seek to fill your pockets with the stinking corpse of your daughter. A blessing to humanity that such creatures were extinguished by Hitler.’…In 1959, he [Otto] and his publishers initiated the first of several lawsuits against those who challenged the authenticity of his daughter’s diary…The slanders against the diary never abated in Otto’s lifetime.” (pp. 93-94). [Otto Frank, Anne’s father, died in 1980].

This book has clearly stuck a raw nerve.  It may force us to rethink the tenets of Holocaust supremacism. How about identifying talented writers, of all backgrounds, that had gone through genocide, and presenting them on an equal footing in the classroom? What a radical idea!