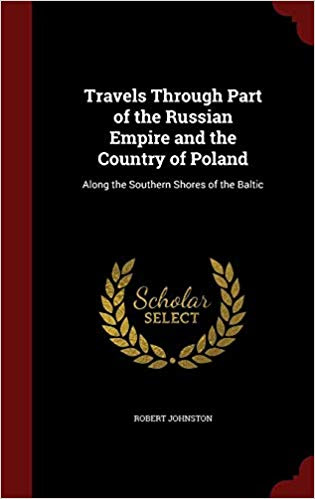 Travels Through Part of the Russian Empire and the Country of Poland, Along the Southern Shores of the Baltic, by Robert Johnston. 1815

My review is based on the 1970 reprint of the original 1815 book. It describes the British author’s visits of Russia and Russian-ruled Poland, which took place less than twenty years after the last Partition of Poland, and only some two years after Napoleon’s defeat. In fact, the author refers to sites of combat, and the local damage caused by the war, a number of times. (pp. 297-on, pp. 337-on). The author met with a small party of Polish officers that had served in Napoleon’s army. (p. 359).

Johnston lamented Poland’s fate, (quote) The fate of Poland must ever excite sympathy. With all the materials of freedom, independence, and glory, she has sunk to nothing;–her name is scarcely known among nations; and those very materials, which once constituted her pride, now constitute her misery. (unquote). (p. 383).

Robert A. Johnston found Poland’s culture and traditions magnificent. He challenged Poles to break the Russian yoke, and expressed confidence that they would. (p. 378, 384).

The author describes Polish nobility as well-dressed (p. 345), and frequently refers admirably to the buildings that belong to the nobles. He depicts the serfs as ones that usually owe their labor to an agent or lessee, and not directly to the proprietor. (p. 389). Nowhere does visitor Robert A. Johnston ever repeat the stereotype of the Polish nobility being particularly harsh to the serfs.

The author provides little detail about Poland’s magnates. However, the Czartoryski family is said to own land that is nearly in size to a fourth of the territory of Scotland. (p. 390).

The standard narrative is quite familiar to the informed reader. Volumes upon volumes of books have been written, in recent decades, mainly by Jewish authors, about Polish anti-Semitism, and they always blame Polish anti-Semitism entirely on the Poles. This standard narrative also blames Christianity (especially the idea of Deicide) for centuries of hostility to Jews, and even for the eventual Holocaust.

The information in this book, which is based on the author’s direct experiences and not on what somebody told him, though not pleasant reading and definitely not politically correct, admits a challenge to the standard narrative. It is for this reason, and only for this reason, that I bring up this distasteful information.

The following material refers geographically to the Kresy, primarily to what is now Belarus. I now let the author speak for himself without comment:

DIRECT QUOTES FROM AUTHOR ROBERT A. JOHNSTON ON HIS EXPERIENCES WITH JEWS. JEWISH BUSINESS PRACTICES

[AT ORCHA]. The greater part of the town has been burnt: its population is about two thousand, and consists mostly of Jews; a more despicable, artificial, mercenary set of wretches cannot be seen; they are without character, without patriotism, and without manners. [p. 331]

[AT KROUPKI]. The houses are entirely of wood, with a population of about three hundred Jews. We were detained the whole day before the Jews would give us horses. They disregarded the Russian order for horses, and nothing could equal their knavery and extortion. In most countries Jews are perfectly alike; but in none perhaps do they excel more, in knavery, than here. Every traveler must bargain for what horses he requires, and is sure of being imposed upon;–there is no appeal, and he must be at the mercy of these imposters. The instant he arrives, he is assured that there are no horses to be procured–shortly after he is asked what price he would give for them, and a price is demanded in proportion to the haste of the traveler to proceed. At night they invariably deny having horses, in order that the traveler might be detained, and pay lodging money, or more likely, be robbed. [p. 334]

[AT MINSK]. The population is about seven thousand, of which about three thousand are Jews. Of the lower classes, the Jews are the most filthy and the most annoying; it is impossible to avoid the pestilential intrusion of these groveling reptiles. The moment a traveler arrives, he becomes haunted by them–he cannot stir without being watched. Every Jew employs a vagabond to ply in the streets and solicit the custom of the stranger; his house is ready on all occasions, for a hotel, or anything else, no matter how base! On entering the town we had great difficulty in finding a hotel to breakfast in, every house being crowded by the military. Jews innumerably flocked around and invited us; one of them begged us to enter his house, with the utmost obsequiousness; but at the door demanded sixteen roubles [rubles] for the use of a room. Fortunately, we found a German, less imposing, and here we were lodged in a common billiard room, and slept on the long benches, amidst all the noise, filth, and vociferation of the gambling Jews and Lithuanians. [p. 343]

[AT MINSK]. We were detained in this place several hours to repair the damages our carriage had received and met with several traits of the Jewish character. For the next stage they demanded as many roubles as what we had agreed to give for the former ones; this is a common piece of imposition with the Jews, a charge was also made for the time the carriage had occupied the stable, and a still more extraordinary demand was made for a few blows which one of our servants had given the Jew at the time he overturned the carriage! The greatest confusion and vociferation prevailed. The Jews had just quitted their morning prayers, and entered the stable in a brody. One half spoke the Hebrew tongue, another the Lithuanian dialect, and German, French, and English, added to the noise. The glimmering rays of the carriage lamp were feebly thrown over this motley group, and never did a scene of such confusion prevail. At length the dispute was settled by money, the only power the Jews would submit to. [p. 348]

[NEAR KORELITZI]. At sunset we left this village, and had not proceeded more than seven wersts, when, on descending a steep hill, we felt one of the carriage wheels giving way, in consequence of the damage it had received the night before, and the rapid manner in which we had driven during the night. Shortly after we had procured a light, and examined the extent of the damage, a band of Lithuanian Jews arrived, and offered their assistance. The wheel was taken off, and the carriage dragged to a solitary house named Pollanna, in a lonely, wild and sequestered vale; here our perplexities were increased, for no sooner had the Jews and their associates got possession of the wheel, than it was stolen;–neither threats nor reward could induce them to restore it. Hitherto we had traveled by night, as well as by day, among hordes of Cossacks, through endless forests and marshes, over hill and dale, and never met with an obstacle which could retard our progress; but such a check given to our speed made us feel the inconvenience of being in the wilds of Lithuania, among Jews, whom we knew both by report and experience would rob us, and who had been accustomed to attack and plunder the wretched French soldiers. [p. 353]

[NEAR KORELITZI]. We now dispatched our servant to Korelitzi, for the assistance of the police, and had, during the night, agreed to all the exorbitant demands of the Jews, who demanded sixty-three roubles for the horses standing in the stable, and ten more for the use of the posts which supported the carriage! When the police officer arrived everyone had disappeared, and the Jew was most submissively content to receive seven roubles, and to permit us to retain the plank which supported the carriage. [p. 355]

[AT NOVOGRODEK]. The scene of our entering Novogrodec, with the carriage supported on a plan, and with only three wheels, was a source of infinite amusement to the inhabitants. As usual we were surrounded by Jews. [p. 356]

JEWISH ECONOMIC AUTONOMY: JEWS NOT PUPPETS OF THE NOBILITY OR GOVERNMENT

According to the standard narrative (or exculpation), Jews were essentially servants of powerful individuals, be they the Polish nobility or Russian government officials. Jews merely transmitted the exploitative policies of these powerful non-Jewish leaders onto the masses, and bore the harsh consequences of being forced to do so.

The foregoing quoted statements challenge this narrative. One can immediately see the freedom that the Jews enjoyed, notably in economic matters. In addition, the intervention of the police official, against the Jews and on behalf of the traveler Johnston, points to the fact that the authorities, far from setting Jews upon non-Jews, acted to constrain Jewish conduct.