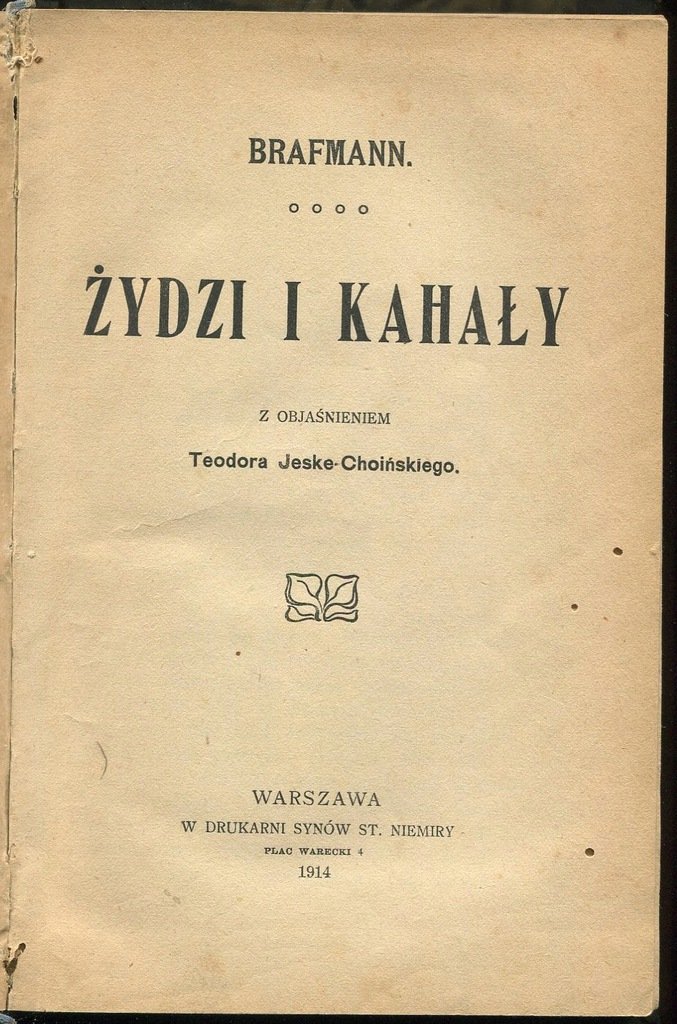 A Russian Jew and a Pole Expose the Massive Corruption of the Kahals (Jewish Self-Government). 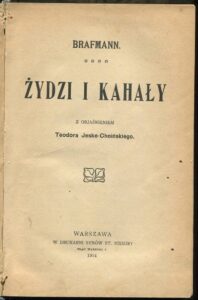 THE JEWS AND THE KAHALS, WITH COMMENTARY is the title of this Polish language book. It is based on an 1870 book by Iakov Brafmann, a Russian Jew who lived in Wilno (p. 29) before converting to Christianity at age 34. (p. 36). When Brafmann first wrote the book, the local Jews engaged in censorship by buying-up all the copies (p. 29). However, a few copies fell into Polish hands, including eventually those of Jeske-Choinski. This book is essentially a sequel to his earlier work.

JEWISH SELF-GOVERNMENT WHILE IN THE DIASPORA
The current spin on this book–an obvious attempt to smear it–is that it is a forerunner to the PROTOCOLS OF THE ELDERS OF ZION. This is palpable nonsense. Discussing some misconduct of kahal (qahal) leaders, and some unsavory attitudes held by many Jews, is very different from accusing top Jewish leaders of hatching a conspiracy to rule the whole world.
The destruction of Jerusalem by the Roman Emperor Titus did not, according to Jeske-Choinski, end the Jewish dream of dominating the gentiles. The Jews set up a sophisticated system of self-government, and it largely originated among the stay-in-place Jews of Babylon centuries after the Babylonian Captivity. (p. 20). For centuries, it grew. In every Polish town, there was a kahal (qahal, self-government) and a Bet Din (Beth Din)(Jewish court). The Bet Din is characterized as despotic and dictatorial. (p. 25, 113). The Synagogue divided Jews into two classes: patricians and plebeians. (p. 79, 173). The Beth Din assigned seating, in synagogues, in accordance with elitism, hierarchy, and status. (p. 150).

BOYCOTTING THE JEWS: STOP BLAMING THE ENDEKS
Nowadays, all we hear are complaints about Roman Dmowski and the later ONR organizing boycotts of Jews. Ironically, Jews had first boycotted Polish commerce, and had done so for centuries! (p. 26). When the Jews came to Poland, they took the commerce away from the Poles. It was the Jews, and not the nobility, that exploited the peasants and the common people. (p. 26). Complaints to the government did little good. If Jews were eventually thrown out the door, they came back through the window. If they were thrown out the window, they snuck back via the chimney.
Jeske-Choinski shakes his head at the fact of the Polish government tolerating, for centuries, the presence of an excellently-organized Jewish nation-within-nation on Polish soil. (p. 28). He calls Poles that advance Jewish interests, for Jewish money, the worst type of SZABESGOJ (Sabbath goy)(pp. 8-9).

MASSIVE JEWISH BRIBERY IN ACTION
There were Jewish calls to “bribe the poric (porets)”, or nobleman (p. 47). Jews also paid off the Polish leaders who were about to make a move to restrict Jewish influence. (p. 26). This took place on a large scale, and even went to the top. According to Jeske-Choinski, the synods ordered the kahals to collect 250,000 zlp. for the purpose of bribing members of the Polish sejm (parliament).(p. 27).
This was no fluke. Bribery was also extensive among Russian Jews. (p. 63).

HOW FAR DID JEWISH AUTHORITY GO?
The Jewish policy of DINA DE’MALKHUTA DINA (the law of the land is law) is often quoted as one in which Jews conformed to the laws of the host gentile nations. It is not so simple. The authors (p. 37) contend that DINA DE’MALKHUTA DINA primarily referred to goyish leaders and did not apply to court decisions involving Jews. (p. 37). In fact, the Talmud does not command Jewish acceptance of non-Jewish courts. (p. 94).
Now consider chazakah (legal presumption of ownership) and meropia (partial blindness, in this case blinding the goyim). According to the authors, the Jewish concept of gentile lands was that of a “free lake” (p. 81, 192), in which everything, in principle, was free for Jews to take. According to Brafmann, the kahal took upon itself the selling, to Jews, of the rights of chazakah and meropia to any and all goyish property. (p. 82, 86, 150). Brafmann (p. 155) condemns this as immoral. Of course, Jews did not (usually) have the power to unilaterally assume ownership of non-Jewish property. So, they did the next best thing: They treated, as much as possible, goyisch property as their own, and used their purchased right of chazakah and meropia, to gentile property, as a license for exploitation. (p. 38).

BOTH JEWS AND GENTILES RESISTED JEWISH ASSIMILATION
The kahals made big money from Jews in general (p. 50), notably from the production and sale of kosher meat (monetary figures provided: p. 65). The Talmud had strict policies that governed the laws of kashrus, and it took a schochet to perform the ritual slaughter. The authors contend that the kahals especially exploited the kosher meat process to not only maintain their power over the Jews (p. 59), but also to fight Jewish assimilation by effectively walling-off the Jews from the gentiles. (p. 62).
Jews in present-day Belarus and Lithuania already owned 73% of the landed estates. (p. 84). Around 1866, a controversy arose in Russian society on the prospective emancipation of the Jews. The concern was that, if Jews were given full civil rights, and allowed to live wherever they wanted, they would use this new freedom to buy-up all sorts of small and large urban properties. (p. 154).

KOL NIDRE (KOL NIDREI)
The Kol Nidre is not really a prayer. It is an evasion of promises, such as marriages, oaths, etc. No wonder that Jewish contracts and promises were seen as untrustworthy. (p. 184).

JUDAIC ANTICHRISTIANITY
The authors elaborate on the Jewish antagonism to Christianity. (pp. 201-on). A Jew was forbidden to come within four steps of a church. When passing by a church, a Jew was to say, “God will destroy the home of the unbelievers”. If encountering the ruins of a church, the Jew was to proclaim, “God takes revenge”. (p. 203). The Jews, speaking among themselves, creatively and derisively renamed things sacred to Christians. Thus, for example, a tfile (church) became tifle (abomination). The Ukrainian city of Bila Tserkva (white church) became Szwarctyme (black filth). (p. 201).