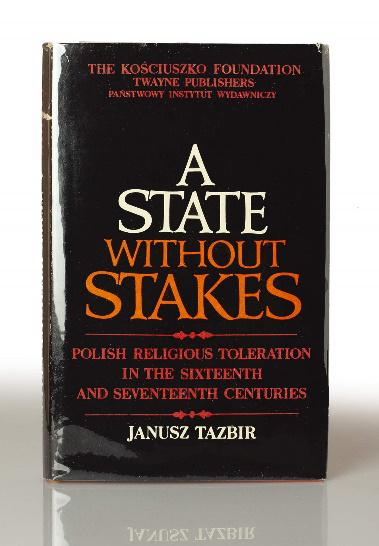 A State Without Stakes: Polish Religious Toleration in the Sixteenth and Seventeenth Centuries

Tolerance is a relative term. Despite the title of his book, author Janusz Tazbir does not say that burnings at the stake, for religious offenses, never happened in Poland. He does say that they were uncommon, and that religious offenses seldom resulted in the death penalty (e. g, p. 30, 47, 117-118).
One of the cases was that of a woman who allegedly sold the Eucharist to a Jew, who desecrated it. (p. 118).

Tazbir should point out that at least some host desecrations done by Jews were factual. See:
https://www.jewsandpolesdatabase.org/2019/11/04/jews-persecuted-christians-horowitz/

THE OLD TESTAMENT SERVED AS A MODEL FOR PERSECUTING RELIGIOUS DISSENTERS

The Inquisition, or less formal persecution of certain minority religions done by both Catholics and Protestants, did not develop in a vacuum. It was explicitly modeled after Judaism, specifically the Tanakh (Old Testament). Tazbir writes, “Invoking these provisions, as well as some examples from the Old Testament, Calvin approved the executions of those radical religious reformers (Anabaptists and Antitrinitarians) who refused to recant their ‘blasphemy’” (p. 20).

With reference to those who advocated the execution of heretics, Tazbir adds that, “…the latter found their authority in the prophets of the Old Testament in such phrases as ‘Take the blasphemer outside the camp and let the people stone him to death.’” [Leviticus 24:14]. (p. 132).

BURNING AT THE STAKE IN PROPER PERSPECTIVE

This odious punishment was hardly remarkable at the time, and certainly not limited to severe religious offenses. Tazbir remarks, “We are understandably shocked nowadays by the barbarity of the punishments meted out to religious opponents. Burning at the stake, beheading the torture of heretics were not more severe than penalties imposed at the time for common offenses.” (pp. 26-27).

At the same time, religious people took the lead in promoting religious tolerance. Thus, the Counter-Reformation in XVI-th century Poland “relied on persuasion and education rather than coercion” (p. 146).

THE STATE, AND NOT ONLY RELIGION, WAS AT TIMES INTOLERANT

Religious dissent does not exist in a vacuum. Tazbir writes, “While most people today side with the ‘rebels’ of that period rather than with their oppressors, they would hardly tolerate a present insurrectionary, anti-social movement, even if it claimed to be carrying out the will of God. Then as now, the bounds of tolerance were circumscribed by public interest and state policy.” (p. 16). He adds that, “The royal edicts stressed that Reformation brings unrest not only in the church, but also in the state, encouraging rebellion, disobedience, and contempt for authority.” (p. 37).

DOES NOT CONFUSE TOLERATION WITH ENDORSEMENT

Nowadays, “tolerance” has become an amorphous buzzword, and toleration of some leftist-defined victim group is falsely equated with a demand to embrace it. Tazbir realizes the difference between the two. Tolerance did not equate with an abrogation of Catholic majoritarianism in Poland: Nor was it “supposed” to. He writes, “Such tolerance did not amount to religious equality; the Catholic Church remained dominant in Poland until the Partitions; and this was solemnly re-affirmed by the Constitution of May 3-rd…” (p. 22).

No group was consistent in seeking minority rights (when a minority) while at the same time granting minority rights to others (when a majority). (p. 146). As an example, Tazbir comments, “John Locke, for example, stated in 1689 that he would have had no objection to granting full civil rights to Catholics, had it not been for the fact that whenever they secured them, they used their position for plotting against Protestant governments.” (p. 26).

Tazbir suggests that the Anabaptists and Antitrinitarians were the most consistent champions of religious tolerance, but that was because they were almost always in the minority. (p. 25). However, this changed in the rare instances when they became the majority, “In 1534, when the Anabaptists took control of the city of Muenster in Westphalia, they drove out all those who refused to accept their faith and confiscated their property.” (p. 25).

In addition, religious minorities were not above doing outrages against the majority, and this could only have untoward consequences. With reference to Poland, Tazbir comments, “The Counter-Reformation also argued that the blasphemous words and deeds of the dissidents may bring divine wrath upon the nation. Cases of attacks by Calvinists and Antitrinitarians on Catholic services and processions, or assaults upon priests, which occurred sporadically in the XVII-th century, lend credence to this theory.” (p. 168). [This reminds us of the lewak and LGBT desecrations of Catholic Churches in Poland today, all in the name of “tolerance”.]

LONG-TERM PERSISTENCE OF POLISH RELIGIOUS TOLERATION; ITS DECLINE NOTWITHSTANDING

Tazbir comments, “In the sixteenth century Poland did not experience any civil wars of political, social, or religious nature.” (p. 10).

The author then keeps things in perspective as he writes, “In the first half of the XVII-th century religious tolerance in Poland gradually declined. Conditions were still far removed from the persecution of Calvinists in Lutheran principalities in Germany, or of Catholics in England, but the position of the Protestants definitely deteriorated.” (p. 163).

What about conversions to another religion? Tazbir notes that, “On the other hand, abandonment of the dominant religion had been punishable by exile in England, the Netherlands and Scandinavia long before it became so in Poland.” (p. 197).

Attacks on Poland for being “intolerant” are especially ironic in view of the following, “This was a far cry from the days of former tolerance in Poland, but Polish conditions still presented a contrast to those in contemporary western Europe, in nations which later charged the Poles with fanaticism. Protestants were excluded from parliament in 1718 (formally not until 1736), but they were re-admitted fifty years later, though in limited numbers. In France the Huguenots did not win that right until the Revolution; Calvinists were denied civil rights in France until 1787 (their marriages were held invalid and the children from of them illegitimate). Legal restrictions against Catholics existed in England until 1829, in Sweden until 1849. In Poland, on the other hand, all the previously enacted anti-Protestant restrictions were repealed in 1768 and 1773; Protestants were barred only from cabinet posts, the senate and the top crown offices. Finally, the Constitution of May 3-rd [May 3, 1791] reserved the throne and the cabinet for Catholics only, granting to all other denominations ‘peace in their faith and state protection’, as well as ‘freedom of religion’.” (p. 201).

RELIGIOUS ISSUES AND POLONOPHOBIA: THE CASE OF MAGDA TETER

By way of introduction to this age-old subject, Tazbir writes, “Moreover, the propaganda of aggressive states hostile to the Commonwealth accused the Poles of religious fanaticism. They did all they could to erase the fame of the well-known ‘refuge for heretics’, as Poland was called in sixteenth century Europe.” (p. 15). That was centuries ago: Magda Teter is now.

Adam Kazmierczyk, in reviewing Teter’s Sinners on Trial, in which she disputes Tazbir’s conclusions on Polish religious tolerance, exposes her dubious methodology. Magda Teter assumes that Polish secular authorities are actively promoting Catholicism over other religions. He comments, “Consequently, the author assumes that secular courts decided in matters of faith and became a tool in the struggle for a Catholic Poland. The author’s assumptions are disputable.” (p. 143). [This research article in in Scripta Judaica Cracoviensia 10:142-145. (2012)]

Now consider David Frick, who wrote a 2012 online article on H-Judaica, reviewing Magda Teter and her Sinners on Trial:
https://www.h-net.org/reviews/showrev.php?id=33033

Frick concludes that, in her attempts to rebut Tazbir, Magda Teter is greatly exaggerating the religious-based death penalty imposed upon non-Catholics:

“My work in the various legal fora of Wilno (Vilnius, Vilne) for the seventeenth century suggests that we should be cautious about making generalizations about Polish-Lithuanian society as a whole based on data from one place and time. I have not found a single case of secular courts passing judgment on matters of religion, much less imposing capital punishment for such a crime. The one case of the alleged theft of a ciborium by Jews that I did encounter was heard by the Roman Catholic consistory and resulted in the accused making an oath, more judaico, in the main synagogue, over the Torah scroll, and being declared innocent. My argument that what Teter finds elsewhere did not happen in Wilno could be linked to gaps in my archival sources; still, the financial records for the city, complete beginning in 1663, always listed payments to the municipal mistrz (“master,” i.e., executioner), and they give the impression that he was not a very busy man, and that hardly any of the crimes punished had anything to do with what could be termed sacrilege.”

In conclusion, Magda Teter has not proven that many people were burned at the stake in Poland for religious offenses. Until and unless she does so, we must conclude that she is wrong, and that Tazbir’s classic work stands intact.

There is more. As noted earlier, the Christians got the idea, to persecute religious dissenters, from Judaism. It is therefore a bit ironic for Magda Teter to be repeating Jewish narratives by moralizing about the “intolerance” of the Catholic Church.