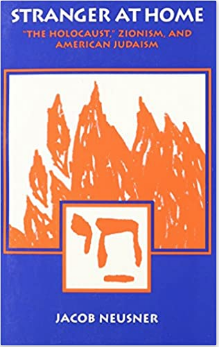 Holocaust Supremacism Repudiated Because It Slights the Genocides of Non-Jews

[Review based on 1981 edition.] Jewish author Jacob Neusner notes that modes of thinking and behavior may have originated from non-Jews, but “became Jewish” by being adapted by Jews as their own. For instance, the Talmudic dialectic did not originate with Jews. It found derivation from Greek forms of rhetoric, as well as ancient Roman principles of legal codification. (p. 49).

CARDINAL HLOND WAS RIGHT ABOUT JEWS AS FREETHINKERS

The author stresses that American Jews are very secular (p. 46, 189, 192-193), and explores the modes of their self-identity as Jews. He sees synagogue attendance as a cultural event, in which the synagogue serves as a living museum of once-held beliefs and archaic liturgies, similar to the way that an art museum contains paintings whose style is not used any more. (p. 44).

There are various forms of Zionism, and one extreme form, the SHELITAT HAGOLAH, proposes that all Jews in the Diaspora are doomed to extinction through assimilation or through another Holocaust. The latter sounds very anti-Christian, as they speak of such Jews “singing Christmas carols in the gas chambers.” (p. 207). Neusner, on the other hand, re-defines Zionism to mean, “The Jewish people are my homeland.” (p. 135).

JEWS AS THE “OTHER”: JEWS PARTLY AT FAULT

Poles are often faulted for once having seen Jews as the “other”. However, this very much also came from the other direction. Neusner points out that assimilation is a relatively recent development and that it came about when Jews began to think of themselves as living not merely among the gentiles, but with them. Although he does not use the following terms, he realizes that, in this paradigm shift, Jews stopped thinking of themselves primarily as the “other”. He comments, (quote) Jews not only knew they were different from others, but regarded those differences as a matter of destiny. The statement in the ALENU [ALEINU] prayer, “Who has not made us like the gentiles,” was a matter of thanksgiving, pride, and joy, a self-conscious articulation of Israel’s unique peoplehood …But before Jews, whether Reform or Orthodox, could conceive of themselves in such a new situation, they had to affirm modern culture in a way in which they never accepted or affirmed the cultures of ancient and medieval times. (unquote). (p. 52).

PROMOTION OF THE HOLOCAUST OVER THAT OF OTHER GENOCIDES: AN INJUSTICE TO NON-JEWISH GENOCIDES

The author notes that “the Holocaust” has become part of the civil religion of Israel. (p. 88). It also plays a major role in the self-identity of American Jews. (p. 89). [In extremes, this leads to Holocaust supremacism and Holocaustianity.]

Although Neusner does not examine it from this angle, he does allude to the fact that the promotion of the Holocaust in American culture has elevated the Nazi genocide of Jews to a privileged position over that of other genocides. He comments, (quote) And now we have the President’s [Jimmy Carter’s] Holocaust Commission, which raises the whole business above the level of parochialism and provinciality…Not a few Jews find the Holocaust Commission puzzling. There has not, after all, been a commission created to memorialize the Armenian massacres of World War I (the first major act of genocide in this century), or the political violence and mass murder of Stalinist Russia and Maoist China, let alone the Nazi war against the Poles, Russians, South Slavs, Slovaks, and other people deemed by the racist WISSENSCHAFT to be subhuman. (unquote). (p. 85).

Prejudices between Jews and non-Jews go both ways. In his glossary, Neusner defines GOYIM as follows, “Gentiles, not always pejorative.” (p. 205). As for the consequences of assimilation, the author quips, “Jews no longer look down on GOYIM, for they feel like them.” (p. 177). However, Neusner still finds a lingering Jewish prejudice against the GOYIM, and implicitly rejects the exculpation that anti-goyism (not his term) is merely a reaction to persecution and anti-Semitism. He comments, (quote) We who preach brotherhood so self-righteously to our fellow citizens preserve in our hearts the least edifying part of our heritage, the hostility to gentiles, which in less fortunate ages could at least be understood, if not condoned, against the background of obsessive hatreds. One hears Jews speak quite freely of all non-Jews as “GOYIM,” which is not always a complementary epithet, while those complex differences which separate one gentile from another, which make of one a Christian and of another a pagan, or fascist or a secularist, are ignored. (unquote). (p. 32).

[Does the latter statement undermine the exculpation of the anti-pagan verses in the Talmud not applying to Christians?]