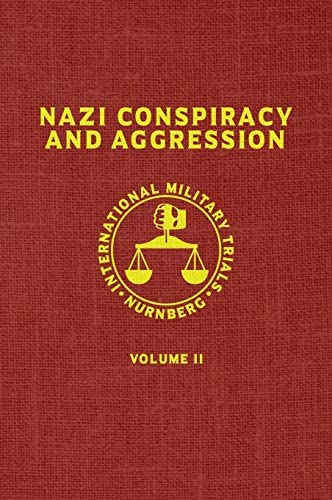 These two volumes comprise the documents that were used as part of the Nuremberg Trials. They harken back to a bygone era when all the victims of the Nazis were treated with equal attention and moral urgency. Here are some highlights:

The authors comment, “They [Nazi Germans] conducted deliberate and systematic genocide, viz., the extermination of racial and national groups, against the civilian populations of certain occupied territories in order to destroy particular races and classes of people and national, racial or religious groups, particularly Jews, Poles and Gypsies and others.” (Volume 1, pp. 31-32).

The following are some revealing secret statements, made by Wundt to Wilhelm Keitel, four months before the 1939 German conquest of Poland, “The Pole is no ‘supplementary enemy’. Poland will always be on the side of our adversaries. In spite of treaties of friendship, Poland has always had the secret intention of exploiting every opportunity to do us harm.” (Volume 1, p. 391).

NAZIS JUXTAPOSED POLES AND JEWS AS OBJECTS OF CONTEMPT AND PERSECUTION

Far from engaging in redemptive antisemitism, or solely treating Jews as existential enemies and as the only scapegoats, the Nazis explicitly mentioned Poles and Jews in the same condemnatory statements. For example:

“With regard to Poland, the affidavit of Lahousen reports Ribbentrop participation in a discussion on 12 September 1939 on the Fuehrer’s train concerning the extermination of Poles and Jews (Affidavit A).” (Vol. II, p. 512).

Hans Frank is thus quoted: “Any tendencies towards the consolidation of conditions in Poland are to be suppressed. The ‘Polish muddle’ [polnische Wirtschuft] must be allowed to develop. The government of the territory must make it possible for us to purify the Reich territory from Jews and Polacks, too.” (Vol. II, p. 631).

“On 18 September 1942, Thierack, the Reich Minister of Justice, and Himmler came to an understanding by which antisocial elements were to be turned over to Himmler to be worked to death, and a special criminal procedure was to be applied by the police to the Jews, Poles, gypsies, Russians, and Ukrainians who were not to be tried in ordinary criminal courts. (654-PS)” (Vol. II, pp. 292-293).

“A letter from RSHA (Reich Security Main Office) to police chiefs, dated 5 November 1942, recites an agreement between the Reich Fuehrer SS and the Reich Minister of Justice, approved by Hitler, providing that ordinary criminal procedure was no longer to be applied to Poles and members of the Eastern populations (G316). The agreement provided that such people, including Jews and Gypsies, should henceforth be turned over to the police.” (Vol. II, p. 57).

POES AND OTHER SLAVS ALSO EVENTUALLY FACED A FINAL SOLUTION

Usually, the Holocaust gets the lion’s share of the attention, and all the other genocides are simply crowded out. At other times, however, Holocaust supremacists try to minimize the Nazi genocide of Poles through various rhetorical devices. They tell us that Poles were “merely” in the way of German territorial ambitions. They would have us believe that, whereas Jews were slain solely for being Jews, the Poles had to break some German rule before they would be put to death. Or they reassure us that Poles were “only” to be made into slaves, and that, in any case, “only” 10% of the Polish population was slain. Some Holocaust supremacists have gone as far as saying that, whereas Jews were killed because they were Jews, Poles were killed “only” because it was war.

Against such obscene and racist nonsense, we must realize that Nazi German exterminatory ideas and policies were directed at Poles as Poles, just as they had been directed at Jews as Jews. Neither had anything to do with military or political events. The following statement makes it clear:

Martin Bormann, a close associate of Hitler, said, “Therefore compulsory vaccination and German health services are superfluous. The fertility of the Slavs is undesirable. They may use contraceptives or practice abortion, the more the better.’” (Vol. II, p. 904).

There is more proof that the Germans targeted Poles as biological entities. Although the Nuremberg proceedings stopped short of calling the German hunger policies genocide, they made it obvious that such was the case:

“The extent of the undernourishment of the Polish population was reported to Frank in September 1941 by Obermedizinalrat Dr. Walbaum: ‘Obermedizinalrat Dr. Walbaum expresses his opinion of the health condition of the Polish population. Investigations which were carried out by his department proved that the majority of Poles eat only about 600 calories, whereas the normal requirement for a human being is 2,200 calories.’” (Vol. II, p. 637).

We keep hearing that Jewish forced laborers were only temporarily diverted from the gas chambers. Not quite. Polish forced laborers also faced eventual death once the Nazis no longer needed their labors. Put in broader context, the fate of Poles, just like the fate of Jews, hinged on whether the Nazis still found them useful. Neither Poles nor Jews had the right to live under the Third Reich. The authors write:

“As for the Poles and Ukrainians, [Hans] Frank’s attitude was clear. They were to be permitted to work for the German economy as long as the war emergency continued. Once the war was won, he told the District Standortfuehrung and Political Leaders at a conference at Cracow on 14 January 1944: cc* * * then, for all I care, mincemeat [Hackfleisch] can be made of the Poles and the Ukrainians and all the others who run around here-it does not matter what happens.” (2233-BB-PS)” (Vol. II, p. 633).

“[Martin] Bormann also imposed his views on the administration of the occupied areas and insisted on the ruthless exploitation of the subjected populations in the East. His views were stated in an official memorandum of the Ministry for the Eastern Territories, headed by Rosenberg, in which they were described as governing actual administrative practice in the East: ‘The Slavs are to work for us. In so far as we don’t need them, they may die.’” (Vol. II, p. 904).

Consider the Polish forced laborers. Their deportation into the Third Reich, on a massive scale, went beyond fulfilling German labor requirements. The authors comment, “They planned to deport all able-bodied Polish workers to Germany for work in the Nazi war machine. This was to serve the two-fold purpose of helping to satisfy the labor requirements of the Nazi war machine and preventing the propagation of a new generation of Poles.” (Volume 1, p. 1024).

THE NUREMBERG TRIALS DID NOT MINIMIZE THE JEWS’ HOLOCAUST. FAR FROM IT

Nowadays, Jews sometimes complain that the Nuremberg Trials glossed over the Jewish experience under the Nazis. Is this so?

Note that the words Jew… (Jew, Jews, Jewish) are mentioned no less than 746 times in Volume 1 and 1,064 times in Volume II. This work also unambiguously states the fact that the Nazis murdered 5 million Jews. (Vol. II, p. 3).

It is quite likely that Jewish complaints about the Nuremberg Trials owe to the fact that the trials did not quite elevate the Jews’ Holocaust over that of other victims of the Nazis. That’s what it’s all about.

Holocaust Supremacists Debunked. The Nazi German Genocide of Poles in the Light of the Nuremberg Trials. Existential Enemies. No Redemptive Antisemitism. USA Office…