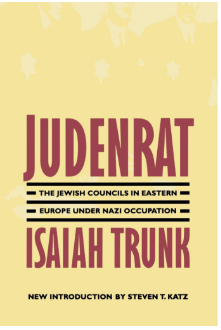 Trunk’s subject is the Jewish Councils in the ghettos of Nazi-occupied Eastern Europe, organizations designed “”to serve only one purpose — to execute Nazi orders regarding the Jewish population.”” The book examines the Councils’ welfare activities, their servile relation to the Nazi authorities, and their “”local control”” administration.
In an understated, matter-of-fact way Trunk documents the prevalent favoritism and corruption of many Council members and shows how Council taxes, which in large part went to pay salaries, fell most heavily on the poorest ghetto inhabitants. Along with the well-known brutality and self-aggrandizement of ghetto police, the horrifying caricature of a competitive society within the whole ghetto is described. Perhaps.
https://www.kirkusreviews.com/book-reviews/isaiah-trunk/judenrat-the-jewish-councils-in-eastern-europe-/
previous post