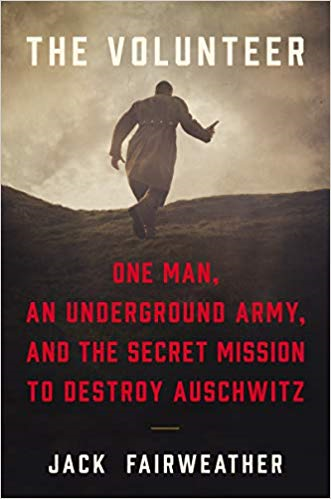 The incredible true story of a Polish resistance fighter’s infiltration of Auschwitz to sabotage the camp from within, and his death-defying attempt to warn the Allies about the Nazis’ plans for a “Final Solution” before it was too late.

To uncover the fate of the thousands being interred at a mysterious Nazi camp on the border of the Reich, a thirty-nine-year-old Polish resistance fighter named Witold Pilecki volunteered for an audacious mission: assume a fake identity, intentionally get captured and sent to the new camp, and then report back to the underground on what had happened to his compatriots there. But gathering information was not his only task: he was to execute an attack from inside—where the Germans would least expect it.

The name of the camp was Auschwitz.

Over the next two and half years, Pilecki forged an underground army within Auschwitz that sabotaged facilities, assassinated Nazi informants and officers, and gathered evidence of terrifying abuse and mass murder. But as he pieced together the horrifying truth that the camp was to become the epicenter of Nazi plans to exterminate Europe’s Jews, Pilecki realized he would have to risk his men, his life, and his family to warn the West before all was lost. To do so, meant attempting the impossible—an escape from Auschwitz itself.

Completely erased from the historical record by Poland’s post-war Communist government, Pilecki remains almost unknown to the world. Now, with exclusive access to previously hidden diaries, family and camp survivor accounts, and recently declassified files, Jack Fairweather offers an unflinching portrayal of survival, revenge and betrayal in mankind’s darkest hour. And in uncovering the tragic outcome of Pilecki’s mission, he reveals that its ultimate defeat originated not in Auschwitz or Berlin, but in London and Washington.

The book can be purchased on Amazon: https://www.amazon.com/Volunteer-Underground-Mission-Destroy-Auschwitz/dp/0062561413/

There are many better books about Witold Pilecki. For instance, there is BEYOND BRAVERY by Pilecki himself.

The present book is all about author Jack Fairweather including things that have nothing to do with Pilecki or his mission, and repeating the standard Pole-blaming memes, such as:

• Poland’s presumed bad treatment of her PreWWII minorities (pp. 8-9). [“Bad”–compared with what?]
• Boycotts of Jews (p. 9) [All context-free]
• Prewar Polish violence against Jews (p. 9). [No scale or perspective: Mountains out of molehills].
• Polish anti-Semitism (p. 22) [What else?]
• Physical Polish attacks on Jews during the German Occupation (pp. 40-41) [No scale or perspective: Mountains out of molehills.]
• Polish doctors, at Auschwitz, treating Jewish patients “quickly” (p. 136) [Who is holding the stopwatch?]
• Nazis did not do systematic murder on Poles, only on Jews (p. 177) [Absolutely false]
• Polish killings of Jews in the east, and Poles suppressing facts about it (p. 184) [How so?]
• Gratuitous remarks about “Poland’s prewar inequality” (p. 227) [Compared with what?]
• Insinuation that “Polish nationalists” wanted to keep Auschwitz as a symbol of Polish suffering (p. 289) [How about universalism?]
• Wholesale Nazi German extermination of Poles “ruled out” (p. 293) [Absolutely false]
• Polish staff at Auschwitz giving verbal jabs, and kicks, to the Jews to show them they are the ones on the bottom of the Nazi German hierarchy (p. 327) [Amazing assertions]
• AK Commander Bor Komorowski “generally avoided confronting the anti-Semitic elements of the resistance” (p. 357) [Manipulative. And who was Bor: A thought policeman?]
• Poles killing Jews during the 1944 Warsaw Uprising (p. 384, 498-499) [Long Debunked]
• Polish Underground not investigating such alleged killing of Jews (p. 384) [For what purpose?]
• Postwar Auschwitz treated by Poles “on Christian terms” (p. 400) [Actually, universal terms]
• Postwar Polish looters at Jewish murder sites (p. 401) [A triviality. Happened everywhere—and not only to Jews]
• Poles blame Jews for Communism (p. 402). [For good reason.]
• Witold Pilecki never saw the suffering of Jews as a symbol of humanity (p. 413). [Who says that he was supposed to?]
• Complaints about Jews being an “unwanted element” among Poles (p. 443) [No context]
• Witold Pilecki’s semi-derogatory characterizations of Jews (p. 469) [Really?]
• Polish Underground not mentioning the Jewishness of the Sonderkommando and their revolt (p. 483) [Horror of horrors.]
• Polish anti-Semitism yet again (p. 496) [What else?]