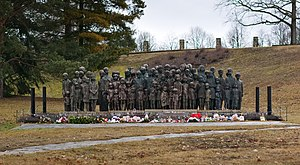 In June 1942, the Czechoslovakian town of Lidice was destroyed by Nazi occupying forces in retaliation for the assassination of Reinhard Heydrich, a high ranking Nazi official.

Jaroslava Sklenickova lived in Lidice at the time and survived. She spoke to Witness about the time.

Witness is a World Service radio programme of the stories of our times told by the people who were there.

The Battle of Warsaw. The Miracle You’ve Never Heard Of. [Video]