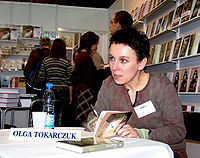 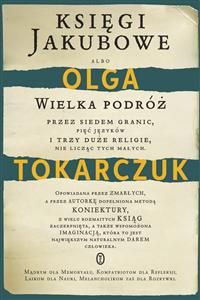 THE BOOKS OF JACOB, is the title of this book, written by the Ukrainian-descent author Tokarczuk, a 2018 Nobel Prize in Literature winner. The reader can immediately sense the unfocused nature of this book, and wonder if Tokarczuk won the Nobel Prize for her writing talents, for her radical leftist views (at variance with the views of most Poles), or some combination of the two.

In any case, Tokarczuk is unquestionably an icon of the left-wingers. Poland’s leading leftist newspaper, the George Soros funded Gazeta Wyborcza, made a miserable martyr out of her just because some Polish patriots had dared to disagree with her.

Oddly enough, the chapters of this book are written from right to left. Did Tokarczuk do this in order to highlight her Judeocentrism, or was this more an attention-getting gimmick? She dismisses the conventional way of writing as “a matter or habit.” (p. 20).

In this large volume, Tokarczuk focuses on Jacob Frank and the Frankist movement. Consistent with the fact that she is an atheist, Tokarczuk also takes some pot shots at the Christian religion throughout her book, as I elaborate later.

A STILTED PORTRAYAL OF THE FRANKIST MOVEMENT

It is clear that Tokarczuk presents a selective, Judeocentric view of the Frankist movement. She frequently mentions the Talmud, the Kabbalah, etc., but sanitizes them of the antigoyism and anti-Christianity that is in them. For instance, see my reviews of:

lga Tokarczuk focuses on ritual murder trials (p. 21, 267, 270, 519) but never tells the reader that they were very rare, as pointed out in my review of The Mixed Multitude (linked above). In addition, she fails to inform the reader that Jews had similar beliefs about the “other”. See, for example:

She writes of a Christian convert to Judaism getting burned at the stake. (p. 408). Did this actually happen? (A similar account, of Walentyn Potocki, an alleged convert from Catholicism to Judaism, is widely regarded as a legend.) In any case, burning at the stake was very rare, especially in Poland, but one would never realize this by reading Tokarczuk.

TOKARCZUK RUNS DOWN THE CHRISTIAN RELIGION

Author Tokarczuk mentions Jews accused of host desecration (p. 763), as if going out of her way to make Jews victims of the big, bad Christians. In fact, there is evidence that at least some host-desecration accusations, against Jews, were factual:

She praises Freemasonry, as if it was some kind of innocent universalist movement. (p. 160) It was not. See:

Atheist Tokarczuk portrays religion as something that divides people according to “who is better and who is worse”. (p. 160). What she conveniently forgets is that her fellow left-wingers are masters at dividing people, especially by class and race. That is why, for example, we had Communism, and why we now have its successor–cultural Marxism. And leftists are not above dividing people by religion, as they do when they insinuate that Poles are a bad people because they want their own nation as it is, predominantly Catholic, and won’t accept masses of Islamic immigrants (although they do accept Ukrainians, including her ancestors.)

Tokarczuk engages in other forms of relativism. She brings up the Paraguay Indians, which, according to her, have an older religion, Scriptures, and customs than do the Christians. (pp. 390-391). In making this talking point, she is confusing the age of a religion with the truth of the religion.

TOKARCZUK INVERTS THE TRUTH ABOUT JEWS IN POLAND

The author complains that Poles won’t give Jews full rights, and that, “You either become a Catholic, or you will remain nobody.” (p. 491). This is nonsense, and a complete inversion of the truth. To begin with, Poland’s Jews had more rights than Polish peasants, that is, the majority of Poles. Poland’s Armenians and Tatar Muslims also held on to their non-Catholic religions, yet they joined Poland. Jews did not. See:

For centuries Jews hung on to their extreme particularism and separatism, and looked down on the goyim as inferior to them. This was especially true in Poland, where there were so many Jews. See my review:

Tokarczuk lambastes a bishop for suggesting that Jews were a tribe that was diabolical, deceitful, and stubborn (p. 635), but never informs the reader of the repulsive Jewish conduct that precipitated such thinking. To her, everything is the Poles’ fault, and Jews were pure as the driven snow. They were not. See, for example:

Olga Tokarczuk sticks up for the Jews, who were accused, merely because they were “unbelievers”, of aiding the invading Swedes. (p. 764). It’s the eternal Jewish scapegoat meme yet again. Not quite. Jews were guilty as charged. See: