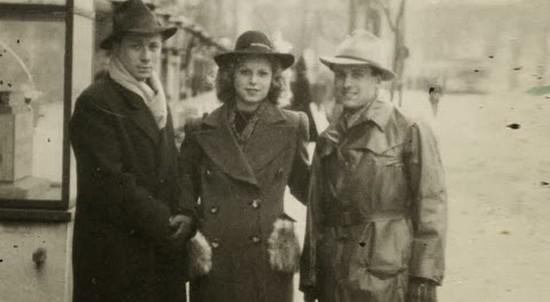 The greatest fear of the Jews hiding from the Germans during World War II were people who in exchange for money tracked down and sent to death. In Berlin, the most notorious Greifer (“the catcher”) was not a fanatic Nazi, not even a German, but … Jewish woman – Stella Kübler.

Stella Goldschlag – because that was her maiden name – was born on July 10, 1922 in the family of assimilated Berlin Jews. She was lucky that nature gave her a remarkably “Aryan” appearance. She was a tall, slim blonde with blue eyes, which in no way indicated her Semitic roots. However, in Nazi Germany she still suffered from harassment related to the increasingly restrictive anti-Jewish law.

At first Stella’s story did not differ from the fate of thousands of German Jews forced to wear the disgraceful yellow star of David and almost slave labor for the sake of the “thousand-year Reich.” Stella found employment in one of Berlin’s arms factories, and in 1940 she married a musician Manfred Kübler.

The situation changed as a result of the so-called Fabrikaktion (factory action) of February 27, 1943, which was the final roundup of Berlin Jews. As a result – as he writes in his book, “Hitler’s Capital: Life and death in war Berlin,” Roger Moorhouse – officers of the Gestapo and SS carried out raids on many capital industrial factories and detained local Jewish workers.

It is true that Stella and her family managed to temporarily avoid capture, but they had to start life in hiding and in constant fear. They became so-called “U-Boats”, also referred to as “divers” (Taucher).

At first everything was going well. Stella’s “Aryan” look and “papers” provided by the great counterfeiter Guenther Rogoff allowed her to look with optimism into the future. However, these were only appearances, because Stella was in the crosshairs of one of the “catchers”. This resulted in her being arrested on July 2, 1943. A few weeks later, her parents also fell into the hands of the Gestapo executioners (her husband had already returned to Auschwitz in spring, from where he never returned).

During interrogations she was subjected to brutal torture. First of all, it was hoped that information on the location of Rogoff, the counterfeiter, could be learned from it. In this case, the Gestapo did, however, miscalculate; Stella simply did not know where the counterfeiter of interest was staying. At the same time, severe beatings and two unsuccessful attempts to escape eventually broke her and she agreed to the offer of becoming a “catcher”. Not without significance was also the promise that cooperating with the Gestapo, Stella would save her parents’ life.

As Roger Moorhouse tells in his book: Stella quickly became a model “catcher”. The officers were already impressed by her ingenuity […]. When she began to work for them, she absolutely did not disappoint – she had an excellent memory of names, dates and addresses, and her unconstrained coquetry was a real weapon of mass destruction.

Thanks to the extraordinary “efficiency” she quickly gained in the environment of Berlin “divers” the name “blond poison”. Her picture circulated among the fugitives as a form of warning. As soon as she entered a restaurant or cafe, every Jew would run away.

Apparently, she was able to capture up to 60 Jews in one weekend. She received 200 marks for each. We will probably never know the exact number of her victims, but it is estimated that she sent from several hundred to even several thousand people to a certain death!

Despite the zeal manifested, Stella did not manage to save her parents who were sent to Auschwitz, where they died. The woman remained an active “catcher” until the end of the war. In 1945 she was arrested by the Soviets and sentenced to 10 years of hard labor.

Later, however, she was released and never really answered for her crimes. In 1994, she committed suicide at the age of seventy-two. Was it the burden of the acts committed that haunted her to the last days of her life? If so, why did she kill herself after 50 years?