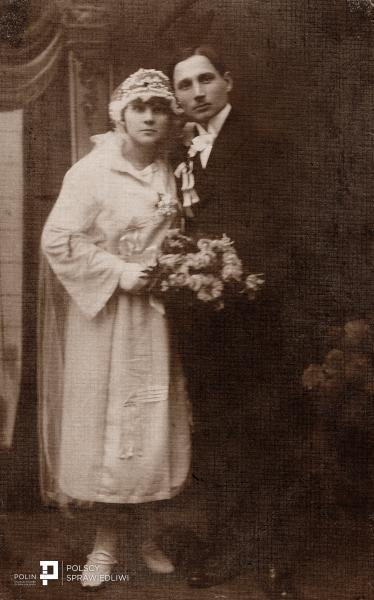 During the German occupation, Stanisław and Franciszka Kurpiel lived with their six children in the Leoncin farm near Krasiczyn (Podkarpackie Province).

In 1942, the Germans sent cattle from the contingents to their property and the Jews from the ghetto in Przemyśl were assigned to guard it. They made contact with Stanisław Kurpiel, who agreed to hide them. The Kurpiels decided to hide 30 Jews, including the Rubinfeld, Golinger, Spiegl, and Rubin families.

On May 21, 1944, about 20 Ukrainian policemen surrounded the Kurpiels’ buildings, searched, and found the hidden Jews. Then they led the Polish family and the Jews outside. The Jews were shot. Only one person managed to escape from the place of execution. She survived the occupation.

Stanisława and Franciszek Kurpiel were taken to the Gestapo prison in Przemyśl. A month later, they were both shot in the Lipowica fort.

From the findings of historians based on the accounts of witnesses of these dramatic events, it appears that the Kurpiel family could have been betrayed by one of their neighbors, or the Germans had been suspicious of large food purchases that Mrs. Kurpiel made in Przemyśl.

In 2017, Stanisław and Franciszka Kurpiel were posthumously honored by being awarded the Commander’s Cross of the Order of Polonia Restituta for their heroism and sacrifice to save the lives of other human beings.

Franciszka and Stanisław Kurpiel were murdered for helping Jews (….) They helped even though they had six children. They decided to take a significant risk. In October 1941, the Germans issued a decree ordering the penalty of death for those who not only hid the Jews but for anybody who aided the Jews in any way. Despite this risk, the Kurpiels decided to do this heroic act.

– said Dr. Mateusz Szpytma, the vice-president of the Institute of National Remembrance, during the ceremony.