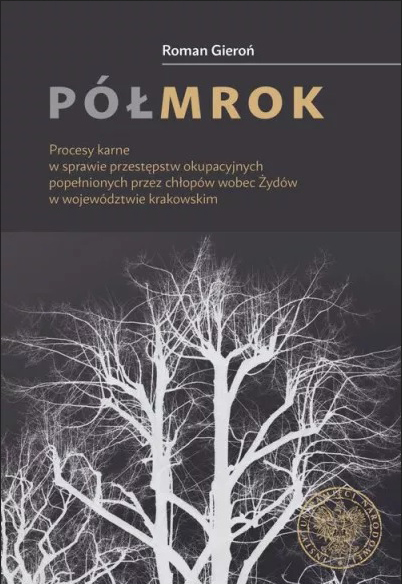 Dusk: Judicial punishments for peasant misconduct against Jews, during the occupation within the Krakow Voivodeship

DUSK: JUDICIAL PUNISHMENTS FOR PEASANT MISCONDUCT AGAINST JEWS, DURING THE OCCUPATION, WITHIN THE KRAKOW VOIVODE is the title of this landmark Polish-language study conducted by the IPN.

The postwar court cases, involving Poles accused of betraying and killing Jews, a consequence of the August Decree, are themselves of limited significance. They do not allow a reckoning of the scale of Polish acts against Jews. (p. 334). There are some misconceptions about these trials, however, that I address in my review.

AUGUST DECREE: A SHORT HISTORY. USE OF MANIPULATION AND TORTURE

This Decree, declared on August 31, 1944 (p. 249), and going into effect on September 13, 1944, invoked matters that were foreign to Poland’s prewar justice system (p. 272). It put much emphasis on the punishment of collaborators. (p. 92, 250). Successive versions of the August Decree, coming out a year and two later, accentuated the accusations of collaboration, and included more indirect forms of collaboration. (pp. 192-193). The use of assessors (LAWNIKI), acting alongside the judges, and using special punitive courts, facilitated the prosecution of those accused of collaboration. (p. 251).

Most of the prewar Polish judiciary had been murdered the Germans: Only some 3,500 judges and procurators survived the war, and only a fraction of these were re-appointed by the new Soviet-imposed Communist authorities. This, of course, enabled the Communists to appoint many judges of their liking. In addition, the setting up of appellate courts, and the concentration of August Decree cases heard by them, made it easier for Communists to be involved in the legal process. (p. 256). Finally, the Communist authorities allowed those lacking university legal training to become judges and lawyers. This allowed them to flood the Polish judiciary with those especially compliant to Communist directives. (p. 259). This became even more so because of the assessors that served alongside the judges. (p. 265).

Among scholars of the Decree, Andrzej Pasek and Elzbieta Raczy support the premise that the August Decree was tainted by Communist involvement. (p. 276). Here are some examples:

Polish Communist security forces (Bezpieka) were trained by the NKVD in Kuibyshev, USSR. (p. 100). The Bezpieka copied Soviet methods of interrogation, including the use of torture. (p. 163, 165). The August Decree became a tool with which to especially accuse former Polish Underground members (A. K. and BCh) of denunciation and murder of Jews. (p. 161). There is much evidence of forced confessions, notably, but not only, of those that had been in the Home Army (A. K.) or the BCh. (p. 154, 163, 330). Defendants were forced to affirm and sign scripted Bezpieka accusations. (pp. 158-159). In view of the fact that most of the accused peasants were poorly educated (pp. 173-174), how did this affect their vulnerability to being framed? For more on the U. B. (Bezpieka) torture procedures, see:

Testimonies were changed or manipulated by the Bezpieka. (p. 330). In 36% of the cases, the accused changed their story: Saying something during the trial which differed from what they said when they had been interrogated by the U. B. This was done in large part because of the use of physical force during the interrogations. (p. 155, 330; See also p. 269).

“LENIENCY” TOWARDS THOSE ACCUSED OF HARMING JEWS?

In the Krakow area, out of 124 accused peasants, half were exonerated, and this is comparable to later (1950) figures. (p. 286, 273). Andrew Kornbluth, in his THE AUGUST DECREE, accuses the Polish authorities of not valuing the lives of Jews, and of engaging in other forms of (what else?) antisemitism. These are multiple falsehoods.

To begin with, the “leniency” was true of the appellate courts, which dealt with the cases involving the August Decree, but was not true of other courts. The other courts exonerated only 3.6% to 18.6% of the accused. (p. 273).

Author Roman Gieron identifies the real reasons for the “leniency” of the appellate courts, and elaborates on them. (p. 287). To begin with, many of the court cases had not been properly prepared. The U. B. that filed the charges often lightheartedly believed the accusations against the accused. Furthermore, many of the accusing witnesses did not present a convincing case against the accused. In fact, quite a few of the accusations were driven by private vendettas. In the end, many of the assessors (LAWNIKI) were of the opinion that the August Decree was too harsh in its dealings with accused collaborators, and adjusted their sentences accordingly. (p. 287).

Other factors also came into play. Relatively few of the accusations were based on eyewitnesses, and there was much hearsay. (p. 113, 117).

Finally, the major reason for the “leniency” against the accused was simple: The German occupation was brutal, and German penalties for non-compliance were severe. (p. 245, pp. 277-278, p. 302). Even the Communist courts that enforced the August Decree were forced to recognize the fact that Polish peasants were ruled by a “psychosis of fear” induced by the German terror. (p. 333).

I now elaborate on some of this:

NO JUDENJAGD IN THE POLISH COUNTRYSIDE: SOME REALITIES OF THE GERMAN OCCUPATION

The Polish soltys (village mayor or village headman) was under the tight control of the Nazi German occupation authorities, and was forced to become an unwitting tool in the German exploitation of Polish villages. The Germans forbade a soltys from resigning his post: Doing so was equated with conducting sabotage. (p. 179). The village headman was forced to gather the agricultural produce that the Germans would confiscate, and was forced to gather and capture those Poles that the Germans wanted deported into the Reich for forced labor. (p. 72, pp. 179-180).

The German authorities forced the soltys to arrest all suspicious persons, and to deliver those without proper documentation to the German police stations. (p. 180). In 1942, the Germans ordered the village headmen of all villages to report all fugitive Jews, and later to apprehend and turn over all such fugitive Jews to the German police stations. (p. 180). The soltys was threatened with death for failure to comply. (pp. 181-182).

There still were fugitive Jews. The Germans would summon the soltys to their police stations, and tell them that they knew that there were fugitive Jews hiding in or near the village. When the village headman would deny this, the Germans would say, “We know very well that Jews are there. You have seven days to ‘take care’ of these Jews. If, after this time, we determine that Jews are still there, we will slay and burn half the village.” (p. 181).

Other factors also had an impact on the August Decree. German rules did not only command the Poles to refrain from any sort of help to fugitive Jews: They also required Poles to report fugitive Jews. (p. 201, 237, 333). The Germans murdered not only those caught hiding Jews, but also their entire families. (p. 214). Fugitive Jews that fell into German hands often betrayed other Jews in hiding, as well as the Poles who had helped them. (p. 215).

The Germans forced firemen and foresters to search for fugitive Jews, escaped Soviet POWs, Polish guerrillas, and common criminals. (p. 186).  They also forced Polish villagers to take part in manhunts for fugitive Jews. (p. 201). It cannot be ruled out that some Poles participated willingly, but author Roman Gieron points this out as a possibility, not a proven fact. (p. 201).

Disease under the German occupation was rampant. Tuberculosis rates doubled over prewar rates, and 10% of the Polish population was infected, with some districts having a 30% infection rate. (p. 75). Dysentery and typhus were also prevalent and, in Niegowic, half the population had dysentery. (p. 76). In 1944, in Tarnow County, some 30% of Poles had influenza. (p. 76).

The demoralization of Polish society, caused by the German terror, did not just affect fugitive Jews. In the Krakow area alone, there were 100-200 acts of mostly Pole-on-Pole banditry in just one month. (p. 76). Those who cite the August Decree make a big deal about Polish harm to Jews, but they need to also remember Polish harm to other Poles.