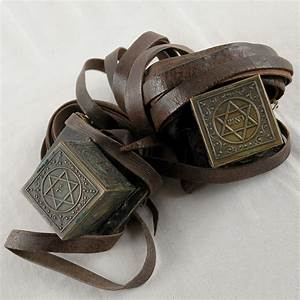 On Monday, January 25, 2021, the Israeli portal “Israel Hayom” informed that a bunker with hundred-year-old phylacteries [boxes with quotes from the Torah used during prayer – editor’s note ed.]  had been discovered in the former Warsaw ghetto, hidden during World War II. The portal happily informs that the phylacteries were transported to Israel in secret from the Polish authorities. The Jewish portal expresses immense pride in what unquestionably amounts to an act of theft.

Hearing about the sensational discovery from local contacts, European envoys from Shem Olam Faith and Holocaust Institute for Education, Documentation and Research secretly contacted construction workers. After long negotiations and the commitment to keep the transaction secret from the Polish authorities, the phylacteries were handed over to the emissaries. They recently arrived in Israel, where they underwent disinfection and maintenance, the portal reads.

“Israel Hayom” informs that the possession of the phylactery Shem Olam Faith announced in a press release before the conference he will organize on the occasion of the International Holocaust Remembrance Day. The virtual conference, which will be open to the public, will include panels on Holocaust remembrance from an international perspective and will be attended by politicians, spiritual leaders, rabbis and historians from around the world, the article reads.

The Jewish Historical Institute, the POLIN Museum and the Warsaw Ghetto Museum issued a joint statement in which they express outrage at this “shocking situation”. The full text of the statement below:

In connection with the information presented in the Israeli media on the removal of relics from Poland from the Warsaw ghetto site, the Jewish Historical Institute of E. Ringelblum, the POLIN Museum of the History of Polish Jews and the Warsaw Ghetto Museum, as institutions established to protect and commemorate the history of Polish Jews, remind that if an archaeological artifact is discovered during construction or excavation, or an archaeological object is accidentally found, it should be secured and all works suspended to prevent it from possible damage and immediately report such finding to the appropriate institutions: offices of monument conservators and the authorities in the Warsaw City Hall or the police. Similarly, conducting archaeological research or searching for monuments requires the appropriate permission of the provincial conservator of monuments, and the export of artifacts abroad is restricted and strictly regulated by law.

We are outraged by the fact that monuments related to the Holocaust may become the subject of illegal trade. Hence, we appeal to all people who have knowledge of this type of objects to provide information to institutions established for this purpose. This guarantees that they will be properly and professionally secured and thus saved. After conservation, the most valuable monuments are made available to the general public in museums, so that every visitor can join in the preservation of the memory of the material and non-material heritage of Polish Jews.

We hope that the shocking situation described above will be clarified and that no similar incidents will take place in the future.

Zygmunt Stępiński, director of the POLIN Museum of the History of Polish Jews

The illegal smuggling of the recently discovered artifacts brings to mind another incident concerning the discovery of an artifact of historical value  and the illegal behavior on the part of the Jewish institutions.

In 2001, Yad Vashem, a revered institution devoted to Holocaust education and documentation, secretly smuggled from Drohobycz to Israel frescos by Bruno Schulz, a Polish Jewish writer and artist, discovered in a villa in Drohobycz, a village that was part of Poland and is now in Ukraine. On February 9, 2001, Benjamin Geisler, a German documentary producer discovered the frescoes after a long search and during the filming of a documentary.  After an agreement was signed by Israel and Ukraine, the frescoes were never returned to Bruno Schulz’s hometown, Drohobycz.