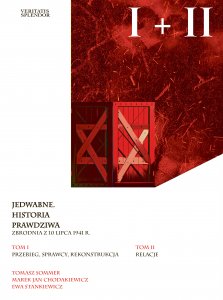 A fragment of the introduction to the upcoming book Jedwabne, Historia Prawdziwa, by Tomasz Sommer, Marek Jan Chodakiewicz and Ewa Stankiewicz

On July 10, 1941, outside Germans carried out a massacre of local Jewish population. The crime took place in stages and no one except the Germans knew that the process would culminate in a horrific mass murder. The occupiers ordered Jews to gather at the marketplace. Simultaneously, the German policemen and military men compelled the local Catholics to participate in escorting and catching these among the adherents of Judaism who failed to obey the order to report in the collection zone.  Once the task was fulfilled, the Catholics were ordered to watch the Jewish people thus assembled. Next, the Germans mass murdered the Jewish inhabitants most likely in two batches.

The above reconstruction of the crime has failed to penetrate in the West in general and in the United States in particular. Instead, disinformation rules.

Presently therefore we shall look at the historiography and editorializing about the massacre. In our earlier monograph about Jedwabne, we described in depth both punditry and scholarship in Poland and abroad, from the initial debates in 2000 through the apex of interest in the case up until 2004.[1] Most of the voices we recorded expressed opinions. They were seldom grounded in fact, but they gave rise to bloviated moralizing that was very much in harmony with the now long established and popular hypothesis of Jan Tomasz Gross, about Polish “neighbors” murdering Jewish “neighbors,” and the Polish “half of the little town” that allegedly exterminated the other, Jewish half.

Since 2004, the controversy has calmed down to a point that no avalanche of articles continues. We are only reminded about the murder cyclically, usually to mark the anniversary of the crime. Naturally, the Grossian narrative perseveres and dominates. It is indispensable, especially in the West.

The voices on Jedwabne can be divided into journalistic and academic, but, generally, it is rather hard to find any difference between them. Their authors tend to emote profusely and breathe the fire of opprobrium toward anyone who fails to concur with the Grossian hypothesis. Such dastardly deviations are normally ascribed to anti-Semitism or Polish nationalism. Received opinion about such dissidents is inclined to suspect Holocaust revisionism.

Since we discussed the issue in our earlier work on Jedwabne, here – to illustrate the continuation of this curiously monolithic discourse – we shall invoke only one example of typical punditry, from the Spring of 2021. Leftist journalist Masha Gessen contributed a standard opinion on Jedwabne for The New Yorker: “Gross’s book ‘Neighbors’ documents the murder of sixteen hundred Jews by their Polish neighbors: the killing of one half of a village by the other.”[1]

This is a precise regurgitation of Gross’s narrative, including the false claim of “documented” crime, which was not the case. According to his original hypothesis, “Polish neighbors” murdered “1,600” Jews; practically no one survived. The pamphlet Neighbors was no more than accusatory punditry, informed by post-modernist theory; it was lightyears away from being the work of scholarship grounded in logocentric and empirical methodology that it masquerades as. The strategic aim in this kind of warfare is to administer a “shock therapy,” in this case to bowdlerize the conscience and subconsciousness of contemporary Poles in order to facilitate the implementation of “social justice” in Poland.”[2]

Gross stands by his hypothesis that the role of the Germans was limited to watching, while the Polish population murdered most of the Jews. He further believes that “Polish municipal authorities” masterminded the event.

Except for 100–150 who managed to escape, the town’s entire Jewish population was murdered. … by their Polish neighbors. Although a small detachment of German gendarmes and a mobile SS or Gestapo unit encouraged the killings, the actual murder was carried out by local inhabitants, with the town’s mayor and other Polish municipal authorities coordinating the slaughter. The precise number of victims is difficult to establish. Witnesses at a 1949 trial of 22 perpetrators spoke of 1,500 murdered. An investigation carried out in 2000–2002 by the Polish Institute of National Memory concluded that ‘at least 340’ people were killed.[3]

It is notable that Gross has awkwardly backtracked regarding the statistics of “1,600” victims. He currently maintains that several hundred died. He has even admitted that “100-150” persons successfully fled. This suggests not only a lower victim count but also some form of participation by the Polish population in saving the unfortunates, as demonstrated earlier by Richard Tyndorf and Martin Dean. Official Jewish records currently mention 600 victims in Jedwabne, but some of that number perished elsewhere after the massacre. Despite all of this, Gross continues to insist that the role of the Germans was limited to watching, while the Polish population murdered most of the town’s Jews. He avows that “Polish municipal authorities” planned and organized the killing.[4] Nor has he ever formally acknowledged and revised his original statistical error, despite now ample scholarship attesting that his figure was at least four times too high.[5]

Many scholars replicate Gross’s narrative, including his reluctance to acknowledge a death count much lower than “1,600.” Among them are Wendy Lower, Joanna Michlic, and Antony Polonsky. Recently, however, without disclosing his new sources, Polonsky has arbitrarily reduced the number of Jewish victims to 1,000. David Cesarini, likewise sans explanation or documentation, cut the number in half: to 800 persons.

Naturally, the Grossian paradigm of Polish “neighbors” murdering Jewish “neighbors” became ubiquitous. It is repeated automatically. Witness, for example, Andrew Kornbluth and Sabine Rutar.[6]  The latter insists that “Jedwabne was where non-Jewish Poles, with a certain amount of incitement but no actual participation by the Germans, brutally massacred their Jewish neighbours.” Rutar, on top of that, rather condescendingly sneers that whoever does not agree with her verdict must suffer from “cognitive dissonance,” which she views as a point of intellectual demarcation between “East” and “West.” By this way of thinking, Western scholars are sophisticated, for they accept Gross’s conclusion without any research; historians from the East are retrograde because they insist that research is the groundwork of conclusion.[7]

It is telling that Western scholars customarily invoke the Institute of National Remembrance (IPN) as the authoritative source for their unequivocal conviction that “Polish neighbors” perpetrated the crime of Jedwabne. Meanwhile, an editor of the preliminary monograph about the mass murder stresses that the role of the Germans has not yet been sufficiently explained. We know they were there. But we do not know either what they did or how they instigated the local inhabitants, or even whether they interfered with anything at all. That is not exactly dotting the “i” and crossing the “t” on Jedwabne. This means that even the most distinguished scholarly voices, treating the narrative of Gross with sympathy, can be expected to leave the question of German participation unaddressed. Because of such egregious failings, it is tempting to summarily dismiss as punditry the pronouncements of Western scholars who have failed to sully their hands with any of the micro-scale research that could once and for all lay the controversy of Jedwabne to rest.[8]

[1] Marek Jan Chodakiewicz, The Massacre in Jedwabne, July 10, 1941: Before, During, and After (New York and Boulder, CO: Columbia University Press and East European Monographs, 2005).

[2]     Masha Gessen, “The Historians Under Attack for Exploring Poland’s Role in the Holocaust,” The New Yorker, 26 marca 2021, https://www.newyorker.com/news/our-columnists/the-historians-under-attack-for-exploring-polands-role-in-the-holocaust.

[5] Currently, Gross asserts that the number of victims was between 1,500 and “at least 340.” The former figure stems from the Jedwabne trial records of 1949. The latter number reflects estimates by the IPN in 2002.  See Jan Tomasz Gross, s.v. “Jedwabne,” The YIVO Encyclopedia of Jews in Eastern Europe, ed. Gershon David Hundert (New Haven, CT: and London: Yale University Press, 2008), vol. 1: 821. Richard Tyndorf retraced the mechanisms of survival of a large group of Jews in and out of Jedwabne during the massacre, as well as their presence in the Łomża ghetto in July 1941. Martin Dean has confirmed the Jewish influx to Łomża, and he estimates, amazingly, that there were 1,000 refugees from Jedwabne. More likely, that many could have fled to Łomża from the entire region, and not only from Jedwabne. See Ryszard Tyndorf, “Ocaleni: Żydzi po masakrze w Jedwabnem,” Glaukopis, no. 1 (2003): 277–283; Ryszard Tyndorf, “Ocaleni: Żydzi po masakrze w Jedwabnem—uzupełnienie,” Glaukopis, no. 5–6 (2006): 238–241; Martin Dean (ed.), Encyclopedia of Camps and Ghettos, 1933–1945 (Bloomington and Indianapolis, IN: Indiana University Press, in association with the United States Memorial Museum, 2012), vol. II, Part A, 900, 918–19, 957. Dean’s discovery that a number of Jedwabne Jews found themselves in the Łomża ghetto is confirmed in “Lomza,” Encyclopaedia of Jewish Communities Poland, vol. 4: (Warsaw and Its Region), http://hashkedim.com/lomza>, which is a translation of Abraham Wein (ed.), Pinkas hakehillot Polin (Jerusalem: Yad Vashem, 1989), 249–62. According to an official Jewish death estimate, there were 600 victims, but it is an estimate assuming that each family had approximately three children. See the estimates in the Hebrew part of the Jedwabne memorial book at www.jewishgen.org/yizkor/jedwabne/yed075.html. Bikont also put together a list of the Jewish inhabitants of Jedwabne, but it is hard to judge how solid it is. For example, the journalist failed to include Jews who were drafted into the Red Army in 1940 and 1941. As for individuals, for example, Bikont claims that Jedwabne’s Zysa (Cwinka) Cukierbaumówna aka Zofia Rodak, the daughter of Mosze Cukierbaum, who attended high school in Łomża, “managed to join her family in Palestine.” However, Josif Chojnower aka Józef Chojnowski aka Konstanty Staniszewski testified that „Cukierbraumówna [sic Cukierbaumówna], the daughter of the pharmacist of Jedwabna [sic],” who was a fiance of Chojnower’s son in Łomża, left with the whole family to Warsaw, where they all survived passing as Christians. Chojnower was initially reluctant to include her: “I said not to take Cukierbaumówna because we could all die since she looks Jewish.” Nota bene, the whole family found shelter with various Christians, including Professor Władysław Studnicki. See Anna Bikont, My z Jedwabnego (Wołowiec: Wydawnictwo Czarne, 2012), 374; Josf [Josif] Chojnower vel Konstanty Staniszewski, AZIH 301/4866.

[6]     According to the official Soviet population tally of 1940, there were fewer than 600 Jewish inhabitants of Jedwabne. However, Gross wrongly assumed that there were many out-of-town refugee Jews there who had escaped from the German occupation elsewhere. Why is this assumption wrong? First, before June 1941, the Soviets prevented refugees from settling in the border area. They were forced to move at least 100 kilometers east of the Nazi-Soviet frontier. For example, Harold Zissman (Hersz Cukierman) of Ostrołęka recalls that in the Fall of 1939 he fled to Jedwabne with his family. In June 1940 the Soviets resettled them forcibly in Dereczyn, in accordance with a decree. See Harold Zissman, The Warriors: My Life As a Jewish Soviet Partisan (Syracuse, NY: Syracuse University Press, 2005), 27–31. Further, the Soviets treated all refugees from the German zone as potential spies. They were at pains to resettle them elsewhere – often to the Gulag, which Gross himself admitted in his earlier monograph on the Soviet occupation. Moreover, in June 1941 Jedwabne was so close to the front line that the Germans captured it immediately, and there was no time for any refugees to arrive there before the Wehrmacht: Everyone was too surprised by the lightning speed of the Nazi advance. Lastly, it is doubtful that the Jewish fugitives from various local extermination actions sought shelter in a small town like Jedwabne. As a rule, they fled to large cities (Łomża, Białystok) in the expectation, false as it turned out, that they would be safer there. Marcin Urynowicz mimics the conceptual mistake of Gross. See Jan T. Gross, Revolution from Abroad: The Soviet Conquest of Poland’s Western Ukraine and Western Belorussia (Princeton, NJ: Princeton University Press, 1990), 187-224; Marcin Urynowicz, “Ludność żydowska w Jedwabnem: Zmiany demograficzne od końca XIX wieku do 1941 na tle regionu łomżyńskiego,” Wokół Jedwabnego: Studia, Dokumenty, ed. Paweł Machcewicz i Krzysztof Persak (Warszawa: Instytut Pamięci Narodowej–Komisja Ścigania Zbrodni przeciwko Narodowi Polskiemu, 2002), vol. 1: 100.

The book can be purchased:

The book is in Polish. The 75 page introduction is in English.