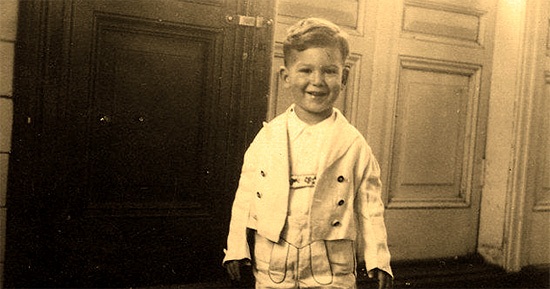 If possible, the United States likes to keep quiet about this shameful story. In June 1939, the “St. Louis” ship approached the port of Miami, with 937 Jewish refugees from Europe on board. When the ship was near Miami, the US Coast Guard told the ship’s captain that “St. Louis” – as an “undesirable element” – could not be moored in Miami or in any other US port. After many days of unsuccessful negotiations, the captain had to make the decision to return to Europe. Two-year-old Joachim Hirsch was also aboard the ship. Soon after, he was gassed in Auschwitz.

Joachim Hirsch was born on May 13, 1937 in Wroclaw, at the time a German city. He was murdered (gassed) by the Germans in the Auschwitz concentration camp on October 6, 1944. At the time of his death he was 7 years old. Little Joachim did not have to die. In 1939, together with his family, he found himself in a group of 937 Jews, who were allowed to escape the increasingly anti-Semitic Third Reich for a considerable fee.

This group of Jews was on board the “St. Louis” ship, which on May 13, 1939 set off from the port of Hamburg on a cruise to Cuban Havana. There, the Jews were to find shelter from German persecution.

The cruise to America ran smoothly. After two weeks, the ship reached the Cuban port. There, however, it turned out that only 22 Jews could disembark due to problems with corrupt officials and an obscure law regarding immigrants. The rest remained on board the ship. After several days of negotiations, a decision was made to go to the port of Miami in the United States, located only a few hundred kilometers away.

When “St. Louis” approached the shores of Florida, it was detained by the US border guards. The captain of St. Louis was then given a clear message: “The ship will not be allowed to be moored here [Miami], nor in any other port of the United States.” The decision to refuse to accept slightly over 900 Jews running away from Germany was made by the then US president – Franklin Delano Roosevelt. He considered them to be an “undesirable element”. The fear that the Jews would become a burden on America’s budget turned out to be the key …

The last attempt to save the Jews was made in Canada. It was also unsuccessful and also due to the inability to find those willing to take care of the Jews. Since they were running short on food and fresh water supply, the captain decided to return to the port of Hamburg, Germany.

In the end, the Jewish organization Joint managed to negotiate with the governments of the United Kingdom. Britain, France, Belgium and the Netherlands, that the Jews on board the St. Louis would find shelter in those countries. Only those who came to the UK survived the war. Several hundred passengers who came to France, Belgium and the Netherlands ( Joachim Hirsch with his family among them) shared the tragic fate of other European Jews. Only a few of them survived the war.