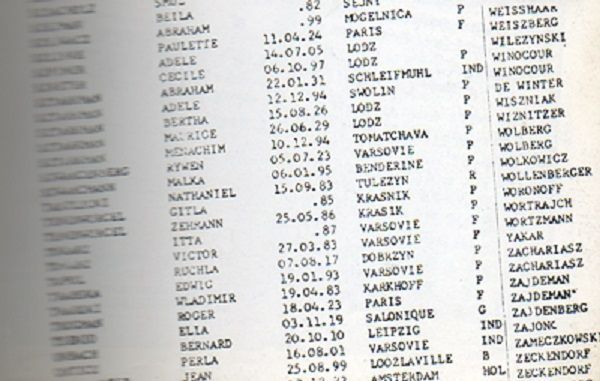 The Velodrome D’Hiver (or “Vel D’Hiv”) roundup was the largest French deportation of Jews during the Holocaust. It took place in Paris on July 16-17, 1942.

When the Germans made the decision to arrest, deport to the East and murder Jews in 1942, a German-French agreement was signed, known in the English-language historical literature as the “Bousquet-Knochen agreement”.

The agreement provided for the capture and removal of 22,000 stateless Jews living in France.

So enthusiastic about the “project” was Pierre Laval, the head of the French government in Phillippe Petain’s Vichy Regime that when he was to approve this agreement, he added the words “and also children” on the document, in his own hand, because he noticed that the agreement provided for the removal of only those 16 to 45 year old. Historians also mention that Laval prevented Jewish children from obtaining American visas, which were arranged for them by the American Friends Service Committee. The Germans did not at the time sought to include children in the capture, but Laval – uninvited, on his own initiative – enabled them to deport 4051 children to the gas chambers in Auschwitz in July 1942 alone.

Beginning in the early hours of July 16, French police rounded up thousands of men, women and children throughout Paris. By the end of the day, the police had taken 2,573 women, and 3,625 children from their homes. The roundup continued the following day.

Approximately 6,000 were transported to Drancy, in the northern suburbs of Paris. The rest of the arrestees were detained at the Velodrome d’Hiver (Winter Cycling Track), and indoor sporting arena.

Following the roundup of Jew in greater Paris, some 7,000 Jews, among them almost 4,000 children were crowded together in the sports arena.

After five days, Jews incarcerated at the Vel D’hiv were transferred to other transit camps outside Paris, where they were kept guarded by the French police until being transported to concentration camps and killing centers in the east. At the end of July, the remaining adults were separated from their children and deported to Auschwitz. At some point, over 3,000 children remained interned without their parent until they were deported, with adult stranger, to Auschwitz as well.

German authorities continued the deportations of Jews from French soil until August 1944. In all, some 77,000 Jews living on French territory perished in concentration camps and killing centers- the overwhelming majority of them at Auschwitz.

Warsaw ’44 –A City That Remembers