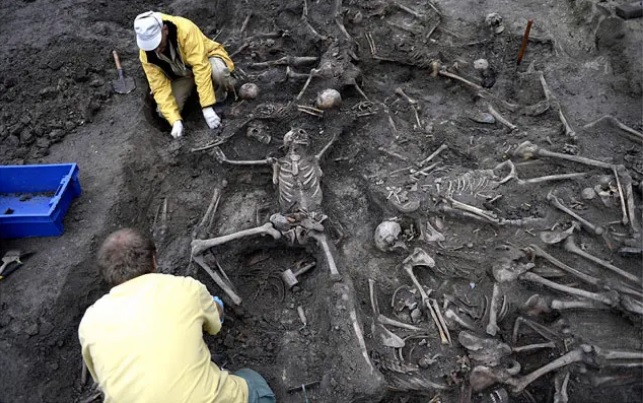 On April 5, 1940, the Soviets began the extermination of Polish officers from the POW camp in Starobielsk. The genocide of prisoners was prepared perfectly. The administration of the camp in Starobielsk spread rumors that everyone would be released and would even be able to go to France. The first group of 195 people were removed from the camp on April 5, the last on May 12. The Soviets murdered 3809 people.

The prisoners were transported by train and then by buses to NKVD prison in Kharkov. On arrival their military belts and coats were taken off, their hands were tied back and they were brought to the basement where they were shot in the head. Executions took place at nights. The bodies were thrown into two trucks with the inscription “bakery” and taken to the suburban forest of Piatichatki, where they were thrown into previously dug pits.

In 1991, the first exhumation was carried out in Piatichatki, the second took place in 1994 and the third took place in 1995. Polish archaeologists made over eight thousand boreholes and found all graves. In most of the graves the corpses were arranged in layers from 5 to 12. In some graves, the bodies were thrown into the pits randomly, without any order. This was the case with the largest grave, where about 1050 bodies were found. About 160 corpses were recovered from the smallest grave.

“Auschwitz was nothing”, when compared to what was going on in the Security Police (UB) torture chambers.