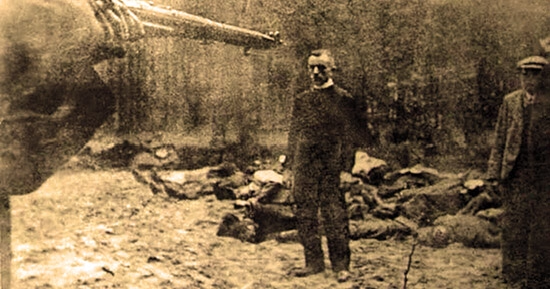 During the occupation of Polish territories by the Germans and the Russians, both occupants highly
emphasized the importance of the extermination of Polish elites. Their goal was to liquidate the intelligentsia and all those who could act as leaders if/when the time of a rebirth of the nation would
come. Two examples of such actions were German “Operation AB” or the Soviet Katyn massacre. In no
other European country, was the elimination of elites as systematically and meticulously implemented as
it was in Poland.

The research of the Institute of National Remembrance (IPN) shows that in the years 1939-1945,
between 5.6 and 5.8 million Polish citizens were killed. Taking into account the fact that before
September 1939, the Second Polish Republic had 35 million citizens, it can be calculated that as a result
of the war and the occupation losses reached 16-17 percent of the population. For comparison – losses
in the population in other countries occupied during World War II were much smaller. The population of
the Netherlands decreased by 2.2 percent, France – by 1.5 percent, and Belgium – by only 0.7 percent.

In the case of Poland, both Hitler and Stalin had a clear goal to exterminate the elite in order to eliminate
the threat they posed to the new occupation authorities with their intelligence, experience and authority.
Hitler stated in 1939:

A year later, he was joined by Martin Bormann of the SS, who in his notes from November 2, 1940,
wrote:

“The General Government is our reservoir of workforce for simple works (brickyards, road construction,
etc., etc.) (…) It must be clearly spelled out that there can not be any “Polish masters”. Wherever there
might be Polish gentlemen, they are to be, as harsh as it might sound, killed (…) The Führer wants to
emphasize once again that for Poles there can be only one master and he is a German, two masters can
not be next to each other. That’s not allowed. That’s why all the representatives of the Polish
intelligentsia are to be killed. It sounds harsh, but that’s the law of life. ”

As a result, both occupants tried their best to eliminate the intelligentsia and any who so much as
exhibited leadership traits endowed with a leadership trait – both at the national level and locally. As a
result of intentional extermination actions such as “Intelligenzaktion”, “Action AB” or the Katyn massacre,
Poland lost 39 percent of its doctors, 33 percent of its teachers, 30 percent of scientists and university
lecturers, 28 percent of priests and 26 percent of lawyers.

Who replaced them after the War? Who created the new elite that would rule the Socialist Republic of
Poland? Those murdered in Katyn were replaced with thousands of Soviet officers and members of the
Communist Party of the Soviet Union. This was one of the reasons why Poland after the Second World
War was not able to decide its own fate. The “elites” imported from the east and their Polish communist
puppets made all of the decisions.

The original article in Polish:  http://niewygodne.info.pl/artykul9/04571-Eksterminacja-polskich-elit-podczas-II-WS.htm?fbclid=IwAR1GemmHBl6bpgCdHlBlZDA9Y_hGvPyT3srSH0kK6cX875yHJWHqlBw-QLk

I Survived The Warsaw Uprising [Video]