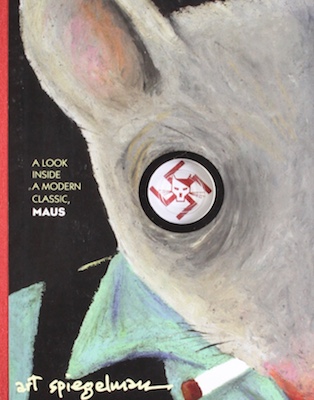 Art Spiegelman makes no effort to correct the falsifications of history in MAUS in this METAMAUS volume. Instead, Spiegelman advances the following rather shallow exculpations (CAPS):

BUT MAUS IS „ONLY” SEMI-FICTION AND BIOGRAPHY

Malicious fiction is still malicious. Think of the infamous PROTOCOLS.

People tend to form their opinions according to what they read, regardless of its genre. MAUS promotes prejudices against Poles. The falsifications in MAUS make it unacceptable in the classroom–especially in view of the impressionable children and teenagers, and even low-information adults.

Merely the fact that MAUS is „about the Jews” does not entitle Spiegelman to so grossly falsify the history of other peoples (Poles in this case), especially in view of the low-information of most of his readers.

In his MAUS, Spiegelman shows Poles hanging a surviving Jew for coming to reclaim his property. The reader is misled to believe that this was something normative. It was not. The reader is not told that this happened to a small fraction of 1% of Jewish returnees, that Poles were in crushing poverty and in a desperate housing shortage situation, during and immediately after WWII. Nor is the reader told that a civil war was going on in Poland. During this time, in which several hundred Jews were
being killed by Poles out of various motives, Jews collaborating with the Soviets were murdering tens of thousands of Poles. Why isn’t that in MAUS?

Art Spiegelman would have us believe that the portrayal of Poles as pigs is innocuous, because, after all, Germans are cats and Jews are mice. Note quite. The pig has an intense and emotional abominable connotation, in Jewish thinking and history, in a way that other non-kosher animals, such as the cat and mouse, and even the horse and camel, do not. Please see: The Essential Talmud. [In fact, according to the Talmud (BABA KAMA 82b), a Jew is cursed merely for breeding pigs!]

Now go beyond Jewish religion. Consider everyday life. As everyone with the most elementary knowledge of English knows, „You pig!” is incomparably more pejorative than „You cat” or „You mouse!” Don’t believe me? Ask any child.

SPIEGELMAN IS MERELY COPYING NAZI MOTIFS FOR HIS COMIC

In actuality, the Nazis had no singular, fixed image for any particular group that they despised. By Spiegelman’s own admission (p. 115), the Nazis also depicted Jews as poison mushrooms, as in the infamous DER GIFTPILZ. The Nazis seldom, if ever, portrayed themselves as cats. (Did they EVER?)

POLES SUFFERED TOO, BUT THIS HAS NO SIGNIFICANCE

By Spiegelman’s own admission (p. 121, 124, 129), Poles suffered greatly under the Nazis. However, he also acknowledges that he made his choice of Poles-as-pigs in order to put the Poles „outside the food chain” relative to the Nazis. (p. 129). The Poles, in Spiegelman’s own words, were „witnesses”.
(p. 129) (a variant of the more commonly used Holocaustspeak term, „bystanders”.) In fact, there was no clear-cut dichotomy between how Nazis reckoned Jews and Nazis reckoned Poles. Spiegelman and his MAUS are functionally in denial about the magnitude of Polish suffering under the Germans!

Art Spiegelman rationalizes the imagery of mice (Jews) and Poles (pigs) on the „fact” that Jews were subject to extermination, while Poles were to be exploited and „worked to death”, but not exterminated. (pp. 121-122). This, too, is contrived. Death is death, whether you are an animal slaughtered for food, or you are an animal killed for eating the farmer’s grain. Besides, whether you are a mouse on the farm, or whether you are a pig on the farm, you have no inherent right to live, and you remain alive only as long as the farmer chooses to let you live, or has not yet gotten around to
killing you.

The experiences of the Poles and Jews, though different, overlapped considerably. The Nazis had utilitarian as well as exterminatory attitudes towards the Jews. Thus, large numbers of Jews were forced laborers in the camps and ghettos, being slowly worked to death in a utilitarian manner. The Jews had no monopoly as victims of genocide. The Germans exterminated the bulk of Poland’s intelligentsia, and Poles in general were to be largely exterminated had the Germans won the war. (See first comment).

THE CHARACTERS IN MAUS ARE COMPLEX ONES

Now consider Spiegelman’s own assessment of how readers tend to perceive the main characters of the MAUS comics. He comments, „Even in the way they’re drawn, the cats have the most human of the faces. The mice have the most abstracted and the least physiologically human representation: the nose is at the bottom, the eyes are at the midway point, and there’s no room for that mouth. The pigs have those unsightly snouts.” (p. 128). Clearly, by Spiegelman’s own tacit admission, the Germans
come out more favorably than the Poles, even though the Germans are the ones that had murdered 5-6 million Jews. This smells of the historical revisionism (e. g., the falsehood about „Polish death camps”) that shifts the blame for the Holocaust away from the Germans–where it belongs–and onto the Poles.

„POLES ARE THE PROBLEM”

When all else fails, Spiegelman resorts to blame-the-victim tactics by accusing Poles of being the problem–about there being „something deeply problematic about the Polish ability to assimilate the past.” (p. 124). What if someone were to turn this around by suggesting that there is „something
deeply problematic” about the arrogance in quite a bit of Jewish thinking and conduct–as exhibited by Spiegelman?

SPIEGELMAN AS A HEROIC ICONOCLAST

Art Spiegelman thinks himself a hero. He takes delight in offending Poles, fancying himself some kind of hero for being an iconoclast and breaker of taboos (p. 124). To validate the fact that he is a hero, Spiegelman should instead attack a group that, unlike the Poles, has the political power to bite
back effectively. That would be interesting.

SPIEGELMAN FINALLY ADMITS THE OBVIOUS: HE IS ANIMATED BY POLONOPHOBIA

Finally, Spiegelman divulges his ACTUAL reasons for calling Poles pigs. It is bashing Poles, pure and simple. With reference to his father’s attitude towards Poles, he quips, „So my metaphor [mice to be killed outright, and pigs to be exploited and eaten] was somehow able to hold that particular vantage point while still somehow acknowledging my father’s dubious opinion of Poles as a group.’” (p. 122). This is bigoted, collectivist thinking, like saying that it is all right to portray Jews as crooks just because some Jews are crooks.

Evidently, bigotry is always wrong–unless, of course, the targets of the bigotry are Christians or Poles.

Polonophobe Art Spiegelman adds that, „And considering the bad relations between Poles and Jews for the last hundred years in Poland, it seemed right to use a non-Kosher animal.’” (p. 125).
Spiegelman is completely one-sided, with the usual selective memory about past Polish antiSemitism. He is predictably silent about the privileges Jews also had in Poland, as well as the Jewish share of wrongs in the poisoning of Polish-Jewish relations.

TURNING THE TABLES: A COUNTER-MAUS CARTOON (I CALL MUNGO, THE GERMAN WORD FOR MONGOOSE)

Let us see how Art Spiegelman and his fans, would like my proposed Counter-MAUS cartoon below. How well would it „fly” in the American classroom and in Holocaust education?

I do not believe in censorship. MAUS should not be removed from the classroom. Instead, my proposed Counter-MAUS cartoon, MUNGO (the German word for mongoose), should be given equal time in the classroom whenever MAUS is used.

It is only right.

The title image: „MetaMaus: A Look Inside a Modern Classic, Maus” by Art Spiegelman – part of the cover. / Selected by wg.pco