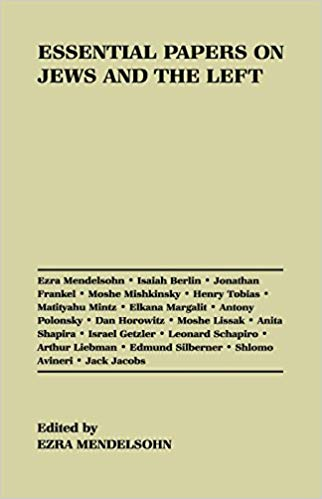 This book centers on personages and political movements. It features the philosophy of Moses Hess and Ber Borokhov, the anti-Semitism of the Jew Karl Marx, etc. It concludes with the anti-Zionist politics of the Soviet Union in the last few decades of its existence.

The authors touch on many political issues in Russia and Russian-ruled Poland. For instance, Moshe Mishkinsky describes the Jewish national idea as a third way for Lithuanian Jews (as an alternative to identification with either Poland or Russia in the January 1863 Polish Insurrection). (p. 95). In addition, Mishkinsky echoes Endek sentiments about the Lithuanian Jews (Litvaks, or Litwaks) as a center of revolutionary thinking. (pp. 79-82).

There is a chapter on the Hashomer Hatzair, authored by Elkana Margalit. Its members, the Shomrim, included assimilated Polish Jews, even those who considered themselves Poles of the Mosaic faith. (p. 147). By the 1930’s, according to Margalit, the members of Hashomer Hatzair described themselves as independent Marxist revolutionaries. (p. 163). [This seems to support the Endek contention that not only unassimilated but also many assimilated Polish Jews, including even self-professing Poles of the Mosaic faith, do not necessarily identify with the Polish cause.]

POLAND: A SINGLE NATION, OR A BALKANIZED “NATION”?

Even though he does not use any of the following terms, Antony Polonsky tacitly agrees with those who suggest that the politics of Yitzhak Gruenbaum was polarizing in nature. Gruenbaum favored an intense Jewish separatism that derived from the Minorities Treaty, and effectively attempted to balkanize Poland through the eventual National Minorities Bloc in 1922. [This contributed to the Narutowicz assassination.] Polonsky writes, (quote) The Jews, in his view, would only find a reasonable place for themselves when Poland had been transformed from a national state into a state of national minorities, in which the various ethnic groups enjoyed a wide measure of autonomy…During the 1920’s this strategy did not prove very effective: It was clear that it needlessly antagonized the Poles, and that the Jews’ objectives were quite different from those of the other minorities. (unquote). (p. 170).

On the other hand, the Pole-conciliatory politics of the main Orthodox political organization, Agudas Yisrael, did seem to bear fruit. For instance, one of its leaders, Eliasz Kirszbraun, was elected on the government (BBWR) list in 1928. (ibid, p. 171).

One shortcoming of this work is that it does not define the political terms it uses. However, whatever the valid differences between leftist Jewish non-Bolsheviks and Jewish Bolsheviks, they became largely irrelevant. Consider what happened during and after the Russian Revolution (1917), (quote) It was perhaps not surprising, in view of the very impulsiveness with which the Jewish socialist threw himself into bolshevism under the stress of revolutionary fervor, that his fate inside the movement should subsequently have proved so tragic…The tragedy of the left socialist revolutionaries was that in their enthusiasm they accepted Lenin’s demagogy at its face value–they believed in the promises of a revolutionary war, of land for the peasants and of democratic freedoms, because they wanted to believe in them. (unquote). (Leonard Schapiro, pp. 318-319).

ZYDOKOMUNA: SOME NUMBERS AND SOME MOTIVES

The authors in this work give some figures on the involvement of Jews in Russia’s revolutionary movements. However, at least one of them, Leonard Schapiro, recognizes that such figures are necessarily underestimates. He comments, (quote) But Jews abounded in the lower levels of the party machinery–especially, in the CHEKA, and its successors the GPU, the OGPU, and the NKVD. (In the issue of PRAVDA for 20 December 1937, there is a list of 407 officials in the NKVD, decorated on the occasion of the twentieth anniversary of the CHEKA. Forty-two of the names, or about 11 percent, are Jews, and the actual total of Jews may well have been higher, since many of them may be supposed to have adopted Russian names. How many of these Jews survived the purge of 1938 is another matter.) It is difficult to suggest a satisfactory reason for the prevalence of Jews in the CHEKA. It may be that having suffered at the hands of the former Russian authorities they wanted to seize the reins of real power in the new state for themselves. (unquote). (p. 318). [Of course, Communism, whether Jewish or non-Jewish, was always based on a lust for power.]

Nowadays, we often hear the rather silly excuse that widespread Jewish-Soviet collaboration, during WWII, occurred because the true character of Communism was unknown at the time to Poland’s Jews. In actuality, Communism, from the beginning, was based on undisguised terror. In addition, the totalitarian nature of Communism was most definitely known before WWII, and moreover was acknowledged as such even in leftist Jewish circles! Antony Polonsky quoted a 1938 article by Viktor Adler. It addressed what long before then had been common knowledge. Adler wrote (quote) “We must revise the old theory that communism and socialism, growing from the same root–and even the same branch, are divided only on matters of tactics and matters of struggle, [and that they] should unite in a joint stand in fighting for the society of tomorrow. So it was once: Now it is different. Even the ends have changed. If socialism has remained true to the concepts of a society of tomorrow, based on freedom, communism has gone further and further away from it, until it has reached the present Stalinist anti-libertarian totalitarianism.” (unquote). (p. 178).

Some Jews resent being considered internationalists, cosmopolitans, or otherwise unattached to their host nations. However, Jewish editor Ezra Mendelsohn seriously raises this consideration as one of reasons behind Jewish over-involvement in the political left. He asks, (quote) To what extent was the cosmopolitan, international character of socialism a factor in attracting Jews, who were (perhaps) by nature a cosmopolitan people lacking deep roots in their countries of residence? (unquote). (p. 15. See also Leonard Schapiro, p. 308).