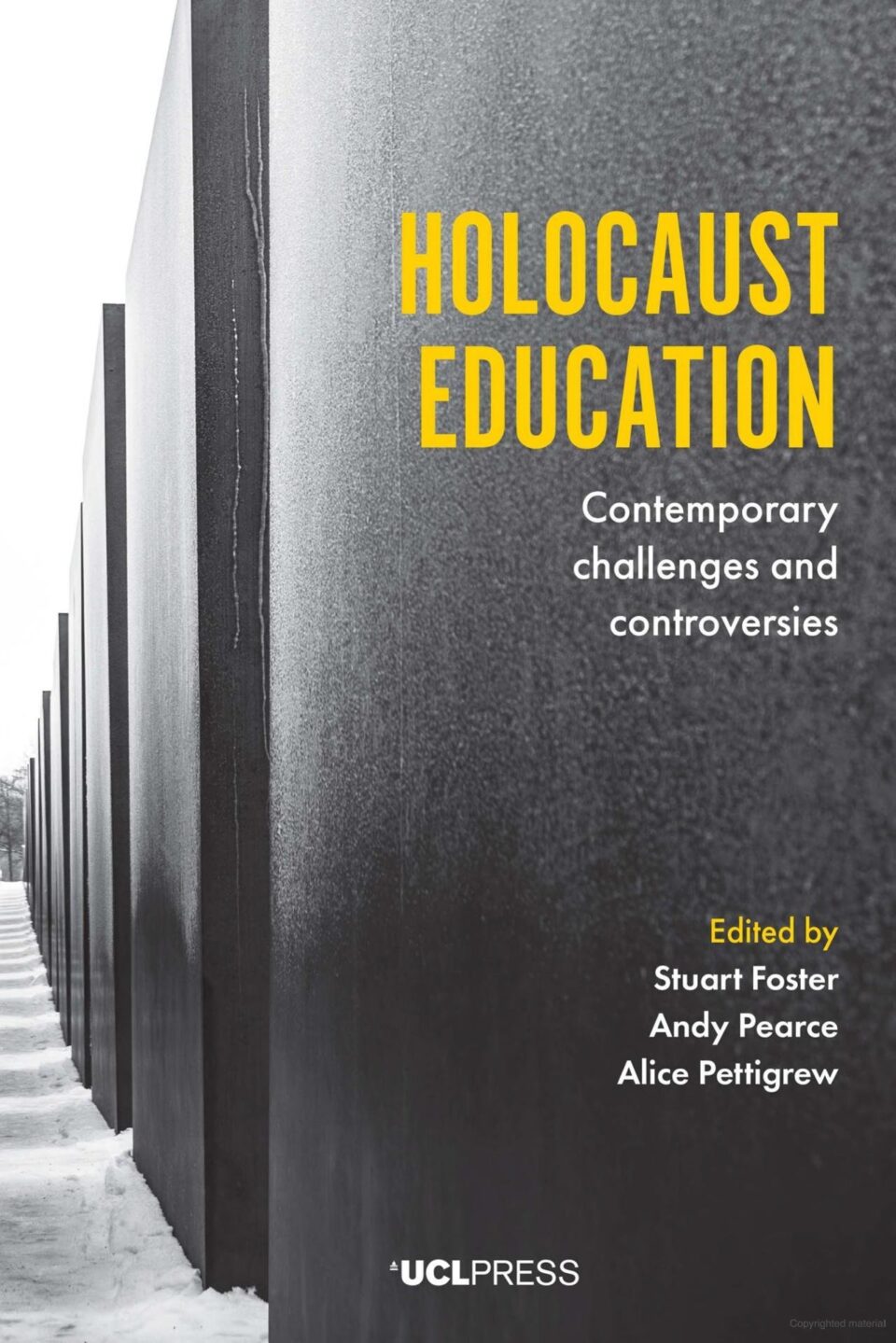 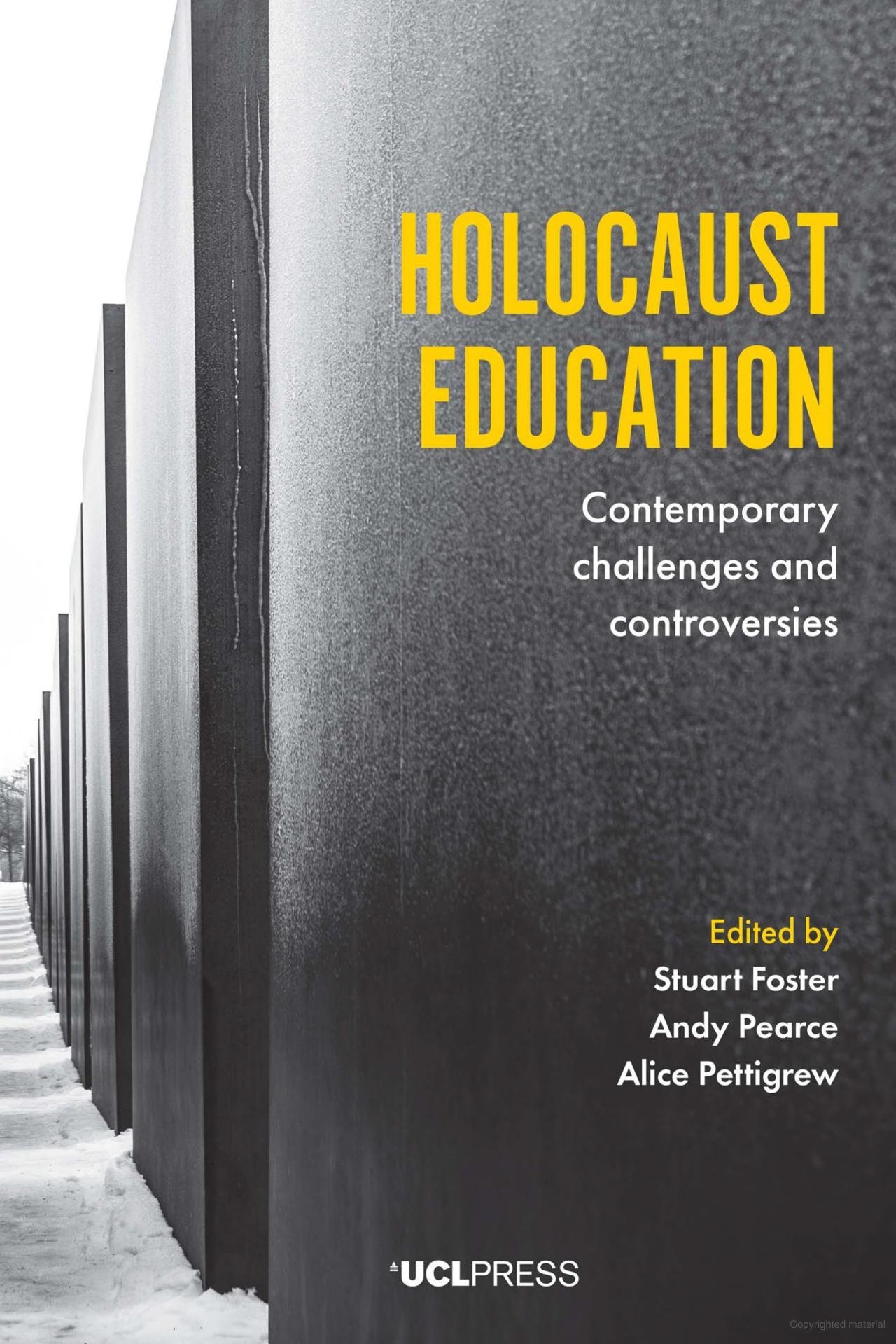 THE NEBULOUS CONNECTION BETWEEN ANTISEMITISM AND HOLOCAUST EDUCATION

Author Andy Pearce clearly states the issue, “The conviction, for instance, that more Holocaust education is the antidote to contemporary antisemitism becomes more an article of faith than a verifiable claim.” (p. 162).

Pearce inveighs against antisemitism as a catch-all explanation for the Holocaust, “If we follow Horn and state that the Holocaust didn’t happen because of antisemitism this is not to be mendacious, but to press against the monocausality embedded in that generalization and the residual laziness present in such seemingly self-evident explanations.” (p. 167).

Ironically, trying to fold all antisemitism into the Holocaust can distort both. Pearce asks, “How far is any contemporary understanding of antisemitism framed, impacted or ‘distorted’ by the experience and memory of the Holocaust?” (p. 153).

Finally, antisemitism is more an opinion than a fact. Pearce lands the knockout blow, “Who should be able to determine what constitutes ‘antisemitism’ and how?” (p. 153). Good question.

“ANTISEMITISM IS UNIQUE” IS ITSELF A RACIST CONSTRUCT

Pearce asks, “To what extent should antisemitism be conceived of as a unique and exceptional phenomenon, fundamentally distinct from other forms of racism, xenophobia or Islamophobia, for example?” (p. 153). Why would anyone even seriously ask such a question? Are Jews higher beings?

Some have called antisemitism the “world’s oldest hatred”. It must take magical historical genius to determine which prejudice (if any) is older than any other prejudice. Seriously now, it is a rhetorical device for elevating antisemitism above every other kind of prejudice, and to instrumentalize it for various political purposes, such as for forcing the teaching of the Holocaust.

“ANTISEMITISM IS CUMULATIVE”: ANOTHER RACIST CONSTRUCT

Pearce asks, “To what extent does ‘antisemitism’ denote a single, enduring phenomenon? Is it possible or instructive to trace a unitary, continuous ‘essence’ to antisemitism that stretches from antiquity, through the Nazi period to the present day? Or does the meaning of antisemitism fundamentally change in different places and at different times?” (pp. 152-153). The very fact that such a question is asked is itself instructive. No one, for instance, asks if there is a continuous “essence” to anti-Polonism that endures from century to century.

Only for Jews and the Holocaust is it ever insinuated that something said against the Jews in the 13th century (as by the Church) eventually caused, or at least contributed to, the Holocaust in the 20th century. No other people have this privilege. No one, for instance, suggests that something ugly said about Poland in the 13th century caused or contributed to Poland’s tragedies in the 20th century.

Most certainly antisemitism is not cumulative, any more than prejudices against non-Jews are cumulative. Pearce comments, “…as Eberhard Jäckel puts it, ‘there is no direct line from antisemitism to the Holocaust for the very simple reason that antisemitism had existed for centuries and yet had never before led to such murderous destruction’” (p. 163). Now we can finally put the blame for the Holocaust squarely where it belongs–upon Hitler’s Germany.

HOLOCAUST EDUCATION PRETEXTS: TEACHING OF THE HOLOCAUST INVOKED AS A MEANS OF “PROMOTING TOLERANCE”

Eleni Karayianni introduces the subject. She states that, “The civic and moral development of young people has been a large part of the justification for Holocaust education not only at primary but also the secondary level.” (p. 98). Sounds pretty lofty.

NO NEED FOR HOLOCAUST EDUCATION TO “PROMOTE TOLERANCE”

Eleni Karayianni comments, “Why the Holocaust specifically? Indeed, it is possible that the important civic and moral aims of anti-racist education, prejudice reduction, empathy, tolerance, and respect for others can be pursued by other means, other topics and subjects. As Heyl (in Mathis 2018) has argued, objectives such as tolerance and open-mindedness do not require discussion of the Holocaust.” (p. 108).

Karayianni adds that, “The data certainly indicate that teachers who do not teach about the Holocaust are effective at developing positive attitudes in their pupils anyway.” (p. 108).

Author Karayianni concludes that, “Alongside Short, the argument that I intend to make here is that lessons which present the Holocaust as a generalized paradigm of the evils of racism or prejudice and the virtues of respect for others do very little to promote real understanding of the actual processes of stereotyping and scapegoating.” (p. 105).

So much for the self-serving myth that Holocaust education is needed for “fighting prejudice” or for “promoting tolerance”. How often have we heard that line?

Ironically, the standard Holocaust-only or Holocaust-dominating approach in the classroom is itself a form of intolerance, as it discriminates against all non-Jewish genocides. So, if anything, it is the teaching of all genocides, on an equal footing with each other, that should be done in order to “fight prejudice” and “promote tolerance”.

Goebbels: Subtle Propaganda is Best. So Anti-Polish Messages in Holocaust Films are Low-Key

Why Ukrainians are angrier at Poles than they are at Russians; Machiavelli has an explanation