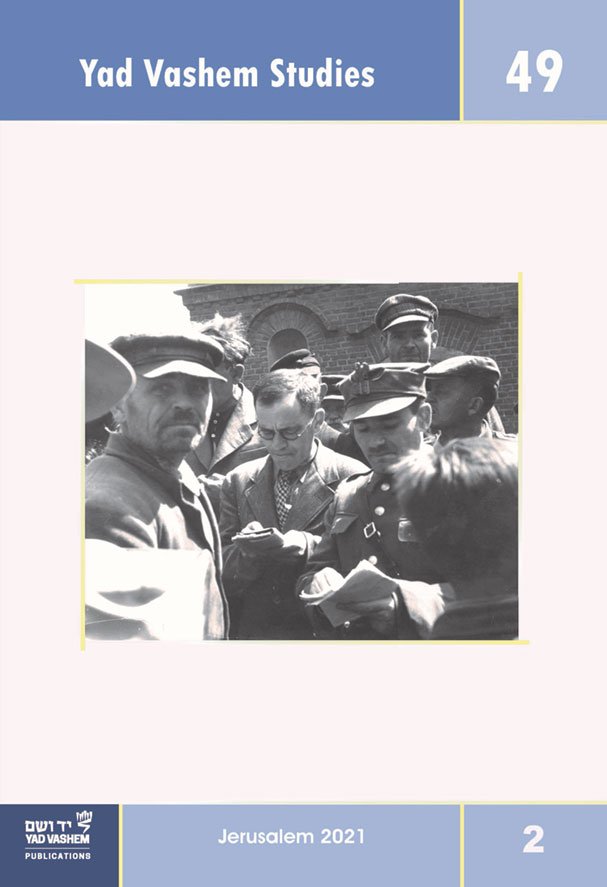 This paper exemplifies the blame-everything-on Poles narrative promoted by the Holocaust establishment. It even goes beyond that.

Let us begin with the tendentious subtleties throughout Stoll’s paper. There is a conspicuous Orwellian de-coupling of Nazis and Germans. She mentions “Germans” 140 times and “Nazis” 24 times. However, NOT ONCE does she use the phrase “Nazi German” in her 89-page paper, and only twice does she use the phrase “German Nazi” (Were there significant non-German and non-Austrian Nazis?) Better yet, her work is almost completely sanitized of any mention of Nazi German crimes against Poles. Only Jews matter. Oh, well, par for the course.

Not done yet, Katrin Stoll also repeats the old Holocaust supremacist myth of the Nazi Germans having “the ultimate goal of which was the murder of every single Jew in the world”. (p. 66). That is her worldview. And what if? Evidently, she thinks that the multitudes of “only” partial genocides just don’t measure up to the inferred total Jewish genocide–the Shoah. For rebuttal, see:

Throughout this paper, there is an undercurrent of blame directed at Poles for seeing the Jews as the “other”. Katrin Stoll has it completely backwards: It was Poland’s Jews that had long maintained an aggressive separatism, and had long generally insisted that they were not Poles. See:

DOUBLE STANDARDS ON RESCUERS OF JEWS

Stoll repeats Jan Grabowski’s phony indignation about paid Polish rescuers of Jews. Poles are accused of being greedy and (what else?) antisemitic for sometimes requiring such payment. Nothing is said about the brutal conditions, under the German occupation, that fully justified such payment. There is not even so much as a peep about the much-glorified Danish rescuers of Jews, who worked under much easier conditions than Polish rescuers, and yet took hefty payments from Jews for shipping them to Sweden. See:

The author engages in the pronounced cherry-picking of selectively-chosen anecdotes. She quotes the venerable Jan T. Gross, “The Blue Police (policja granatowa) was ‘an auxiliary formation staffed by Poles in German employ…’” (p. 22).  Revisionist baloney. The Blue Police was not in some kind of voluntary “German employ”: They were forced to participate!

Katrin Stoll repeatedly cites Tomasz Frydel. She conveniently avoids the fact that Frydel has soundly debunked the kind of Jan Grabowski Jew-killing accusations that she resurrects. For example, see:

Like Jan T. Gross and Jan Grabowski, Katrin Stoll, their protégé, twists Zygmunt Klukowski’s diary. She writes, “Justyna Kowalska-Leder points to this phenomenon in the context of ‘the form of Polish involvement in the Holocaust’, which was described by the doctor and director of the hospital in Szczebrzeszyn, Zygmunt Klukowski, in his diary.” (p. 22). Fact is, Klukowski said no such thing! See:

Stoll (p. 1) cites Calel Perechodnik (without mentioning the fact that he was a Jewish Nazi collaborator) on the Poles’ realization of Nazi German exterminatory plans against the Jews before the Jews did. However, other than pointing to ingrained Jewish Germanophilia, what is this supposed to prove? She also conveniently ignores Perechodnik on Jewish self-superiority being one of the root causes of what today is called the Holocaust. See:

WHOSE PHANTASMS ABOUT “THE OTHER”?

Elsewhere, Katrin Stoll waxes lyrical about the Poles not acting against real Jews, but only thinking and acting against their own created phantasm of the Jew. (p. 26). From Perechodnik’s own statement, ignored by Stoll, it is evident that Jewish self-superiority was not quite such a phantasm after all. In addition, Jews had their own phantasm of the stupid, brutish goy, but of course there is deafening silence about it.

DO POLES REALLY DRINK ANTISEMITISM WITH THEIR MOTHER’S MILK?

The author recycles Jan T. Gross and his selective quotation of Jan T. Karski–about a presumed narrow footbridge between Germans and Poles in terms of Nazi policies against Jews. She conveniently ignores contrary eyewitness testimonies. Johannes Blaskowitz, for instance, in describing the situation before the Holocaust itself, points out that the Nazi German policies against the Jews were creating a “deep disgust”, even among anti-Semitic Poles. See:

So much for Stoll’s own phantasm of “Polish antisemitism” (and, better yet, an “antisemitic consensus”: p. 28, 38, etc.) causing Poles to eagerly participate in the German-sponsored and German-directed murders of Jews.

But wait: It gets even better. Stoll actually writes, “There was an antisemitic and racist consensus among the Blue Policemen and the German police officer.” (p. 53). Wow! Once again, Poles and Germans find themselves on the same side. Sweeping generalizations are working overtime, and Stoll is the one that is creating a phantasm–of the Poles. Note that her Orwellian phrase, “anti-Semitic consensus”, is part of the title of her article.

Two can play this game. What if someone were to apply Stoll’s thinking, about Poles, and say that there is an “antigoyism consensus” among Jews? And what if this antigoyism consensus is what animated many Jews to become Communists, under the reasoning that killing a goy is, after all, no big deal?

Not surprisingly, Stoll is a staunch Zydokomuna denialist. She conveniently dismisses the Zydokomuna as a phantasm. (p. 64). That’s pretty creative. If something does not fit the standard Judeocentric narrative, it must not exist. Apparently, those Poles that had been tortured and murdered by Jewish Communists had been victims of a phantasm. Or maybe they had been victims of a bogeyman.

RUNNING DOWN THE CATHOLIC CHURCH

No modern Holocaust work would be complete without some kind of attack on Christianity, and Stoll does not disappoint. In fact, she goes further. She writes, “A priest in Brzeziny commented on the lack of a baptismal entry for Maria Blumental’s with the following words: ‘She was turned in’. This comment proves that the priests know very well what it was like and what role faithful Christians played in the crime against the Jews, including those who belonged, and whose descendants still belong, to their parish.” (p. 36). Evidently, in Stoll’s imagination, not only is the whole church collectively guilty for a Jew getting killed, moreover regardless of circumstances, but all subsequent parishioners are collectively and eternally guilty of the same. That’s some pretty wacky Judaized thinking!

LO AND BEHOLD: THE GERMAN DEATH PENALTY WAS NOT THERE

Stoll copies Jan T. Gross and his silly statements that attempt to vaporize the German death penalty. She writes, “The death penalty does not explain the scale of unforced denunciations or spontaneous expulsion of Jews from successive hiding places. In other words, it does not provide grounds for understanding the lack of salutary, life-giving indifference to the fate of the Jews.” (p. 71). So, unless there was a German standing there, pointing his gun at the Pole, the Pole was free to do whatever he wanted to do. Stoll must be a mind-reader! Her Judeocentrism puts her completely out of touch with reality.

“POLISH COMPLICITY IN THE HOLOCAUST”: THE BLUE POLICE

In Stoll’s narrative (e. g, pp. 78-on), the Blue Police (sometimes) acted alone in killing Jews. Once again, in Stoll’s fertile imagination, unless the German was physically there, and pointing his gun at the Pole, the Pole was free to act. Now back to reality. The brutal German rule over the Poles, the nature of the German-Polish master-slave relationship, the remote German supervision of the Pole, and the compelled Polish service in the Blue Police (Policja Granatowa)–all these have magically vanished into an Orwellian memory hole. Presto! In Stoll’s little world, the Polish Blue Police and German gendarmes are now bosom buddies, and are now on the same side–against the Jews.

MYSTIFICATION OF THE HOLOCAUST

The author brings up, yet again, the odors emanating from burning Jews at Treblinka and Belzec. (pp. 67-68). She of course does not mention, much less mystify, the odors of decomposing corpses of Poles that had been murdered by the Germans. They don’t count.

Stoll again waxes lyrical, “The postwar desecration of the Jewish cemetery in Dębica, documented by Blumental, proves that, according to the will of the majority, no Jewish trace was to remain there.” (p. 10; See also pp. 55-on). That’s pretty rich. Just when were the Poles supposed to have voted on this policy? And too bad that sites of the dead have been variously desecrated or re-purposed all over the former Soviet bloc, and certainly not only the burial sites of Jews. I guess that the dead goyim, too, had been deliberately forgotten. See:

New Polonophobic Work Mystifies the Hunt for the Jews and the Imagined Polish Complicity in the Holocaust. Stoll