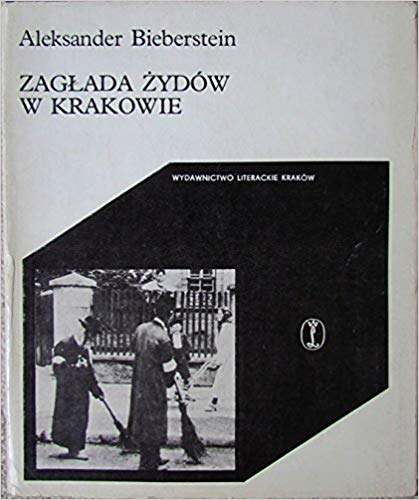 THE DESTRUCTION OF THE JEWS OF KRAKOW. This Polish-language book is a gem. [I thank courageous Polish historian Jerzy Robert Nowak for bringing this excellent book to public attention on a RADIO MARYJA audition.] Owing to the richness of this work, I can comment only on a fraction of its content.

German propaganda portrayed the forced confinement of Jews in ghettos as a protective measure against typhus. When typhus epidemics did not break out, the Germans changed their story. They now said that Jews had a natural symbiosis with lice, which was why they could easily spread typhus while not becoming ill themselves, and for which reason they still had to be isolated. (p. 43). Although the ghettoization of the Jews failed to starve and sicken them out of existence, the mortality rate was nevertheless 13 times that of the natural prewar rate. (p. 50).

Nowadays, we hear a lot of bilge about the so-called “Polish complicity in the Holocaust.” Ironic to this calumny, and as shown in this and succeeding section of my review, one would be on stronger grounds in leveling the accusation of “Jewish complicity in the Holocaust.” No nation is all angels or all demons. The Germans learned about some of activities in the ghetto owing to both Polish and Jewish informers, which Bieberstein describes as members of the darkest, most demoralized elements of their respective societies. (p. 30).

A number of Jews fled the Krakow ghetto and hid in the Aryan part of town. Polish denouncers of these fugitive Jews are described by Bieberstein as “FORTUNATELY RARE.” (p. 85; Emphasis added).

REPUDIATING THE SLANDER ABOUT POLES DELIGHTED IN JEWISH SUFFERING

Some Jews fled through a canal system, and Polish onlookers were described as sympathetic. (pp. 85-86). [This further contradicts common accusations of Poles mocking suffering Jews, or cheering at the Jews being sent to their deaths. For example, think of the anti-Polish propaganda scene in the widely-viewed highly-acclaimed movie, SCHINDLER’S LIST, of the Polish girl giving a sarcastic farewell (Goodbye Jews!) to the Jews being escorted by the Germans to their deaths.]

Jewish denouncers and Jewish Gestapo agents played a major role in the unmasking of fugitive Jews. (p. 86). In fact, Bieberstein described them as the “most dangerous element” facing Jews, and one that was totally unscrupulous. (p. 171). Bieberstein contended that Jewish informers were more common than Polish ones! (p. 220). The author listed over a dozen Jewish Nazi collaborators by name (pp. 171-174), although he realized that any such list cannot be complete.

We keep hearing over and over again the accusation that the Catholic Church did not do “enough” to help the Jews [whatever that is supposed to mean]. To top it all off, Jan T. Gross has repeatedly accused the Catholic Church in general, and Cardinal Adam Sapieha in particular, of being indifferent to the fate of the Jews under the German occupation. The facts don’t matter to those who defame Poland, but the truth is otherwise. Leading Krakow rabbis Szmelkes Kornitzer, Szabse Rappaport, and Majer Friedrich perished in Auschwitz, already in 1940, for seeking the intervention of Cardinal Sapieha on behalf of the Jews. (p. 223). Sapieha did intervene on behalf of the Jews, but it was futile. (pp. 38-39). [I thank historian Jerzy Robert Nowak for bringing the foregoing information to light, and for mentioning it repeatedly on RADIO MARYJA auditions.]

JEWS AND POLES IMPRISONED BY THE GERMANS AT PLASZOW

Plaszow camp was guarded by Nazi-collaborating Ukrainians. (p. 111). The Polish and Jewish inmates of the camp got along well, and helped each other. (p. 107). Later, in July 1943, separate barracks were built for the Poles. The Poles were treated worse than the Jews, being subject to an inferior sanitary system, and relegated by the Germans to the most arduous forced labor. (p. 133).

Bieberstein discusses Oskar Schindler. He portrays Schindler as one who was free of racial hatred against Jews, who did not believe that Germany would win the war, and one who was clever in his dealings with other Germans.

Countless foreign-language Holocaust books have been translated into English, but not this one. Why not? Could it be because of its fair and objective portrayal of both Polish and Jewish conduct?