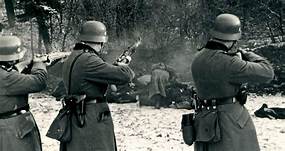 The Polish League Against Defamation issued a statement on an article published in “The New Yorker” magazine. It claims that Poland bares responsibility, as a nation and as a state, for the murder of its 3 million Jews during the Holocaust.

In the article, the author puts forward the claim that “in order to clear the nation of the charge of murder of three million Jews, the Polish government is going so far as to prosecute two scholars for defamation,” referring to the case of professors Grabowski and Barbara Engelking, who have been sued for claims they put forward about Edward Malinowski in their 2018 book “Night Without End: The Fate of Jews in Selected Counties of Occupied Poland”.

According to the authors, Mr Malinowski, a prewar mayor of a small village called Malinowo, led the Nazis to a group of Jews hiding in the forest outside the village, which led to the death of twenty-two Polish Jews.

A Warsaw district court found that the claim was unsubstantiated and that severe academic malpractices had been undertaken to reach that conclusion. The court ruled that the article had indeed defamed Malinowski, and ordered the authors to apologise to Filomena Leszczyńska, Mr Malinowski’s 81-year-old niece, who had brought the libel suit to court.

The full statement of the Polish League Against Defamation:

“To the Editors of “The New Yorker” magazine:

We are writing to express our shock that such an esteemed literary publication as New Yorker published an article by Masha Geseen entitled The Historians Under Attack for Exploring Poland’s Role in the Holocaust. There are many theses in this article that we could dispute. For example, the characterisation of the court case in question in itself is a misrepresentation. The author ties this case to seeming desire by the Polish government to criminalise scholarly endeavors. Nothing is further from the truth. This case was a civil suit brought up by Filomena Leszczynski for an erroneous and extremely harmful portrayal of her family’s actions during WWII that has caused great disrepute to the prestige of her family. Professor Engelking herself admitted that this portrayal was made in error and that she did not correctly identify the members of Malinowski family that took part in the actions she described. Masha Geseen, however, mischaracterises this case to take to a level that is almost sinister in nature and very far from reality. We could also discuss in detail errors made by professors Gross and Grabowski, whose work Masha Gessen cites as evidence for her viciously anti-Polish arguments, that have been brought to attention by several notable scholars of the period. At this time, we are going to focus on what we believe are two most shocking arguments made in the article: comparison made by the author of events in Poland to what goes on in Russia and the truly scandalous libel of virtually the entire Polish nation made in the subtitle of the article.

The “defamation-by-proxy approach” argument made by Masha Geseen that tries to tie the Leszczynski case somehow to developments in Russia with Alexei Navalny is nothing else than an attempt to stand the reality on its head. Masha Gessen somehow tries to use this opportunity to paint the current Polish government in the same light as the Putin regime. Nothing can be further from the truth. There probably is no other government currently in Europe that is more wary of the villainous nature of the current regime in Kremlin. The current Polish government consistently brings to light examples of continuous Russian aggression that threaten the stability of the region and the world. It consistently stands together with its neighbors and allies to oppose the annexation of Crimea, attacks on Georgia or support for the rebels in Ukraine. It works vigorously to counter Russian hybrid warfare and constantly pushes strongly its NATO allies to take a strong stand against Russian aggression. We will not even get into the still unresolved issues regarding the circumstances of the April 2010 crash that killed president Kaczyński together with many other members of the Polish political and military elite. We fear that arguments Masha Gessen makes align with Kremlin’ attempts to rewrite the history of WWII. Kremlin for years has used its information machine to put the blame for WWII on Poland in order to hide its own culpability for the beginning of the war and its alliance with Nazi Germany to invade Poland in September 1939 that werethe ultimate cause for the death and destruction that war brought. It continuously uses its propaganda machine to hide crimes such as mass murder of Polish army officers in April of 1940. Now, it seems, it found an author that adds to this misinformation campaign by willingly fabricating an analogy that absolutely does not hold water in order to further attack Poland and help Russia spread its lies.

​The most shocking, however, is the subtitle of the article that states: “To exonerate the nation of the murders of three million Jews, the Polish government will go as far as to prosecute scholars for defamation.” This is nothing less than a scandalous libel of an entire Polish nation. It is so scandalous because even if we where to accept the most outrageous arguments about Polish culpability for participation in the murder and denunciation of Jews, no one has gone as far as to claim that the entire Polish nation was culpable in murder of three million Jews. Even the most fantastic figures provided by professors Gross, Grabowski, or Engelking, do not go that far. By suggesting that Poles were at fault for the deaths of three million Jews this argument does nothing less than re-write the history of the entire war. It basically removes any blame from Nazi German invaders and the Soviet Union and puts it completely on backs of Poles. It is a very sick revision of history that blames the nation that was one of the main victims of the Nazi and Soviet aggression for crimes committed by the invaders. We want to remind the author of the article and the editors of New Yorker that the war began with invasion of Poland by Nazi Germany on September 1, 1939, that the independence of Poland was ended when it was stabbed in the back by the Soviet invasion on September 17, 1939 in which the Stalin regime fulfilled the agreement it made with the Nazi Germany in the Molotov-Ribbentrop Act. We would like to remind the author and the editors that of October 1939 Poland seized to exist as an independent state and its territory was incorporated directly into Nazi Germany, the Soviet Union or became part of German administered General Government territory. The crimes of Holocaust were perpetuated by Nazi German administration. We would like to remind the author and the editors that six million Polish citizens were murder during the war, according to current accounts almost 2.7 million of these victims were ethnic Poles. During the war the Polish territory was occupied, German officials committed gross crimes against Jews, ethnic Poles and other citizens of the multiethnic pre-war Polish Republic. Polish economy and society were devastated by the war. It took decades to rebuild.

The evil of this Masha Geseen’s articles lies in the fact that it accuses the Poles of revision of history, when itself the author distorts its history in a most fantastic way to push a completely false and libelous vision of history. A subtitle suggesting that the Polish nation is responsible for the death of three million Jews is nothing less than a shocking libel. We do not know whether this was the invention of the author or of the editors, but we earnestly hope that the editorial staff of the New Yorker will recognise its error in putting this article forward and will remove it from the public sphere. We cannot believe that the editors of the New Yorker have become so anti-Polish that they are willing to help perpetrators re-write history in order to place the blame on the victims.

To end let us quote David Harris, the CEO of the American Jewish Committee- “defamatory subtitle in @New Yorker piece by @mashagessen: ‘to exonerate the nation of the murders of three million Jews, the Polish government will go as far as prosecute…’ Germany- and Germany alone – was responsible for the Nazi death camps, from Auschwitz to Treblinka…”

The Polish League Against Defamation