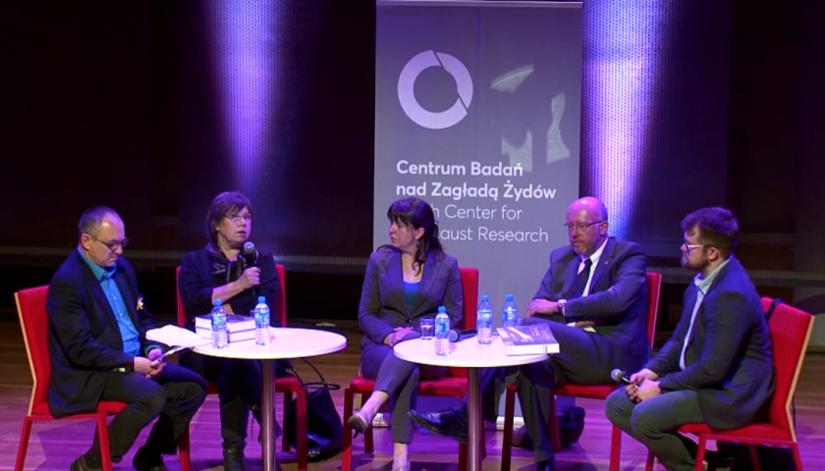 The trial against Barbara Engelking and Jan Grabowski, co-authors of the controversial book “Dalej jest noc”- ‘It’s still night’- began in the District Court in Warsaw.

Everything indicates that the defendants, accusing Edward Malinowski of having denounced and as a result caused the extermination of Jews living in his village during World War II, committed research and methodological errors – including mixing up two different people with the same name and surname and merging their biographies into one. The case against the authors of the publication was brought to court by Edward Malinowski’s niece, Filomena Leszczyńska, who aims to restore her uncle’s reputation. She is supported by Reduta Dobrego Imienia (an organization defending the good name of Poles and Poland). In fact, Edward Malinowski was a Polish hero who, risking his life, helped Jews and hid them from the Germans.

At today’s hearing, however, the parties did not testify because of the absence of prof. Jan Grabowski, who, according to his legal representatives, was not properly notified.

In this case, in our opinion, it was necessary to conduct a very solid verification of historical sources. Unfortunately, in my opinion, the authors of “It’s Still Night” did not do this, and therefore slandered an innocent man. The publication by Grabowski and Engelking presented a false version of events, and such actions – in my opinion – stains the personal reputation of not only the niece but every Pole.

– states Maciej Świrski, president of the Reduta Dobrego Imienia, who supports Filomena Leszczynska in her fight to restore her uncle’s good name. He adds that at today’s hearing, the defendant’s attorney downplayed the offense by calling the defendants’ merging of the biographies of two different people a mistake.

This is not the only “mistake” made by the authors of the controversial book. Information about the alleged involvement of Edward Malinowski in the murder of Jews was was based by the authors on the testimony of Maria Wiltgren (a Jewish woman saved by Edward Malinowski), submitted in 1996 to Yad Vashem. It is worth noting, however, that Maria Wiltgren (then as Estera Drogicka) presented her very different testimony in 1950, defending Edward Malinowski during his trial. Then, yet different biographical details were presented by Maria Wiltgren (then Estera Drogicka) shortly after the war, when she applied for a job in UB (Security Police). The employment contract was signed by her, and her file as an employee of the Security Service Office has also survived. The authors of the book – according to the plaintiff – did not verify the most crucial documents, the biographies of Maria Wiltgren, in which she appeared under four different names. They completely omitted the CV that the woman submitted shortly after the war when applying for a job at the Security Office. They also omitted her testimony included in the files of the 1950 trial of the survivors whom Edward Malinowski helped, risking his life.

The conduct of the authors of the publication is – in my opinion – contrary to the ideas of reliable scientific work. We came across this particular inaccuracy, but we suspect that there are many more errors of this type, as other historians have already pointed out.
– adds Maciej Świrski.

Edward Malinowski, the uncle of Filomena Leszczyńska, was presented in the publication “It’s Still Night” as “an accomplice in the deaths of several dozen Jews who were hiding in the woods and were ousted to the Germans” whereas, in fact, Mr. Malinowski helped the Jews. Jan Grabowski and Barbara Engelking, while accusing Malinowski, did not bother to carry out a thorough analysis of the documents. It seems obvious to any respectable historian that if this research had been done diligently, the biographies of Edward Malinowski, son of Stanisław, mayor of Malinów and the life of another Edward Malinowski, son of Adolf, former mayor of this village, would clearly have been seen as a mismatch. The two men had the same names, and during the occupation both had contact with Maria Wiltgren. It was her testimony, as the defendants admit, that gave rise to the accusations brought against Edward Malinowski – uncle of Filomena Leszczyńska.

These allegations were already refuted during a trial in 1950, in which survivors themselves testified in defense of the accused, Mr. Malinowski. As for the account of Maria Wiltgren herself, it should be emphasized that she was only a so-called hearing witness. At the time of denunciation of the Jews hiding in the forest near Malinów, she was not in this village. She arrived there only a year later. What’s more, she gave her testimony, which Barbara Engelking and Jan Grabowski used, in 1996, which was over 50 years after the events from Malinów, reporting only what she heard a year after the events. According to the lawyers representing Filomena Leszczyńska, the defendants did not properly analyze Maria Wiltgren’s documents and testimonies, and they did not sufficiently substantiate their thesis that the accusations by Maria Wiltgren referred to Edward Malinowski described in the book.

In order to remedy the harmful effects of the violation of her personal rights by the defendants, Filomena Leszczyńska, with the support of RDI, demands corrective actions in the form of defendants’ public statements, reprints, with, among others, truthful testimonies of Maria Wiltgren (then as Wiśniewska) as well as a financial compensation in the amount of PLN 100,000. Reduta Dobrego Imienia and Ms. Leszczynska bear the costs of bringing the case to court.

The original article, in Polish, can be accessed here:
https://wpolityce.pl/polityka/470653-ruszyl-proces-przeciwko-engelking-i-grabowskiemu

“Auschwitz was nothing”, when compared to what was going on in the Security Police (UB) torture chambers.