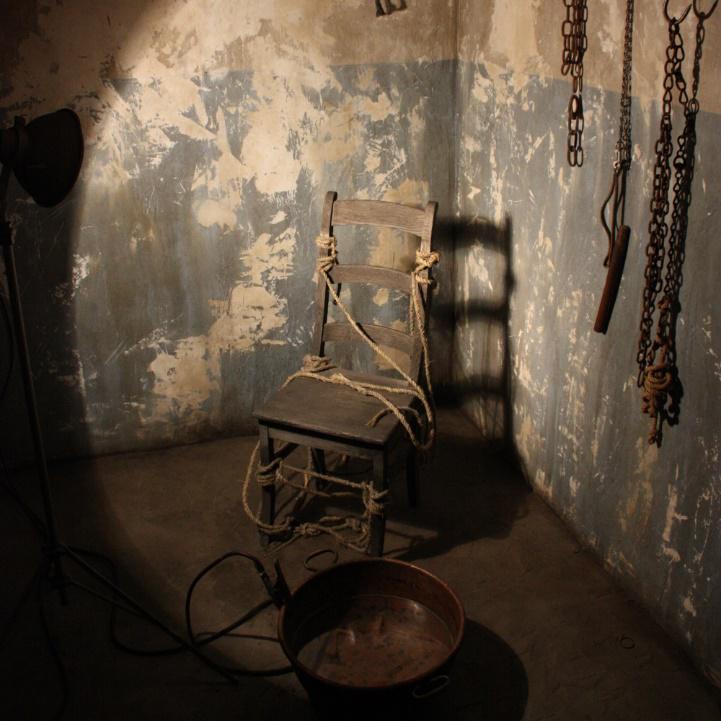 Unimaginable and cruel torture lasted for entire months. Not even pregnant women and children were spared punishment. In the times of Stalinist terror, tens of thousands of people were subjected to brutal interrogation methods and lost their lives in prisons, pre-trial detention and labor camps.

Those working for the UB (Security Police) were real monsters. They were demoralized, emotionally unstable, alcoholics and illiterates. They turned the lives of their victims into hell, as told by Witold Pilecki, who was tortured for months:  I can’t live anymore […], I’m done. Because Auschwitz was nothing compared to this.

The Bird Should Sing

Established in 1944, the security apparatus was the arm of the communists, necessary to maintain power in Poland. The Ministry of Public Security had huge funds exceeding the budget of many other key ministries. At the end of 1944, the security service employed about 2,500 people, a year later about 24,000, and in 1953 – over 33,000 officers, who enjoyed many privileges.

We do not know the exact number of those arrested by the security service for so-called anti-state activities. If you believe the data of the then Department of Prisons, in 1945–1953 approximately 1,000,000 people passed through prisons and camps . The Minister of Public Security, Stanisław Radkiewicz, said the following about the methods of the security apparatus:

“the authority to use strength and violence is there to be used, one should resort to the use of this authority when it is necessary to beat, arrest and incarcerate. At that point the attitude must be ruthless.”

In the picture: Witold Pilecki during his trial, soon to be convicted, sentenced to death and forgotten.

Colonel Józef Różański, the director of the Investigation Department, was a believer in the extreme, no restraint cruelty. He adhered to the principle that “the bird must sing”. He was a sadist, deriving satisfaction from torturing prisoners. Włodzimierz Lechowicz heard this from him:

“You will die when we want to, but only before you curse a hundred times that your mother gave birth to you. We will rip your veins out and break your bones, and we will reassemble them in the other room – until we succeed and for as long as we want.

The UB executioners kicked and beat the interrogated with fists, as well as whips, rubber-coated ropes, rubber clubs, leather straps with metal buckles, key rings or rifle butts. During the occupation, Kazimierz Moczarski, head of the Information and Propaganda Bureau of the Home Army Headquarters, experienced as many as 49 types of torture.

The writer mentioned them in a letter to the Supreme Prosecutor’s Office of the Polish Army in Warsaw of February 24, 1955. In addition to the most sophisticated ways of beating, he also counted, among other things, pulling hair from various parts of the body (including genitals), crushing fingers, pulling nails, burning with a flame or a cigarette, and sleep deprivation for several days.

Interrogation methods of the UB were also remembered perfectly by Stanisław Krupa, once a soldier of the Home Army “Zośka” Battalion, imprisoned in the infamous X Pavilion of the Mokotow prison at Rakowiecka in Warsaw. Waldemar Kowalski gives his account in his book ” Heroes from the pits of death “:

“When my tormentors found that beating no longer worked for me, they reached for another way. My arms and legs were tied and seated on a hook (…). God, this is a terrible torture! The whole body weight rests on the centimeter thick tip embedded in the wall and bent (…) iron hook. In addition, they seat you so that you lean on your tailbone. Even slight movement causes the hook to stick into the rectum.

In the picture: the accused “collaborators” of Witold Pilecki during his trial.

Keeping the prisoner in a wet or dry prison was also a popular method of getting the prisoners to “reveal the truth.” In the first case, the cell was filled with water or a content of a septic tank. General August Emil Fieldorf “Nile” spent three weeks in such conditions. In the second variant, the prisoner sat in isolation for many days, in the twilight, in his own excrement.

You will go to Brzezinka

The torturers had no mercy even for pregnant women and children. In July 1955, Tadeusz Płużański revealed the terrifying details of the investigation in a letter sent from the prison in Wronki to the Council of State of the Polish People’s Republic:

In relation to my wife, a system of abuse of the most cruel kind, trampling on her female dignity was used. She was blackmailed that if she did not sign everything that was presented to her for her signature, I would be shot.

Stanisława Płużańska was pregnant at that time. She had a miscarriage due to torture and received no medical help. Extremely exhausted, she lost consciousness, loomed, screamed. She recovered in the prison hospital in Grudziądz, where a doctor took care of the dying woman.

In the picture: General August Emil Fieldorf “Nil”. He was tortured and hanged in prison on Rakowiecka.

Even the children were not spared torture. The Łódź IPN has charged two UB personnel – Tadeusz Król and Tadeusz Molenda – with physical abuse of high school students in Piotrków Trybunalski and Wolborz, who distributed independence leaflets.

During many hours of interrogations, the boys were beaten with fists, a piece of cable and a rubber truncheon. They were tied to the bar, head down, then kicked on the head and ribs. Molenda liked to beat the children hanging the same way the buttocks by a cable. We read in the case file that:

the interrogators restrained [students – AB-R.] by hands and wrists, having previously put them under their feet, and after having a stick placed under their hands, they were hung […] between two desks, gagged, and then water was poured into their noses.

In the picture: A writing carved by a prisoner in one of the cells of the Public Security Office in Warsaw on 8 Strzelecka Street

Some of the people interviewed were not even 15 years old. And the nightmare was just beginning for them. In the summer of 1951, most teenagers were convicted and sentenced to serve in the “re-education” camp in Jaworzno. Jerzy Biesiadowski, one of the tortured boys, and in the Third Republic an auxiliary prosecutor in the trial of his torturers, reported:

The prisoners remembered Commander Salomon Morel well. During the first appeal, he said to us: “You will not survive, you will go to Brzezinka concentration camp. Unless you obey. ”

As a greeting, we heard from Morel: ” You didn’t come here to live, but to rot .” I thought we were in Auschwitz.

Mieczysław Wybraniec, , was one of the few torturers who, after many years, had been brought to justice. He was sentenced to six years in prison although the prosecutor had demanded a higher sentence. He was apparently so cruel that even his colleagues called him the executioner, and his superiors punished him for torturing a prisoner to death during an interrogation. Only one of the battered prisoners lived to hear of the conviction of their torturer.

Bandit naked all the way down

According to the findings of the Institute of National Remembrance, over 8,000 death sentences were issued in Poland during the Stalinism period. Nearly 5,900 of them were held by military courts (almost 50% were executed). One of the witnesses cited by Władysław Kowalski in ” Heroes from the pits of death ” described the execution:

(…) at least three guards led the convict to an old boiler room in the southwestern part of the prison yard. Handled by two guards he entered. When he crossed the threshold, he got shot in the back of the head. In general, one shot was enough. Those who killed were skillful. They didn’t miss. They smashed their brains with the first shot.

The dead and killed were divided into four categories: deceased in prison, suicide, executed by virtue of sentence, and “bandit”, usually a soldier of the underground independence. Only the bodies of suicides and those sentenced to death could be handed over to the family with the consent of the head of the WUBP, after consultation with the local prosecutor. Others went to nameless graves.

The bodies were buried in places of execution or in uninhabited, secluded areas, such as Pola Mokotowskie or Kabacki Forest. In the first years of Stalinism, the murdered also buried in the area of ​​the Racecourse in Służewiec. It was particularly disgraceful to rummage at landfills or in waste pits. “Bandits” were often given to anatomy facilities, where their remains served as exercise material for medical students.

From the spring of 1948, the area next to the wall of the Powązki Cemetery, today’s “Łączka”, was burial place for the murdered. The maximum two-meter pits were dug during the day. Prisoners were buried without coffins, often several in one pit, naked or in underwear, sometimes in paper bags. It happened that they were dressed in Wehrmacht uniforms.

According to the report of the guard Władysław Turczyński, who was burying the bodies of prisoners, it appears that almost 300 people are buried there. What about the others? The historian Krzysztof Szwagrzyk wrote that in the years 1944–1956 in Mokotów alone over a thousand people were killed. To this should be added the hundreds of victims from prisons in Bialystok, Krakow, Lublin, Wroclaw and other cities.

Families often did not know how their relatives died, and in many cases, they still do not know their resting places. So far, the remains of about 200 people have been found on “Łączka”. As of now only 40 of them have been identified. The exhumation works are managed by dr Szwagrzyk. He told the author of ” Heroes from the pits of death ” that today it is a sacred matter for Poles.

“Heroes from the pits of death” is a publication dedicated to people who “live” even though they were murdered long ago. Judged, but deprived of the right to defense. Those, which – if we looked at the intentions of the executioners – we were supposed to talk only casually, seeing them as bandits, common criminals, traitors of the nation, anti-state pests. Heroes who died in the casemates of the Mokotow prison after reading the sentence, allegedly “on behalf of the Republic of Poland”.