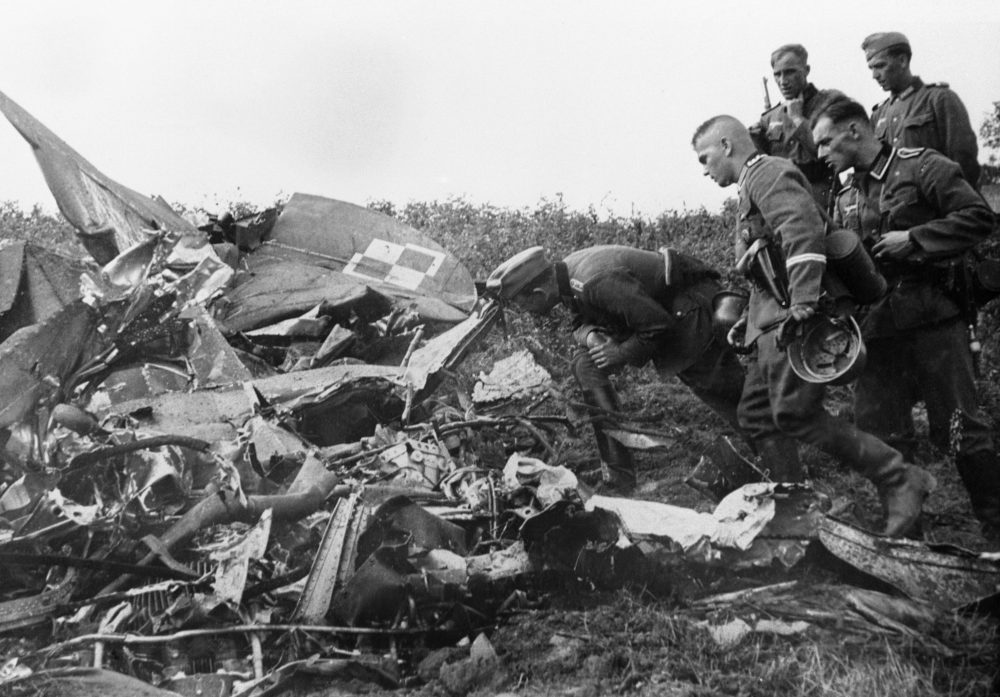 On Sept. 1, 1939, at around 4:48 a.m., an aged German battleship opened fire on a Polish port outside the northern city of Danzig. Strategic bridges were hit at the same time, and air raids began shortly after.

Then, German troops poured over the border.

“Poland was the next item on Hitler’s menu after the dismemberment of Czechoslovakia,” says historian Roger Moorhouse. “He always wanted to go east. That was where his plans for Lebensraum were — the ‘greater German Empire’ as it were.

“He saw that as his playground.”

Diplomatic tensions had been brewing between the two nations throughout the summer of 1939, according to Moorhouse (@roger_moorhouse), and Poland had done everything it could to strengthen their relationships with foreign allies like Britain and France.

“It had been hoped that that would stave off any sort of German attack,” says Moorhouse, author of the new book, “First To Fight: The Polish War 1939.” “The Poles knew that they were facing very hostile enemies.”

This month marks 80 years since the start of World War II: the German invasion of Poland. The conflict would take a terrible toll on the country and 6 million Poles would die before the war ended in 1945. It is estimated Poland lost about a fifth of its population during the conflict.

Last Sunday, on the anniversary of the war’s outbreak, somber ceremonies were held across the country. Speakers included Germany’s president, Frank-Walter Steinmeier. He said Germany would never forget the atrocities committed under Nazi rule.

“I bow my head before the Polish victims of Germany’s tyranny,” he said. “And I ask forgiveness.”

On the differing narratives of World War II, and Germany’s brutality against the Poles

“I don’t know how the American narrative of World War II, which is obviously rather different, given that for the Americans the war starts very obviously in 1941. But the British narrative of World War II in Europe certainly is one where you could say that we sort of assume that there’s this gradual development of this aspect of brutality and ideological warfare, which is something that sort of kicks in really after 1941 with the German invasion of the Soviet Union.

“But the experience that the September campaign, this invasion of Poland, actually shows us [is] that that’s ideologically fueled warfare, and the very deliberate targeting of civilians there is absolutely front-center in 1939 as well. So, almost every Polish town and village was affected with random massacres of civilians, massacres of POWs. It’s a sort of universal experience in 1939. And that’s one thing that I think I found quite shocking when I was writing the book.”

On whether the Poles fought back

“Absolutely. The Poles, again the stereotype, which really goes back essentially to Nazi propaganda of World War II, which tended to try and portray them as sort of foolish incompetents on horseback effectively. But the Polish army was actually rather good in general comparative terms to other armies at the time. It was about a million men. It had a good number of relatively modern aircraft and relatively modern tanks and so on. The main problem it had was that it was facing the Germans, who were the most technologically advanced military machine on the planet at the time. But yes, they did have a sort of thought out plan, and they tried to resist as best they could, and there are some really quite spectacular and sort of bitter pitched battles in this campaign of 36 days. So, they really did fight back. They fought very hard.”

“Poland was always on the agenda. It was also that Poland was reborn in 1918 after the end of the First World War, when the Germans and the Russians and the Austrians all collapsed, and the very existence of Poland in the interwar period was seen as it was almost personification of the Treaty of Versailles. So, both the Germans and the Soviets wanted to revise the Treaty of Versailles to their benefit, and that of course meant dealing with Poland, wiping Poland off the map yet again.

“So, there’s a sort of host of reasons, not least, as I said, the racial aspect — that the Nazis fundamentally viewed the Poles as inferior and considered that territory that they lived on was something that they could quite easily expropriate.

“The Western narrative, the English-speaking narrative, tends to forget: The Soviets are generally seen through the lens of the Grand Alliance, you know, post-1941. We can all remember the stereotypical image of Churchill and Stalin and Roosevelt all sitting together discussing grand strategy. And I think we tend to either whitewash the earlier period or we forget about it entirely or we view it through that prism.

“But for the period between 1939 and June of 1941, Stalin is effectively in cahoots with Hitler. He’s not in a formal alliance, but he’s in a in a cooperative arrangement we could say with Hitler. And this is and this is part and parcel of that. So, with the Nazi-Soviet pact of August of 1939 — which is another aspect that the Western historiography really doesn’t talk about as much as it should — the two had effectively made common cause, Berlin and Moscow. And this was the first expression of that common cause was their effectively joint destruction of Poland.

So, the Red Army invades on the 17th of September. It dresses up its engagement as a sort of humanitarian operation or a police operation, claiming that Poland had already collapsed and it was just going in to take care of Belarusian and Ukrainian minorities and so on. But that was really propaganda eyewash.”

On the number of Poles put into concentration camps

“Oh, millions. I think it’s a misconception that concentration camps were just for Jews. Anyone that the Nazis considered in any way suspect or someone undesirable — whether racially or politically — would be put into a concentration camp. The original concentration camps incidentally are not for Jews at all. Many Jews would have found themselves in there for other reasons. …

“Even Auschwitz, when it’s first established in 1940, is established as a concentration camp for Poles, and it only really evolves into that sort of function that we know so well, that hideous function of extermination, later on in its life. So absolutely, there are huge numbers of gentile Poles [who were] also in the concentration camps on Polish soil and elsewhere. And we have to be careful of course with this phrase, this idea of the concentration camps in anyway being Polish, because they’re not run by Poles. They are inhabited by unfortunate poles, but they’re certainly not run by them.”

On what life was like in Poland during German occupation

“Poland is wiped from the map. The Germans add various parts of Western Poland to Germany itself — are directly annexed — and then other parts are left as a sort of a rump state under German occupation. There’s a lot of ethnic cleansing of those territories that are directly annexed.

“A lot of Poles are deported to Germany for forced labor purposes as well. So, there’s a general sifting of the population, whether Polish or Jewish, with very difficult consequences for both categories. And even after that [with] the ongoing occupation, the Poles actually have the largest underground resistance movement in World War II Europe, which is something that again I don’t think we fully appreciate. So, they have this tradition of … conspiring against foreign occupation. Poland had spent 123 years wiped from the map from 1795 up until the end of the First World War, so it was something that they were very used to — actually living under a foreign occupation — and they sort of reverted to that type in 1939 and in 1941 and did so very well.

“But for ordinary Poles it’s an extremely difficult time living effectively under the jackboot of the Nazi regime, which could be very capricious. You could be taken out and shot, for example, for hiding Jews, fugitive Jews. If you were a Polish family and they found someone in your loft, the entire family would be taken out and shot. So, it’s an extremely difficult world for Poles to be living in.”

On how Poles today feel the effects of World War II

“It’s really front-center in Poland’s sense of itself, its national identity, its sense of commemoration of its own suffering. Poland has a really fascinating and rich but very, very difficult history really. Of course, World War II, you got this massive sort of sacrifice. As we said, one in five of the population are killed in World War II. They have the highest per capita death toll of any nation in World War II, which is an astonishing factor. Between 5 and 6 million people are killed. So, you can see there’s no family in Poland that is unaffected by this. They all have this in the locker as it were.

“And even going back beyond that of course, you’ve got the period of the partitions, and the whole Poland’s modern history is studded with these risings against foreign powers and brave but futile defenses against superior odds. And then of course, the war finishes, and Poland is then, as the quirk of history would have it, is doomed to 40 years of communism behind the Iron Curtain until communism falls in 1989. So, I say Poland’s modern history is not short on horrors, but World War II really caps the lot. It is the biggest horror of all, and it’s one that I think the Poles rightly perceive that the outside world doesn’t quite understand well enough.“

The Wolyn Massacre. 77 years ago, around 100,000 Poles were slaughtered with utmost cruelty by Ukrainian nationalists