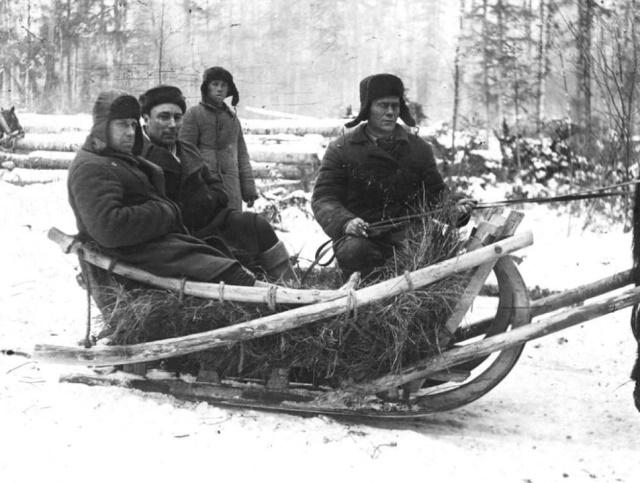 On February 9, 1940, seven-year-old Witold Rybicki and his family awoke in the middle of the night to banging on the door of their home in Lida, Poland (modern Belarus). Outside was an officer of the Soviet secret police, then called the NKVD, who gave his father orders: “Do not run away. Your house is surrounded by soldiers. You have an hour to pack your personal belongings. Do not worry about bringing much. Everything you need will be at your destination.”

The Rybickis were never informed of charges against them, evidence of wrongdoing, a sentence, or their destination. Witold, his parents, and four of his siblings were taken from their home to a train station, where they were loaded into a cattle car about 15 meters long by five meters wide along with about 40 other people. The car was completely bare otherwise, with just a hole in the middle of the floor for a toilet.

For nearly a month, the train traversed Eastern Europe and Russia toward Siberia, not allowing anyone outside of the cramped, filthy cars except for a short period on Saturdays. Every morning, soldiers delivered four gallons of water and one of soup for the entire car of 40 people.

The prisoners finally disembarked in a city called Tomsk. From there, they walked two days through the Siberian taiga (forest) in the dead of winter to a set of barracks with small, barren rooms built specifically for Poles. This was part of the Soviet gulag system, a chain of forced-labor camps and settlements where tens of millions of prisoners were punished and “reeducated” by the state through grueling physical labor in harsh conditions.

This account of life under Soviet rule is not an extreme outlier, but indicative of how the communist regime treated its own people. This week marks 100 years since the revolution that gave rise to communism in Russia and, subsequently, Eastern Europe, Asia, Africa, and Latin America. Avowedly Marxist regimes killed anywhere from 65 to 100 million people, a total so high that it is impossible for the human mind to conceptualize.
So goes the apocryphal Joseph Stalin quote, “One death is a tragedy; a million deaths is a statistic.” A good way to grasp the breadth of communism’s evils is to understand the depth of the suffering in the lives of its individual victims. That’s why the stories of the Rybickis and others are apropos.

The Rybickis Are Just a Few Out of Millions

The Rybickis’ plight is eerily similar to the famed accounts catalogued by Aleksandr Solzhenitsyn in “The Gulag Archipelago.” From the psychologically poignant nighttime arrest without explanation, to the inhumane transport by cattle car, to hard labor under-clothed in the bitter cold, to the starvation, to the omnipresent stench of death, to the totalizing oppression even outside of the gulags, the parallels between Witold’s story and other victims’ are striking.

The Union of Soviet Socialist Republics (USSR) and Nazi Germany invaded Poland in September 1939 and partitioned the country in two. The USSR deported to Siberia about one and a half million of the 13 to 14 million Poles in the eastern half of the country. Hundreds of thousands of them died or were executed in the process. Over decades, millions of kulaks, Cossacks, Ukrainians, Kazakhs, Soviet veterans, and Orthodox Christians, among others, suffered similar fates. The USSR killed 20 to 30 million of its own people in total.
Those who were considered educated, middle class, overtly religious, or had served in the military were the primary targets, according to Witold, because they were broadly viewed as threats to the communist regime. His father, Stanislaw, was a Polish veteran who owned a small farm, so off to the gulag system he and his family went.

Your Choice: Death By Enlistment Or In Prison

You Must Never Forget Our Stories

It would behoove our society, and the entire world, to better remember the evils of communism 100 years since.

Stories like the Rybickis’ sometimes don’t resonate with Western audiences because the material depravation foisted upon them is unimaginable to us. As Solzhenitsyn wrote, “[It’s impossible] for Western authors…to describe the perturbation of a human soul placed in a cell filled to twenty times its capacity and with no latrine bucket, where prisoners are taken out to the toilet only once a day.”

Solzhenitsyn’s stories about NVKD officers coercing confessions from innocent prisoners by crushing their testicles underneath the officer’s jackboot are ghastly to even try imagining. So too the mass executions carried out by binding, gagging, and burying prisoners alive, because it was more efficient than shooting them first. However, it is difficult to fully comprehend for Westerners who have not experienced immense and continuous physical pain. Thus, it is also worth considering the damage done to the human soul beyond the gulags.

When Government Is Supreme Above All

One hundred years later, there are still some efforts to whitewash the terrible legacy of communism, and reflexive repulsion toward communism has not been engrained in Western culture like that toward fascism. The New York Times published 39 articles on the “Red Century” this year, anesthetizing its readers towards communism. It mentions the gulag system in only two of those articles, and simply as asides. One in five social science professors identify as Marxists, and they have foot soldiers in the violent “Antifa” movement. Socialism has become more popular than capitalism among Democrats and young Americans.
The far-left insists it is a pointless exercise to remember historical aberrations perpetrated by Lenin, Stalin, Mao Zedong, Pol Pot, the Kims, the Castros, and so on. None of it was “true communism,” anyway. But all the crimes perpetrated by dozens of communist regimes in dozens of countries over 100 years that touched more than a billion people suggest a pattern. Karl Marx was a false prophet, and the proof is in the tens of millions killed by those who espoused his ideology. Communism was murderous in practice because it was murderous in theory.

Murderous Outcomes from a Murderous Theory

Anti-Communism Is a Moral Imperative

The full article can be read here:
https://thefederalist.com/2017/11/09/communists-family-soviet-gulags/