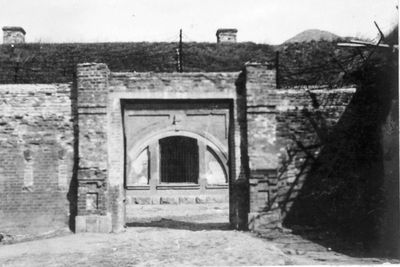 A WWII fort where thousands of Poles and Jews were executed by German soldiers is to be turned into a memorial site. At the outbreak of WWII, Fort III in Pomiechówek was used a POW camp by the occupying German forces before being turned into a concentration camp where inmates were tortured and murdered and then buried in mass graves.

Defence minister Mariusz Błaszczak said that researchers from the Institute of National Remembrance will begin to exhume the victims in June this year, and a memorial for the murdered will be built.

According to estimates, as many as 10,000 Poles and Jews died at the penal and investigative prison. It is known that their bodies are buried in mass graves located at the fort.

After laying a wreath at the fort, Błaszczak said: “This place is special, because only now the scale of the crime committed by the Germans is being discovered.

“Elites from Mazowsze were brought here and murdered. After the Second World War it was not possible to commemorate the victims,” the minister added.

At the start of World War II, it was used to detain prisoners of war. It became a concentration camp in 1941 and an investigative prison in 1943. The fort, where people were imprisoned, detained, interrogated and killed, covered about 5 hectares and included underground bunkers.

The execution and interrogation site was at the back of the fort. In 1943, the Germans erected a gallows there from which up to 40 people were hanged at the same time.

As well as prisoners of war, the Germans also imprisoned local residents who were displaced from surrounding villages, including children and old people. The prisoners had no access to water or sanitary facilities and slept on a cement floor.

In 1941, the Germans began to imprison and torture Jews from northern Mazowsze. They were starved, forced to eat raw meat, treated as draught animals and used as moving targets. Sources say that up to 10,000 Poles and Jews died in Fort III.

In 1942, a penal and investigative prison was established in Fort III. The cells were filled with Poles from surrounding villages, who were accused of cooperation with partisans or the Home Army.

Prisoners not only had to deal with inhumane conditions, but also torture. To force confessions, they were beaten and humiliated. The Germans kicked them, pulled their nails out, drowned them, hanged them from beams by their legs and hammered nails into their elbows, knees and hip joints. Many people died during interrogations.

The precise number of people who lost their lives in Fort III is not known, because in 1944 the Germans started to destroy the prison’s documents. However, historians estimate that every month between 100 and 200 people died there. Up to 100,000 people passed through the camp.

According to former prisoner Władysław Grylak, who testified for the Main Commission for the Investigation of German Crimes in Poland, the prison in Pomiechówek was one of the most brutal in areas occupied by the Third Reich.

“I state this with full responsibility. During the occupation I was in five Nazi camps – Pomiechówek, Auschwitz, Mauthausen, a camp in Yugoslavia and Neumark. The torture site in Pomiechówek was the worst in every respect. In the most degraded way, German fascists abused prisoners. They were murdered indiscriminately on a mass scale, in a particularly sophisticated and degraded way. In Pomiechówek there was also the worst food and the worst conditions,” he stated.

The fort was used as an ammunition depot by the army up to 2006, and it has been an Institute of National Remembrance research site since 2018. So far, the identities of 1,600 victims have been documented.

Minister Błaszczak appealed to people from that part of Mazowsze to pass on to experts testimonies and items connected with the people murdered in the fort.