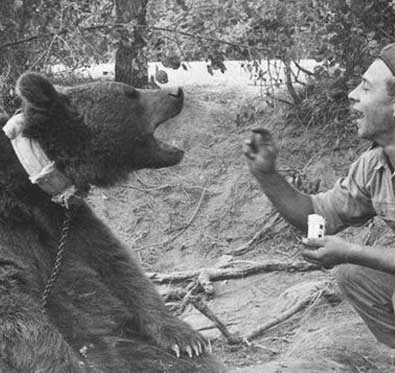 World War II, the 22nd Artillery Supply Company of the 2nd Polish Corps had an unusual soldier among its ranks, a 440-pound Syrian bear named Wojtek.

Wojtek first came to the company as a cub, but over the course of the war he matured and was given the rank of corporal in the Polish army.

Amid a long journey to join forces with the British Army in World War Two, one unit of the Polish II Corps stumbled upon an unlikely, and invaluable, comrade: A Syrian brown bear.

Poland bore a bulk of World War Two-related traumas. After the Nazis invaded Poland on September 1, 1939 — only to be followed by the subsequent Soviet invasion on the 17th — the country had only experienced a couple of decades of independence before it found itself under occupation once again.

Following the invasions, Stalin and Hitler agreed to a nonaggression treaty, which effectively divided Poland in two. Hitler broke that pact on June 22, 1941, when he ordered an invasion of the USSR.

In what came to be known as the Sikorski-Mayski Agreement, Stalin declared all previous pacts between the USSR and Poland to be null and void.

Among other things, this allowed Poles to create their own army, despite technically being on Soviet soil. That they did, and the army became the Polish II Corps led by Lieutenant General Władysław Anders.

In the spring of 1942, the newly-formed army left the USSR for Iran, along with the thousands of Polish civilians released from Soviet gulags. On the way to Tehran, the traveling Poles encountered an Iranian boy in the town of Hamadan who had found an orphaned bear cub. Irena Bokiewicz, one of the civilians, was so enamored with the cub that one of the lieutenants purchased him in exchange for a few tins of food.

The cub became a part of the 22nd Artillery Supply Company, and soon received its own Polish name, Wojtek (pronounced voy-tek), which translates to “joyous soldier.” Wojtek traveled with the company through the Middle East, as the unit made its way to join forces with the 3rd Carpathian Division of the British Army in Palestine.