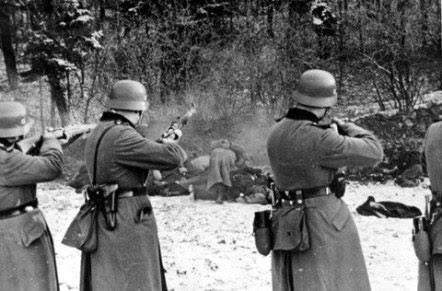 It was an early measure of the Generalplan Ost. About 60,000 people were killed as the result of this operation. The Intelligenzaktion took place soon after the German invasion of Poland, lasting from fall of 1939 till spring of 1940. It was continued by the German AB-Aktion operation in Poland.

These Polish elites were regarded as „Polish masters”, an undesirable trait that might cause Poles to disobey their German masters. Hitler himself decreed:
Once more the Führer must point out that the Poles can only have one master, and that is the German; two masters cannot and must not exist side by side; therefore all representatives of the Polish intelligentsia should be eliminated (umbringen). This sounds harsh, but such are the laws of life.
The elite of Polish society were regarded by Nazi racial theories as being most likely of German blood, because their dynamic leadership contrasted with Slavonic fatalism, but the removal of such elements was regarded as necessary to remove leadership from the Polish nation, and because their patriotism and hatred of Germany would prevent full-scale Germanization. Furthermore, German blood must not be used in the service of a foreign nation. (Their children were targeted for abduction and Germanization. Such programs, the Nazis believed, would prevent a resurgence of any intelligentsia.)

„(…) The General Government is our work force reservoir for lowgrade work (brick plants, road building, etc.,etc.).(…) Unconditionally, attention should be paid to the fact that there can be no „Polish masters”; where there are Polish masters, and I do not care how hard this sound, they must be killed. (…) The Fuhrer must emphazize once again that for Poles there is only one master and he is a German, there can be no two masters beside each other and there is no consent to such, hence all representatives of the Polish inteligentsia are to be killed. (…) The General Government is a Polish reservation, a great Polish labour camp.” – note of Martin Borman from the meeting Dr. Hans Frank with Adolf Hitler, Berlin 2 October 1940.
The action was realized by SS paramilitary death squads – Einsatzgruppen and the paramilitary organization of the German minority in Poland – Volksdeutscher Selbstschutz. The units involved were instructed by their commanders that their role would be far more difficult than merely fighting in battle, having to suppress obstructive populations or carry out executions.
The aim of this action was the elimination of Polish society’s elite, defined very broadly as: Polish nobles, intelligentsia, teachers, entrepreneurs, social workers, military veterans, members of national organisations, priests, judges, political activists, and anyone who had attended secondary school. People were arrested according to an „enemies of the Reich list” – Sonderfahndungsbuch Polen prepared before the war by members of the German minority in Poland in cooperation with German Intelligence.

The full article can be found here: