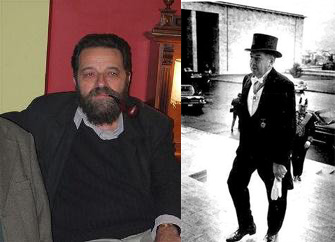 From a Comintern agent to a fanatical hunter of “Polish anti-Semitism”, the Gebert family figures symbolize/represent two pupating stances of a fierce aversion to Polish patriotism and “Polishness” in the circles of much of the leftist Jewish intelligentsia.

Bolesław Gebert – the father, a Comintern agent (the Communist International), was a typical Jewish Communist traitor, eagerly plotting the destruction of Poland and handing it over to the Kremlin.

Konstanty Gebert – the son (Dawid Warszawski), a journalist for the “Gazeta Wyborcza” newspaper, is a typical example of a much more sophisticated trend among the opponents of “Polishness” and the Catholic Church, a trend that specializes in publicizing accusations of alleged “Polish and Christian anti-Semitism.” With his attacks and “denunciations of Poland” abroad, Konstanty Gebert empowers the international anti-Polish offensive.

Bolesław Gebert (Konstanty’s father) was an old communist agent, one of the co-founders of Kremlin’s branch of agents working in the North American continent, which in effect means, for the Communist Party of the United States. Already at the beginning of his agent activities in the USA, he actively participated in anti-Poland activities. It was 1920 and Poland was threatened by the Soviet invasion, which would have advanced the cause of instituting Bolshevism in Europe, first by “trampling over the corpse of Poland”. It is strange that earlier none of the patriotic Polish authors recalled this gloomy episode in agent Gebert’s life. And this despite the fact that he himself boasted about it in his memoirs published during Jaruzelski’s time, otherwise filled with the most squalid communist propaganda. Describing his role in 1920, he stated, among others: “We were the only group among the Polish diaspora who fought against the Russian counterrevolution supported by the imperialists. The remaining Polish diaspora supported Piłsudski’s expedition and campaigned to buy Polish government bonds to finance the war with Soviet Russia. The action was carried out under the slogan: “Buy bonds to defeat the Bolsheviks” (Pol.:“Bij Bondem Bolszewika”). The Polish government attempted to sell 50 million dollars in bonds to Americans and the Polish diaspora. We fought this initiative and achieved results.” The boasting anti-Polish member of the Comintern campaigned so intensely against the initiative, that he indeed weakened the Polish Americans’ support for a mortally endangered Poland.

Gebert’s special qualities as a member of Kremlin’s agents in the U.S. clearly increased over the years, because in August 1932, he was delegated as one of the two representatives of the U.S. Communist Party to the 12th Plenum of the Executive Committee of the Communist International in Moscow. This was a manifestation of significant appreciation of the role B. Gebert played in undermining the democratic system of power in the U.S., at the service of the Kremlin. Finally, the trail of B. Gebert’s subversive activity in the USA was discovered and on 12 May 1934, he was sentenced to deportation from the United States to Poland. The Polish Ministry of Foreign Affairs, however, rejected the proposed “acquisition”, citing the fact that Gebert had never applied for Polish citizenship. The Soviet authorities also refused to accept him, wanting him to remain useful to them in the United States. Taking advantage of the carelessness of American secret service operatives,
B. Gebert could continue to work for the Soviets, to the detriment of the U.S., gaining the code name “Ataman” as a secret agent of the NKVD. According to Rafał Brzeski (in: “Nasza Polska” – “Our Poland”, dated 28 May 2002), Gebert specialized in “running agents coming from ethnic minorities”.

After the Soviet invasion of Poland on 17 September 1939, B. Gebert once again “shined” in vicious anti-Polish operations in the United States. Speaking at rallies, he vigorously supported and justified the “finishing off” of Poland by the Soviet Union in cooperation with the Third Reich. The Polish language daily, the “Dziennik Zjednoczenie” (Eng.: “United Daily”), a publication of Polish Americans, expressed indignity at Gebert’s maliciousness, stating, among others: “In writing total nonsense, no one surpasses B.K. Gebert, a member of the National Committee of the Communist Party of the United States, who in the Polish language speaks about the paradise that today’s Russian people live in.”

The growing role of Gebert as a very active KGB agent in the U.S. is widely described in the book published in 1999 in the U.S. by John Earl Haynes and Harvey Klehr: “Venona – Decoding Soviet Espionage in America “. B. Gebert skillfully camouflaged his actions, becoming one of the leading activists of the pro-Soviet American Slavic Congress. He organized and inspired pro-communist rallies of Americans of Slavic descent in Detroit, Pittsburgh and New York. In 1946, the FBI once again turned its attention to Gebert and his activity, considering his role as secretary general of a radical crypto-communist organization called the International Workers’ Order (IWO) as particularly dangerous. Threatened with arrest in 1947, Gebert hurried out of the United States to Poland, on board the M.S. “Batory”. Zbigniew Błażyński, who prepared the famous “confession” of the former deputy director of the Ministry of Public Security (Polish acronym: MBP) department, Józef Światło, announced Gebert’s role on Radio Free Europe. Światło at the time described Gebert’s role in the following words: “(…) he immediately becomes the flagship figure of the regime in the so-called trade unions. He joins the Central Council of Trade Unions, becomes the editor of the “Voice of Labor” (Pol.: Głos Pracy”), even taking the position of deputy secretary general of the Communist World Trade Union Federation. The regime uses him for propaganda agitation in trade unions in the West (…)”, (quoted by: Z. Błażyński : “Mówi Józef Światło” London, 1985, p. 167 (Eng.: Józef Światło speaking”).

Spied on by his wife

Kremlin activists, however, have always had a lot of distrust of those communist agents who spent many years in the West. This kind of suspicion also affected B. Gebert. Józef Światło recalled in his “confessions”:
“I knew Bolesław Gebert personally. Soon after his arrival in Poland, Bolesław Gebert began to be suspected of being an alleged American agent. On Moscow’s orders, he was removed from the Council of the World Federation of Trade Unions. The Ministry of Public Security followed him day and night and sent an agent against him, Krystyna Poznańska, who became his mistress, so that she could follow him better. As it turned out, later Bolesław Gebert married Krystyna Poznańska. The Ministry of Public Security allowed her to marry him so that she could better follow Bolesław Gebert as his wife. He only learned about all this from my testimony before the Congressional Committee in Milwaukee in the United States.” (op. cit., p. 168)

Błażyński himself wrote (op. cit., p. 168): “The role of Gebert’s guardian on behalf of the tenth department was faithfully and eagerly realized by Krystyna Gebertowa as his wife, who reports almost daily to her superiors about her husband’s behavior, contacts and activities (… ) the old communist Bolesław Gebert also has his incriminating file in the tenth department of the Ministry of Public Security. The documents in this file and the supplementary reports of his wife are waiting only for the right moment, when suddenly Gebert ceases to be useful for the propaganda purposes of the regime. “ One can only sympathize with the son of Bolesław Gebert, today’s editor of “Wyborcza” – Konstanty Gebert (Dawid Warszawski) that he grew up in such a nasty atmosphere with his own mother spying on his father. It is difficult to assess the wounds that affected his psyche when he learned from Światło’s testimony of this shameful role of his mother. And he had to find out, because it is hard to suppose that such a politicized member of the leftist opposition would not have read such a basic document, which were the “Światło confessions”. It is worth adding that Leszek Żebrowski wrote about the aforementioned Krystyna Gebert (née Poznańska) that she was an MBP warrant officer and: “the organizer of one of the cruelest Voivodship Public Security Offices (in Rzeszów) in 1944-45.” (according to L. Żebrowski “People of the UD – three generations ” (in: “Gazeta Polska”, dated 30 September 1993).

The Antipolonism of Dawid Warszawski

Even acknowledging that the above conditions (mother of Konstanty Gebert spying on her husband), could have had a very painful and deforming effect on the psyche of Konstanty Gebert (Dawid Warszawski), it is hard to justify his ferocious phobias towards Polish patriotism and the Church and the resulting huge damage he has inflicted on Poland’s image abroad.

I have written many times in various books and articles on the numerous anti-Catholic and anti-Polish “exploits” of D. Warszawski. Therefore, here – for reasons of lack of space – I will limit myself to listing only a few characteristic examples of his actions.

Warszawski has often complained about alleged Polish “anti-Semitism” and the lack of adequate readiness of Polish Catholics for dialogue with the Jews. He himself “best” showed how he understood this “dialogue” in 1989, when he vulgarly and slanderously attacked the Primate of Poland, Józef Glemp, in the pages of the Jewish quarterly magazine “Tikkun“, published in the United States. There, he called the views of the Primate of Poland as being “arrogant and stupid” – a rather peculiar manifestation of “willingness to have a dialogue” on the part of a Jewish community member (!).

On 26 July 1996, in the Ex Libris supplement to the “Życie Warszawy” publication, Warszawski published one of his most libelous texts, thoroughly distorting the history of Polish-Jewish relations. He claimed there, among others, that before the war, almost no Jew could become a senior officer in Poland due to discrimination against Jews. It turns out that Warszawski is so lazy that he does not even read “Gazeta Wyborcza”, which he co-edits. He could learn from it that about 400 Jewish officers of Jewish ethnicity were killed in Katyń. Extremely dangerous for the image of Poland and the Catholic Church in Poland were his numerous “denunciations” of Poland in foreign publications, like the earlier quoted text in “Tikkun“. Warszawski particularly intensified his calumnies on the occasion of the publication of Gross’s “Neighbors”. Among other activities, in an article published in the German “Die Welt” he wrote: “Poles should accept their crimes against the Jews as part of their own history” (quoted after correspondence of W. Maszewski from Hamburg, “Warszawski slanders Poles”, in: “Nasz Dziennik” (Eng.: “Our daily”), dated 18 July 2002).

Dawid Warszawski became a leading exponent of Jewish nationalist triumphalism in Poland, the belief that the Jewish minority should play a dominant role in Poland. How eloquent in this respect were his comments posted in the American monthly “Moment” in 1998, which published in his article: “By 2050, Poland will become an economic powerhouse with Polish Jews as its driving force”. Warszawski wrote there, among others: “By the year 2000, Poland will have a Jewish community of about 30,000 people, six times larger than in 1989, when the serious Jewish revival began in earnest. (…).”

“In its determination to join the European Union and get rid of the political beliefs that made the Polish nation a hostage to history for 2,000 years, young Poles have abandoned both bad and good traditions. They prefer to learn the German language rather than the history of wars with Germany. (…) Anti-Semitism has been marginalized. At the same time, all traces of national identity and tradition have been forgotten (…). In the year 2010, Jewish professors will dominate the faculties of university departments teaching Polish history and tradition [emphasis by: JRN, the author(…)]. The Polish Jewish lobby will soon grow into a force closely linked with the amazing development of the Polish economy (…) By the middle of the next century, Poland will become the continental economic power and Polish Jews throughout Europe will be its guiding force. [emphasis by: JRN, the author.] (Quoted by: T. Pająk “And the Nation is asleep!” (Pol.: A Naród śpi!), 2nd edition, Tomaszowice 2002, pp. 291-292).