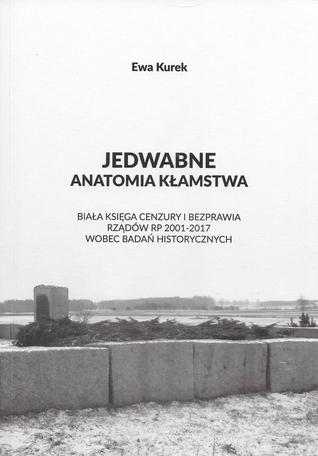 A book review by Jan Peczkis (in English)

THE ANATOMY OF THE LIE SURROUNDING JEDWABNE: A WHITE BOOK OF CENSORSHIP AND LAWLESSNESS OF THE POLISH GOVERNMENT 2001-2017 TOWARDS HISTORICAL INVESTIGATION, is the title of this blockbuster Polish-language book.

Author Ewa Kurek is a historian. Because she wants to maintain scholarly detachment as a historian, she is less concerned about “who did it” at Jedwabne than she is for a long-overdue, complete, and unfettered exhumation at Jedwabne in search of the truth. (p. 137).

WHY “BOTHER” WITH JEDWABNE NOW?

There is no escaping the fact that Jedwabne is the showcase of anti-Polish propaganda. Kurek points out that, wherever in the world the inhabitants of Jedwabne travel, they report being accused of being murderers. (p. 140).

Because the Polish government intervened in 2001, arbitrarily stopping the exhumation at Jedwabne, this subject has, for over 17 years now, in Kurek’s words, become a festival of fantasies and falsehoods. (p. 137). The suddenly-halted forensic dig has basically frozen and legitimized Jan T. Gross’ tale on this subject, and the LEWAKS, certain Jews, Germans, and others, have had a field day with Jedwabne. [Kurek does not mention the fact that countless history books now mention Jedwabne and present Polish guilt as fact.]

Every year at Jedwabne, there is the usual litany of Polish apologies involving politicians, bishops, rabbis, etc. (p. 208). Meanwhile, Poles are supposed to sit quietly, while more and more egregious lies are told worldwide about Jedwabne. (p. 209).

The Jedwabne affair has long been part of the PEDAGOGIKA WSTYDU (the politics of shame). GAZETA WYBORCZA, Poland’s main leftist newspaper [BTW, funded by George Soros] and its editor Adam Michnik vel Szechter, work overtime to discredit Poland in the eyes of the world, and among Poles themselves. (p. 162). The goal is for Poles to think that they are a hopelessly bad people: First it was Poles imbibing anti-Semitism with their mother’s milk, then it was Poles killing Jews during the Warsaw Uprising (1944), then it was the ZOLNIERZE WYKLECI as bandits, and now it is Jedwabne. (p. 149).

For these reasons alone, it is high time that a proper forensic investigation is conducted, and the truth be told.

Polish law specifies that, in the case of an alleged murder, the body must be exhumed in order to determine the manner of death in order for the trial to proceed. (p. 176). The Communist (PRL) courts failed to comply with this basic law, which went back to the ancient Romans. Thus, the 1949-1950 trials at Lomza, on which presumed Polish guilt for Jedwabne is largely based, are not legally valid.

Jan T. Gross began his media circus with NEIGHBORS, and Poland was convicted in the press.

Then came the “investigation”. The Polish government rejected the findings of critical historians such as Tomasz Strzembosz and Piotr Gontarczyk. (p. 19). One of the unwelcome findings was evidence of massive Jewish-Soviet collaboration, against Poles, at Jedwabne, in 1940. For instance, eyewitness Kazimierz Sokolowski described how the Soviets founded a mostly-Jewish militia, and these traitorous Jews began arresting various Poles, both prominent and ordinary. They extorted money from Poles, and forced them to vote “Soviet” in the sham elections. (p. 49).

The half-exhumation at Jedwabne, conducted in 2001, proved that nowhere near 1,600 Jews could possibly have fit in the mass grave, unless perhaps they were dwarfs. Yet many sources to this day, oblivious to the facts, continue to repeat Jan T. Gross’ figure of 1,600. (p. 139). Then again, if it makes for a better Jewish-victimization anti-Polish story, why not?

Experienced forensic specialist Andrzej Kula was allowed only a parody of an exhumation, owing to the objections of rabbis, before even that was halted. (p. 92). The final IPN report ignored Kula’s findings. (p. 94). Even so, mass graves were not found where the Jewish accusations said they would be (p. 97), severely damaging their credibility.

The politics–not science–behind the quickly-stopped forensic dig is not surprising. The INSTYTUT PAMIECI NARODOWEJ (IPN) is dominated by functionaries, not historians. They follow the political winds. When politicians wanted them to concern themselves with the ZOLNIERZE WYKLECI, they did so. Twenty years earlier, they would not hear of it. (p. 137).

[Kurek should take this further. Some Jews nowadays complain that the IPN is politicized. They weren’t saying that in 2001 when the IPN was singing their song on Jedwabne!]

THE PSEUDO-OBJECTIONS, BASED ON RELIGION, FOR EXHUMING THE JEWISH REMAINS

Dr. Kurek alleged that Rabbi Michael Schudrich is either mistaken, or he is lying, about Jewish law, when he ordered the forensic dig stopped for putative religious reasons. (p. 138). In response, Schudrich’s defenders stated that there are different rabbinical opinions on this subject, and so it is improper to accuse Schudrich of error or mendacity. (p. 142). [But this is tacit admission that there is no clear cut position, even with the context of Jewish law itself, on the exhumation at Jedwabne! So why one Earth should Poles even theoretically be bound by it?]

Let us look at some basic facts. In the years after WWII, the Polish authorities conducted numerous exhumations of Jews that had been massacred by the Nazis, some of which are listed. (pp. 115-116, 180-181). Nothing was said, by any Jewish group, about any religious law being violated!

When the Polish government unilaterally obeyed Rabbi Michael Schudrich in 2001, and stopped the partial exhumation at Jedwabne, there was a wave of protests from Jews, who pointed out that the halakha was being misused in order to suppress the truth of what had happened at Jedwabne. (p. 181). Yet is was not until 2014 that it was discovered that Schudrich’s opinion has nothing to do with either Jewish religious tradition or Jewish law. (p. 180). Fact is, the full exhumation of the Jedwabne remains is completely compatible with Jewish religious law. (p. 184).

In the context of an exhumation at Wasocz, Orthodox Rabbi Joseph A. Polak pointed out that, not only should the Jedwabne victims be exhumed, but that they should be re-interred in a Jewish cemetery, or in Israel. Such relocations of bodies are especially warranted when the bodies were located at an atypical (non-cemetery) place (site of a massacre). (p. 181). Rabbi Walter Homolka, in the case of an exhumation of Jews in Germany, made even stronger the legitimacy of such an exhumation whenever the bodies had been buried outside a normal burial ground. (p. 182).

Finally, religious law is irrelevant in cases of crime, because, in such cases, secular law trumps religious law. The State of Israel freely conducts exhumations of corpses during criminal investigations, religious objections notwithstanding. (p. 213). In Poland, it is the same. (p. 184). So, by “obeying” Schudrich and refusing a forensic investigation at Jedwabne, then and now, the Polish government is breaking its own law!

THE PETITION DEMANDING AN EXHUMATION AT JEDWABNE

BULLYING TACTICS: “DO AS WE SAY, OR IT WILL BE WORSE”

There are various rhetorical tricks in use to try to intimidate Poles and Polish leaders from looking closely at what happened at Jedwabne. Kurek provides a few examples of this.

Too many Poles fall into a defeatist attitude. They tremble in their boots and say that the Polish government would never re-open Jedwabne because it would put Poland in direct conflict with Jewish interests, and would hand the Jews a powerful weapon. (p. 150). (As if Jews already don’t already have plenty of powerful weapons for use against Poland, which they use all the time).

Some Polish Jews are not opposed to a renewed exhumation at Jedwabne. (e. g, p. 151). However, in the geopolitical scheme of things, they do not count. Let us look at some of those who do.

Ronald S. Lauder, the President of the World Jewish Congress, exemplified bullying tactics. He went to the Mayor of Jedwabne, demanding of him an apology for allowing Kurek to conduct her petition drive! (p. 140, 143). Really. Never mind that conducting a petition is a basic right of expression guaranteed by Polish law.

An even nicer case of Jewish insolence is provided by Jonny Daniels who, ironically, in the opinion of many Poles, is supposed to be a friend of Poland. Daniels plainly said that, even if all 40 million Poles signed Kurek’s petition, there still would be no exhumation at Jedwabne. (p. 132-133). Kurek points out that Daniels now must be the King of Poland, and even beyond that. No Polish king would ever presume to place himself against the will of the entire Polish nation! (p. 134).

The Jewish-conciliatory teachings of Saint Pope John Paul II are often invoked by Jews to try to intimidate or shame Poland into giving Jews whatever they want. [I know: I have experienced trolls who tried it on me.] Against this, Ewa Kurek reminds us that, according to Pope John Paul II, TRUTH is the highest virtue. (p. 134). For this reason alone, doubts about Jedwabne cannot stand.

In an interview with Kurek, Israeli journalist Nissan Tzur had insinuated that a successfully-revived forensic exhumation at Jedwabne would spoil Polish-Israeli relations, and damage Poland’s reputation in the world. (p. 148). The message is clear: Poles either do exactly as the Jews want, or else…

Kurek suggests that the PEDAGOGIKA WSTYDU has been so successful that the PiS government is afraid to do anything that deviates from its mindless philo-Semitic policies. (p. 165). So a renewed exhumation at Jedwabne is anathema to this.

SO WHY ARE POLISH POLITICIANS SO AFRAID OF THE TRUTH?

In short, the Polish government is not interested in either justice or truth. It just wants to do whatever American-born Rabbi Schudrich once said. (p. 209).

However, external pressures, or the threat of external pressures, alone do not explain the abject timorousness of the Polish government. Kurek contends that politicians are much the same everywhere, with those in Poland not as bad as in some other places. Politicians like to bend history for their purposes (p. 167), and are elitists that tend to look down on “the masses” as having given them a blank check to rule for 1,000 years. (p. 168).

PiS politicians are deathly afraid—for their status as well as their careers. (p. 140).

It is the essence of leadership to act despite one’s fears. Kurek pointedly asks, “What happened to the courage that Poles were once known for?”

WHERE DO WE GO FROM HERE?

Dr. Kurek points out that the Polish government treats her, and the many tens of thousands of petitioners, just as they did not even exist. How could this change? Kurek does not say.

Perhaps what is needed is a revolutionary national spirit among Poles. There would then finally come a point where the elitists in the Polish government are more afraid of displeasing the “Polish masses” than they are in displeasing the Jews, the Eurocrats, etc. Then, and only then, will there be justice for Poles and Jedwabne.

No justice, no peace!