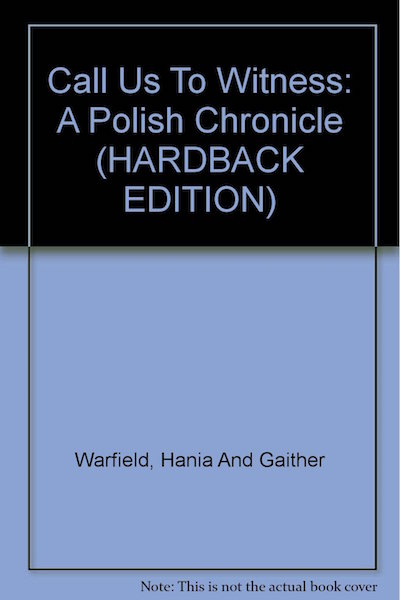 Author Gaither Warfield was the pastor of a Methodist Church in Poland, and Hania was his wife. Both were American citizens. The Warfields were trapped in Poland because of the German-Soviet aggression against Poland that had begun WWII. After Hitler declared war on the USA in the wake of the Japanese attack on Pearl Harbor, the Warfields were arrested by the German authorities. (pp. 338-339). They were eventually released in a swap of American and German nationals. (p. 400). The Warfield’s eyewitness accounts end about mid-1942.

The authors were eyewitness to many incidents of the Luftwaffe strafing of defenseless Polish civilians. (pp. 31-32, 34, 70). [And nowadays, we hear the German whine about Allied “terror bombing”, when it was the Germans who actually introduced it into modern warfare!]

On the fateful day of September 1, 1939, Hania’s life had inadvertently been saved, from the German terror-bombing and strafing, by virtue of the fact that she had hung her laundry out to dry. The Luftwaffe planes circled her house at very low altitudes, but mysteriously bypassed it. It later turned out that the hanging out of laundry to dry had been a pre-arranged signal, between the German authorities and the local Germans in Poland, intended to prevent the Luftwaffe from accidently bombing any German-owned properties. (p. 15).

Many Poles (notably the Endeks), had questioned if the huge German minority’s professed loyalty to Poland, during the Second Republic (1918-1939) was genuine. Their doubts were spot-on. Hania Warfield expressed surprise when several of her identified lifelong friends, of German descent but in every other way ostensibly Polish, openly declared themselves German, and became VOLKSDEUTSCHE–though some did so for opportunistic reasons. (p. 125).

Gaither Warfield knew why Poles usually saw Jews as perpetual foreigners—because they were. He quipped, „Reared in small American town, I had never thought, before coming to Poland, of Jews as being different, except in religion, from others in the community. In Poland, where they formed nearly 10 percent of the population, I found them a separate people, with a culture of their own. Their religion, customs, and garb were all part of a tradition handed down with jealous pride and handed down unchanged through generations. Except for doctors, lawyers, and others in the professional class, the Polish Jew saw to it that no one mistook him for anything but a Jew.” (pp. 49-50).

GERMAN OFFICIALS HAD EQUAL CONTEMPT FOR POLES AND JEWS. BOTH WERE–SOONER OR LATER–TO BE EXTERMINATED

Today’s Holocaust supremacism artificially dichotomizes the experiences of Jews and Poles, and relegates Polish suffering to a decidedly secondary status. Holocaustspeak itself reinforces this through such self-serving constructs as „Poles were spectators” and the so-called „Polish complicity in the Holocaust”.

All this is modern Judeocentric spin. During WWII, the German occupation authorities saw no qualitative differences between Poles and Jews. For this reason, Poles and Jews became „unequal victims” only out of practical considerations.

Hania Warfield describes the German-made hierarchy: REICHSDEUTSCHE, then VOLKSDEUTSCHE, then Nazi-collaborating Ukrainians and Baltics. She continues, „But after all these classes, and divided from them by a large social and legal barrier, came the MINDERWERTIGES ELEMENT (the inferior element)–the Poles and Jews.” (p. 168).

Hania Warfield quoted a Nazi German official with whom she had an encounter, „‚It’s a scandal that even a single Pole should be still alive. You should have been exterminated with poison gas, like rats. But what is delayed is not lost. The Fuehrer has promised that he still soon rid us of Jewish and Polish vermin.’” (p. 132).

Another German official was even more explicit, „Then he abruptly sat up straight in his chair, and said in a hard voice, ‘But what will you say if I tell you what our plan is for Poland? What will you answer, you Frau Warfield, a Pole, if I tell you that it two years not a single Jew will be left alive, and in ten years not a single Pole.’” (p. 182).

Hania Warfield concludes, „Unable to find Quislings among Polish leaders, the Germans gave up all attempts at collaboration with the Poles and entered on a bloody program of extermination.” (p. 183).

Owing to the standard Jewish-centered approach to WWII that nowadays dominates the West’s academia and media, we assuredly hear about non-Jews stealing from Jews (as, for example, in neo-Stalinist Jan T. Gross’ GOLDEN HARVEST), but we never hear about the massive and systematic German theft of Polish property.

„Every day one could see moving vans standing in front of houses. The looting of furniture and household goods was done openly and in accordance with German law. Whatever property the Poles owned could be confiscated at will, and in many sections of the country it automatically became the property of the Reich.” (p. 204).

As for those Poles who bought the belongings of German-murdered Jews, at German auctions, such Poles were defying Polish Underground orders. Hania Warfield came upon a cleverly-disguised Polish Underground poster which said, „Poles, resist the enemy at every step!…Do not trade in German-owned stores, and do not buy articles, even though they are indispensable, manufactured in the Reich…Do not buy liquor or cigarettes. Do not go to the movies, since the proceeds go for enemy purposes.” (p. 323).

„Polish stores had either been taken over lock, stock, and barrel by the Germans, or were closing for lack of merchandise…Looting was done systematically. It was a common sight to see Germans carrying merchandise out of stores and piling it into waiting cars and trucks. Hordes of German rovers had come in the wake of the military and were taking whatever met their fancy.” (P. 167).

Eyewitness Gaither Warfield remarked, „To give a Jew shelter, a piece of bread, or a drink of water was a criminal offense, punishable by death, said the new law. For any Jew to leave the ghetto without official permission meant immediate execution.” (p. 321).

The media, in its adulatory coverage of Jan T. Gross, has publicized his statements that pontificate that Poles should have risked their lives to save more Jews because, after all, they were already incurring the German-imposed death penalty by engaging in black-market activities. This, among other untruths, willfully misrepresents the basic nature of the black market.

Let eyewitness Hania Warfield tell it like it really was:

At the town of Bory, the Germans had such tight control of the area that no substantial illicit trade of food could take place, and so the locals were, in Hania’s words, „struggling with famine” and „Not only the poor but even the richer peasants could hardly keep body and soul together.” (p. 151).

In addition, „In Warsaw, there was less bartering than in Bory. One could still buy food for money, but prices had soared. The black market was the only source of supply. IT WAS CREATED NOT BY A DESIRE FOR SPECULATION, BUT BY STARK NECESSITY. Though we were not aware of the fact at first, it gradually became obvious that the Germans were pursuing a systematic campaign of starvation. In order to achieve this end, they had not only rationed all food, but had taken into their own hands the whole trade in food. Any attempt at free trade was met by sternest reprisals, and ever new laws were published making selling and buying more difficult. But confiscations, fines, arrests, and executions could not stop the illicit trade. HUNGER COULD NOT BE CHECKED BY TERROR.” (Emphasis added; p. 234).

Clearly, there is no comparison between hiding a Jew and engaging in black marketeering. Hiding a Jew was a real choice. Participating in the black market was not. It was a choiceless choice: You either possibly died if caught by a German that chose to shoot you, or you certainly died of starvation.

In his widely media-publicized JUDENJAGD, neo-Stalinist Grabowski, in addition to promoting his canard about 200,000 fugitive Jews killed by Poles, has mischaracterized the Polish Blue Police (POLICJA GRANATOWA) as ones that freely engaged in the JUDENJAGD. This is far from the truth. The POLICJA GRANATOWA was nothing more than an order-fulfiller of the Nazi German occupation authorities. Eyewitness Hania Warfield learned this firsthand when she sought the intervention of the Polish Blue Police for a comparatively minor matter (a set of stolen dishes). She commented, „It was the Polish police which, though partly reinstated by the Germans, had neither weapons NOR THE LEAST EXECUTIVE POWER.” (Emphasis added, pp. 316-317).

For more on the 1939 German-conquest and brutal occupation of Poland, see my reviews of the books at:

Published with the author’s permission