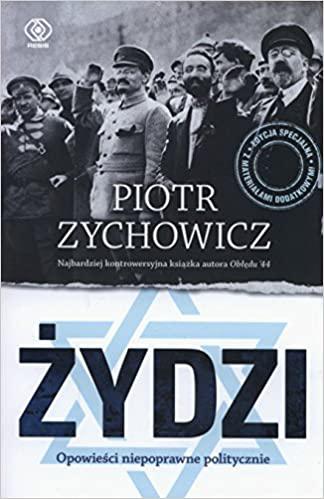 THE JEWS: POLITICALLY-INCORRECT ESSAYS is the title of this Polish-language book. Author Zychowicz identifies himself as neither an antisemite nor a philosemite. (p. 9). His work largely consists of interviews of dozens of leading Jews and non-Jews, and I report on some of them. He also includes some previously published and never-published articles of his own.

An event allegedly took place in Siekierzynski forest, near the village of Siekierno, on August 17, 1944. A Home Army unit, “Barwy Biale”, led by Wladyslaw Pietrzykowski “Topor”, encountered some fugitive Jews, and shot them. The alleged eyewitnesses contradict each other: Some say 30 Jews were killed, while others say 50. (p. 285).

Did this actually happen? Zychowicz points out that it is difficult to tell, owing to the lack of objective information. There are no Home Army documents ordering any sort of killing of Jews. All we have are postwar Communist accusations. (p. 286). These are based on forced statements from eyewitnesses and apprehended alleged perpetrators. They are obviously intended to defame the A. K. as (what else?) anti-Semitic, “reactionary and fascist”, collaborators with Nazi Germany, and as puppets of the big bad Polish government in exile in London. (p. 287, 291).

In this case, however, Zychowicz believes that the accusations against the Armia Krajowa are credible. He examines the motives of the alleged killers. Edward Sternik “Grzegorz”, an A. K. leader involved in the alleged massacre, testified that the slain Jews had earlier been passing information on to the Germans regarding the whereabouts of the A. K. (p. 291). [This fact is corroborated elsewhere. I knew an A. K. veteran, Zygmunt Bogdanowicz, and repeatedly interviewed him. He reported that his unit once disguised itself as Germans, and apprehended some fugitive Jews. Despite the absence of any duress, they immediately declared, “We have information! We have information!” on the local Polish guerrillas.] Otherwise, Germans could torture captured fugitive Jews to make them divulge information about local guerrilla units. (p. 292).

Zychowicz contends that other factors came into play. The A. K. unit was hypervigilant, and in constant fear of being spied upon, especially by unfamiliar persons in the forests. Fugitive Jews, who frequently engaged in banditry, were not exactly popular with the locals. (pp. 292-293).

GERMAN JEWS SPARED BY THE NAZIS

Bryan Rigg estimates that there were 5,000–10,000 full-blooded Jews among the 150,000 Hitler’s Jewish soldiers. (p. 41). He also estimates that there were at least a few thousand such people were made into Honorary Aryans by being granted the certificate of German blood (Deutschblutigkeitserklarung). (p. 46). For more on this, see:
https://www.jewsandpolesdatabase.org/2019/11/04/holocaust-exceptional-all-jews-die-a-myth-rigg2/

THE MYTH OF THE WARSAW GHETTO UPRISING

Eli Gat uses the word myth not to mean something that never happened, but as something that has been embellished beyond measure. It has become part of the Jewish heroic narrative.

Gat estimates that there were about 400 Jewish fighters (ZOB and ZZW), which represents less than 1% of the remaining Warsaw Ghetto Jewish population. (p. 52). Gat rejects the notion that most ghetto fighters died heroic deaths as soldiers: Most of them discarded their weapons and mixed with the remaining population, or fled the ghetto, for the Polish part of Warsaw, after a few days of fighting. (pp. 52-53). Gat challenges the notion that the Ghetto fought for a month. He points out that the Jewish armed resistance lasted only a few days–as long as it took for the Germans to recover from the surprise. (p. 52). The Germans had no need to liquidate all the 600 basement hideouts that had been built, and to which people had fled (to hide, not to fight). The Germans did not enter these hideouts. Instead, they spent weeks torching the buildings and killing the Jews inside (mostly by fire or the resulting smoke). (p. 55).

Some 12,000 Jewish civilians perished in the Uprising, against only some 15 Germans. (p. 55). The remaining Jews were taken to the death camps.

Gat believes that more Jews could have survived the war had there been no Warsaw Ghetto Uprising. In 1942, the Germans had murdered 300,000 Warsaw Jews in Treblinka. In spring 1943, there were still 45,000–60,000 Jews in Warsaw, and they were mostly specialized workers that the Germans relied upon. (p. 51). Gat rejects the notion that they were all doomed in any case, and estimates that 10% would have survived the war. (p. 52). That is, some of them could variously have fled the ghetto, hid among Poles, joined the partisans, or have outlasted the Germans (as did some Jewish forced laborers).

WHY POLAND, AND NOT GERMANY THE PERPETRATOR NATION, GETS THE SHAFT

Consider the so-called Marches of the Living. Yitzhak Laor asks why the young Israelis are not sent on a visit Buchenwald or Dachau, but are sent to Poland. He replies that Poland is easier to attack because she has less power and influence, but suggests that this will change once she becomes wealthier and more influential. (p. 87). [Poland appears to be getting somewhat wealthier and more influential, but the Jewish attacks continue.]

Moshe Zimmerman elucidates the obvious. The attitudes of most Israelis, to Poles and Poland, are decidedly negative. (e. g. p. 34).

Richard Lukas, the author of THE FORGOTTEN HOLOCAUST, reflects on the furious reaction to his book. Too many academics wanted to maintain the narrative of the Jews as the sole victims, and the Poles as (what else?) anti-Semites. (pp. 173-174).

Shlomo Sand criticizes Claude Lanzmann’s Shoah for the fact that, despite its 9-hour length, it never once mentions the Nazi German murder of millions of Poles. (pp. 20-21).

Krzysztof Jasiewicz objects to the fact that the charge of anti-Semitism is routinely used to end discussion, to suppress academic freedom by dissuading scholars from addressing forbidden subjects, and to exempt Jews from any criticism of their conduct. (p. 423, 442). Meanwhile, Jews feel free to accuse Poles of anything, and Poles feel the obligation to comply. (p. 442).