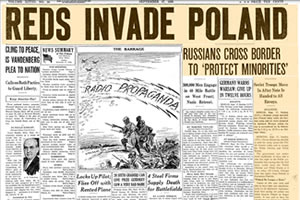 We were completely disoriented, we had no idea about the Ribbentrop-Molotw pact.  We did not know id they  [The Soviet army]were coming to join us in our fight against the Germans or if this was a new attack.  When we started to fight and the Soviet planes started to drop bombs on us, it became clear what was going on […..]

-Stanislaw Matkowski, Polish Army Officer whose unit was stationed on the Polish-Soviet border in September, 1939

It became apparent that all that was needed was an initial attack of the German Army and, after that, the attacke of the Soviet [Army]; in order to leave nothing of [Poland] this monstrous bastard of the Treaty of Versailles…

-Wyacheslav Molotov, Soviet Prime Minister in his speech to the Supreme Soviet On September 31,1939 about the German-Soviet invasion of Poland

See video below (an excerpt of a much longer film):

Beauty and the Beast