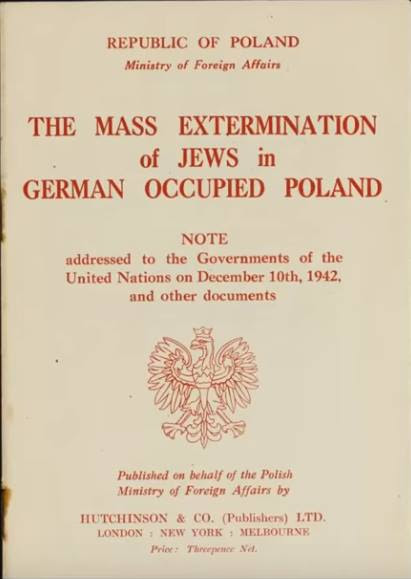 The purpose of this publication is to make public the content of the note of December 10th, 1942, addressed by the Polish Government to the Government of the United Nations concerning the mass extermination of Jews in the Polish territories occupied by Germany, and also other documents treating on the same subject.

In the course of the last three years, the Polish government has lodged a number of protests with the governments of the civilized countries of the world condemning the repeated violations by Germany of International Law and of the fundamental principles of morality since September 1, 1939, i.e. since Germany’s aggression against Poland.

[….]  In recent months these persecutions have been directed with particular violence against the Jewish population, who have been subjected to new methods calculated to bring about a total extermination of the Jews In conformity with the public statements made by the leaders of Germany.

Pawel Kukiz about the overrepresentation of Jews in the communist security apparatus in Poland between 1944 and 1956.

11th August 1937, Moscow Operational order No. 00485 of the People’s Commissar for Internal Affairs of the USSR Nikolai Yezhov on the so-called “Polish Operation”.