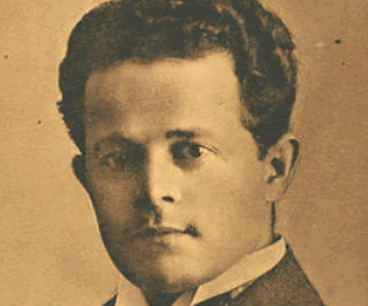 Itzhak Katzenelson was a Polish Jew, a teacher, poet and dramatist. He was born in 1886 in Minsk and murdered in Auschwitz, on May 1, 1944. While in Vittel, France, in a detention camp where the Nazis held citizens of Allied and neutral countries for possible later prisoner exchange, Katzenelson wrote Dos lid funem oysqehargetn yidishn folk (“Song of the Murdered Jewish People”). He put the manuscript in bottles and buried them under a tree, from where it was recovered after the war.  It is considered one of the most original accounts of a Holocaust witness experience, containing the elements of a personal mourning, an autobiographical novel and eyewitness reporting. “The Song of the  murdered Jewish People”, written originally in Yiddish, has been translated into numerous languages.

Here is a fragment of the poem, translated into English:

I am the one who saw it all up close,

Children, wives and husbands, and these hoary-headed old men of mine

Like stones and slivers tossed on carts by an executioner

who flogged them without a shade of pity, abused them with inhumane words.

I looked at all this through the window, and saw bands of killers –

Oh God, I saw those who were beating and the beaten marching to their death…

I wrought my hands in shame… shame and disgrace –

Through Jewish hands the death came upon the Jews – the defenseless Jews!

Traitors, those in shining bootlegs who ran in empty streets

With their mouths that wounded those words foreign to them, arrogant and ferocious,

Who threw us down the stairs and dragged us from our homes.

Who tore doors open only to burst in with violence, those bastards,

With a club raised high and ready to hit – into the homes overwhelmed with terror.

They pounded on us, hustling the elders and shoving our youngest

Somewhere into the streets overflowing with fear. And they spat straight into God’s face.

They found us in the closets and pulled us from under the beds,

And foul-mouthedly yelled: „Press on, to Hell, to umschlag, where it is that you belong”

They dragged us all from our homes, only to hunt inside them a bit longer,

To take the last piece of cloth, a bite of bread and groats.

And once in the street – they went mad! Look and cringe, for

This dead street came to be a single cry of terror –

Lorries! Heavy with so much despair and screaming…

Inside of them sit the Jews! Pulling their hair and wringing their hands.

Some remain silent – their silence screams even louder.

They stare… their gaze… is it for real? Or maybe it’s no more but a horrible dream?

Next to them are standing the Jewish police – atrocious and savage scoundrels!

Nearby – a German with a slight smile keeps an eye on them,

The German stands at a distance and observes – he doesn’t need to meddle in,

For he kills my Jews with the Jewish hands!

Here is as a link to the same fragment in Polish and where the complete poem, also in Polish,  can be purchased: