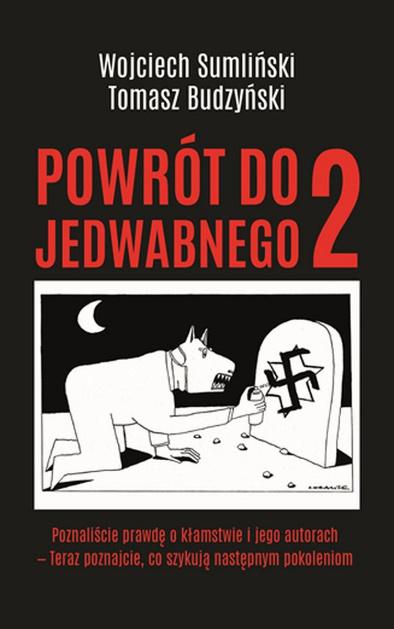 by Wojciech Sumlinski and Tomasz Budzynski.

TURN TO JEDWABNE 2 is the title of this Polish-language book. It is a natural sequel to Sumlinski’s first book on Jedwabne, RETURN TO JEDWABNE, which elaborates on the censorship that Sumlinski had personally experienced, as well as the suppression of any forensic dig at Jedwabne. See:
https://www.jewsandpolesdatabase.org/2020/02/08/censored-investigative-journalist-on-jedwabne-bullet-german-guilt-conclusive-sumlinski/

THE STILL-FORBIDDEN FORENSIC DIG AT JEDWABNE

Sumlinski and Budzynski (pp. 60-61) reaffirm the fact that a full forensic dig at Jedwabne is not necessary in order to prove German guilt for Jedwabne. However, such a dig would be the final nail in the coffin of canards such as “Polish Nazis”, as well as a pseudo-basis for pressuring Poles to pay tribute monies to the Holocaust Industry. That is why Jews are fighting so energetically that a full forensic dig at Jedwabne never happens.

THE GERMAN CRIME AT JEDWABNE

Let us put Jedwabne in broader context. Reinhard Heydrich signed a document in which he ordered German units to kill local Jews, but to disguise these acts as the deeds of locals. Einsatzkommando Obersturmfuhrer Hermann Schaper’s unit was at Wizna at the end of June 1941, at Wasocz on July 6, at Radzilow on July 7, at Jedwabne on July 10, and at Tykocin on August 22. Every time, the crime was committed the same way: Jews were herded into a barn and the barn was set afire.

The following is the actual unfolding of events. (p. 64). The Germans shot about a dozen Poles. They ordered the Jedwabne Poles to gather the Jews together, and then herd them into the barn. Yes, the Poles had a choice. But it was the choice between life and death. (In Holocaustspeak, this is called a choiceless choice, but Jews seem to be the only ones that are said to have faced choiceless choices.) Possibly some Poles participated willingly, intending to avenge the earlier Jewish-Soviet collaboration. After WWII, the Lomza trial accused the Poles, based on non-eyewitness testimony. This became the foundation of Jan T. Gross and his lies in NEIGHBORS.

STILL-LIVING EYEWITNESSES OF THE JEDWABNE MASSACRE

Consider Anna Wadolowska. (pp. 68-on). She was 12 years old in 1941, and described how the Germans went house to house ordering all the Jews out. She also saw the Germans driving a Polish boy at gunpoint, forcing him to disclose the homes of the Jews. Later, she saw the pillar of smoke from the burning barn, and her father cried, realizing that the Germans had burned human beings.

Another eyewitness, Marian Wadolowski, was 14 years old in 1941. He describes how, upon the entry of the Red Army in 1939, the local Jews donned red armbands, and proclaimed that Poland was gone and would never return. (p. 74). The Jews identified important Poles to the Soviets for deportation to Siberia. Then Nazi Germany attacked her erstwhile Soviet ally. Wadolowski saw the Germans in Jedwabne on that fateful day in 1941. The Germans commanded the Poles to identify the homes of the Jews. If the Pole did not cooperate, the Germans would kill him. (p. 75). Poles were also forced to help round up the Jews. (p. 78). Wadolewski personally saw the Germans, not the Poles, herd the Jews into Slesicki’s (Sleszynski) barn, and then set it on fire.

Holocaust Memorial Day has become a U. S. holiday, and Holocaust education has been introduced into U. S. schools at all levels. In 2020, Holocaust indoctrination got a new push from H. R. 943, the Never Again Holocaust Education Act. (p. 227). In Washington, D. C., there stands the United States Holocaust Memorial Museum (USHMM). All these promote the ideological narrative (which I call Holocaust supremacism) that the Jews’ Holocaust was a totally exceptional event and that it is incomparable with anything else that ever happened. (p. 229). To this is added the mystification of the Holocaust, effectively making it a religion (Holocaustianity). Thus, for example, we are told that the Holocaust is “beyond history” (p. 230) and is even “beyond rational understanding”. [No one says this about any other genocide!]

In cinema, Americans are fed schlock such as Ida, Poklosie, Schindler’s List, and Defiance (p. 168). To many Americans, Poles are Jew-killers little different from the (now-deGermanized) Nazis. (p. 162).

Moshe Kantor, a Russian Jew, billionaire, and colleague of Vladimir Putin, gets in the act. He accuses Poles of being (what else?) complicit in the Holocaust, and repeats Russian revisionism by blaming the Polish victim for starting WWII. (p. 216, 219).

All this adds up to getting the world to think of the Jews as a people of great moral rectitude that are owed. (p. 201). And Poles are set up as the ones doing the owing. Jewish heirless property now is extra-legally (in fact, magically) supposed to become the property of the WJRO (World Jewish Restitution Organization.)(p. 232).

CONTROLLING THE NARRATIVE AND CHILLING DISSENT

The original RETURN TO JEDWABNE BOOK came out only because of what seemed to be miracles. It defied Jewish pressure, including that of the Jewish community in Warsaw, to suppress it. This featured last-minute cancellations of speaking engagements. (p. 145).

Other censorship in Poland included Twitter. A Pole was prosecuted for using the phrase “Jewish death camp”, which was in competitive imitation of the mendacious phrase, “Polish death camp.” (p. 179). Needless to say, there was no indignation over the latter.

Author Sumlinski advocated that Poles have their own lobby in Washington (p. 194), and for this he was called (what else?) an anti-Semite. This went beyond name-calling. While in Canada, there was an attempt to put him in jail for engaging in “hate speech” in telling unpleasant truths about Jews. (pp. 195-197).

THE POLES’ DOCILE RESPONSE TO THE HOLOCAUST-RELATED PROVOCATIONS

Sumlinski and Budzynski (p. 51-52) react strongly to the fact that so many Poles risked their lives to save Jews, and now the Jews show their gratitude by slandering Poland, defaming Poland’s history, and whitewashing Jewish Communist criminals. The latter have Polish blood on their hands. Yet the Poles keep yielding and yielding.

The authors praise Chicago’s Polonia for their protests against S. 447. (p. 160). Some Polish priests in Chicago at first supported Sumlinski, but then backed out, understandably intimidated by the magic phrase of (what else?) anti-Semitism. (p. 161).

While at Jedwabne, Sumlinski came across naïve Poles that asked why Jews would lie about Jedwabne. “There is big money involved”, replied Sumlinski, “It is as plain as daylight”. (pp. 55-56). The monies to be extorted from Poland are not chump change: They are in the $300 billion dollar range. (p. 134).

The authors contend that Poles have been far too Judeocompliant, especially when it comes to Jedwabne. They wonder how it is that the Polish government can fund the restoration of Jewish cemeteries, the building of the Polin Museum of the History of Jews in Poland, and other such Jewish-centered institutions, but no building of the Museum of the History of Poland. (p. 39). He calls Polish church leaders cowards for rushing to judgment, accepting Polish liability, and apologizing in all Poles’ name, for Jedwabne. (p. 126).

Presentations, in the West, of the Warsaw Ghetto Uprising have sometimes featured the claim that the Jews fought longer than the entire Polish Army in 1939. (pp. 259-on). The comparison is nonsensical: A group of Jews fought a small group of German police units. At no time did the Germans divert so much as one frontline soldier to quell the Uprising. See:
https://www.jewsandpolesdatabase.org/2019/11/04/warsaw-ghetto-uprising-myth-of-long-duration-reitlinger/

Sumlinski and Budzynski (pp. 263-on) have a good grasp of the much-hyped Danish rescue of Jews. The German occupation of Denmark was incomparably milder than the German occupation of Poland. The Danish fishermen are made into heroes, but they encountered next to zero German opposition to shipping the Jews to Sweden. See:
https://www.jewsandpolesdatabase.org/2019/11/04/danish-rescue-of-jews-myth-almost-stauber/

THE LEGEND OF FRANK BLAICHMAN

In 2019, U. S. Secretary of State Mike Pompeo called on Poles to pay “Holocaust restitution”, and then proclaimed Frank Blajchman (Blaichman) a hero. (p. 255-on). He was anything but: He was a deep-dyed Jewish Communist. After fleeing the German-made ghetto, Blajchman joined the Communist GL-AL bands, which are known for robbing (sometimes killing) Polish peasants. During the second Soviet occupation of Poland (1944-on), our “hero” became a Communist security Polish (Bezpieka) official. In 1951, he emigrated to the USA, and sat quietly for more than a half a century. Then, in 2009, he published a book about his “experiences”, making vicious Polonophobic accusations. He accused the Home Army (A. K.) of being (what else?) anti-Semitic, and of having and implementing a plan to kill fugitive Jews. This recycled Communist propaganda is older than the hills.  In addition, Blaichman makes elementary errors in his book that deprive it of all credibility. See:
https://www.jewsandpolesdatabase.org/2019/11/04/atrocities-jewish-complicity-naliboki-massacre-zebrowski/