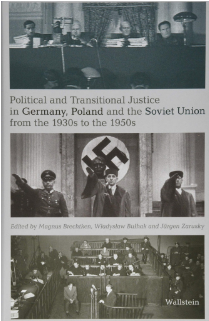 My review of this anthology is limited to the works of Ingo Loose and Andrzej Paczkowski. Both are historians.

POLISH COLLABORATION: SOME FACTS AND FIGURES

Paczkowski reviews several works on the postwar trials of Poles that had collaborated with the Nazis. He writes, “It is easiest to calculate convictions, but here, whereas Elżbieta Kobierska-Motas assumes that in 1944-1988 there were approximately 20,000 convictions, Andrew Kornbluth estimates that in 1944-1960 various courts convicted 21,000 persons, and according to Kubicki, approximately 18,000 people were sentenced in those years. Thus, we may estimate that 13,500-16,500 of the sentenced individuals were ‘active collaborators’ (the rest were Germans or non-Polish citizens). Attention may be drawn to the relatively high percentage of acquittals: according to Pasek, 30-40 % of the trials ended in acquittals, and according to Kornbluth it was even 45%. If we assume that about 40% of the total number of defendants were acquitted, and if we use this estimate as a basis for generalized assumptions, we could be talking about approximately 19,000-25,000 ‘active collaborators’ who were put on trial. However, Kornbluth estimates that until 1960 at least 32,000 persons were tried in court (perhaps even 35,000 or so), which means that this figure would have included some 28,000-30,000 ‘active collaborators’.” (p. 162).

ASSESSING POLISH COLLABORATION WITH THE NAZIS

Let us keep these numbers in much-needed perspective. Out of some 28 million total ethnic Poles, 28,000 (an upper limit) comes out to 0.1% of the ethnic Polish population. This is a negligible percentage. Besides, it does not stand out as noticeably different from all the other collaborators that existed in every war since time immemorial. Moreover, the majority (probably overwhelming majority) of these Polish collaborators did not act against Jews. (pp. 164-165).

COLLABORATION WAS DRIVEN BY SELFISH OPPORTUNISM, NOT AGREEMENT WITH NAZI IDEOLOGY

Andrzej Paczkowski assesses the postwar trials as follows, “It is difficult to clearly specify whether sentencing some ten thousand ‘active collaborators’ or more, and judging probably approximately 30,000, is a success or a failure in terms of the number of defendants and convictions. The significant percentage of acquittals and many cases of prosecutors refusing to press charges and putting defendants on trial could suggest that even collaboration of an ‘active’ nature was to a great extent recognized to be situational and ‘acting for the benefit of the occupier’ was often a one-off act motivated by the prospect of immediate profit rather than from a sense of political or ideological commitment to the enemy cause.” (p. 167).

CONCLUSION ON POLISH COMPLICITY IN THE HOLOCAUST

The accusation of “Polish complicity in the Holocaust” is an undefined one–and therefore clearly an accusation of an emotional and political nature. It is false according to every sensible definition of the term, and it is high time that Jews stop repeating this calumny.