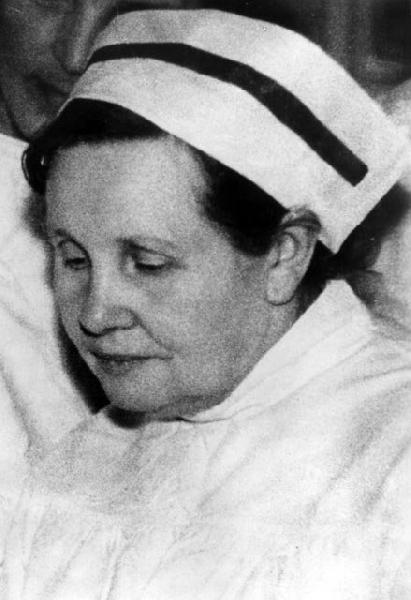 Official Germans ordinance dictated that pregnant women were not to be sent to concentration camps. However, there were pregnant prisoners in Auschwitz, as these regulations were not always followed, early pregnancies were not always visible during transport, or there were sporadic cases of conception in the camp. In 1942 and early 1943, women visibly pregnant on arrival as well as those whose pregnancy became visible with time were sent to the gas chambers or murdered by phenol injections If a pregnancy was carried to term, the baby was killed, by either being dumped into a container with excrement, or the umbilical cord was left untied.

As Lechosław Cebo writes in the book, “Więźniarki in the Nazi camp in Oświęcim-Brzezinka”, [Female prisoners of Auschwitz-Birkenau camp] the situation began to change in mid-1943. Newborn Aryan children did not have to be killed, and in 1944 even barracks intended specifically for them were created. After birth, the babies were entered into the prisoner record. Like all other prisoners, they were also tattooed with a camp number, usually on their thighs.

The midwife in the camp

Stanisława Leszczyńska, was involved in helping the Jews in the Lodz ghetto by delivering food and false documents. On February 18, 1943, she was caught red-handed, brought to the Gestapo, and sent to Auschwitz, together with her daughter. A midwife by profession, she managed to take with her the documents confirming her qualifications. After presenting the documents to Joseph Mengele, who had just started his post as the camp doctor, Ms. Leszczynska was allowed to deliver babies in the shadow of the crematoria.

She performed deliveries on a chimney duct that ran along the barracks. Instead of a sterile sheet, she had a dirty blanket that was moving from lice in it. Both the emaciated women and the newborns often fell victims to the vermin and rats. Despite this, Ms. Leszczynska managed to achieve amazing results. In all 3,000 deliveries she performed, the mothers and the children she helped bring into the world did not die. Unfortunately, many did later succumb to the horrors of camp life – diseases, cold temperatures and hunger. Even though Mengele’s order was to save only Aryan children and kill Jewish children, Ms. Leszczynska did not follow his orders. She never killed a Jewish baby. Mengele knew that she was not following his orders regarding Jewish babies, yet he did not punish her for it. All female prisoners whose babies Ms Leszczynska delivered later described her as someone who was not guided by a desire to survive. Her primary goal was to help the women as best as she could.

One day, Ms. Leszczynska was summoned to Josef Mengele. The camp doctor wanted to get data on perinatal mortality. When Stanisława Leszczyńska gave him the numbers, he had a hard time believing them.

Here is what Ms. Leszczynska said years later about that encounter:

“He [Mengele] said that even the most perfectly managed clinics in German universities could not boast such success. In his eyes I saw anger and hatred. It is possible that extremely emaciated organisms were not nourishing enough for bacteria to settle in them.”