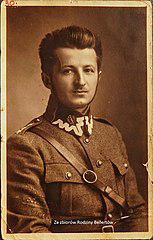 When the Soviet Red Army liberated Auschwitz-Birkenau in January 1945, about 4,800 prisoners remained in the camp, all of whom were in a near-death state due to severe starvation and various diseases. The Germans had fled earlier with the “healthier” prisoners, whom they forced on a death march to the west.

As Chief Physician of the Polish Red Cross, Dr. Józef Bellert organized a hospital for the patients and operated it until its dissolution in October 1945. With the help of Polish physician and nurse volunteers, the lives of 4,400 patients were saved. The patients came from more than 20 countries and most were Jews. The majority were bedridden, which included over 400 children, some of whom were Jewish twins who had been used as experimental subjects by SS physician Josef Mengele.

The bedridden patients were pulled from bunks covered in filth and excrement and taken to clean wards. They had to be introduced gradually to normal eating and received their meals in small doses (for example, one tablespoon of mashed potato soup three times a day at first, with this being increased to several spoonfuls at a time afterwards). Many weeks after the Soviet liberation, nurses were still finding bread hidden under the patients’ mattresses. Some of the ex-prisoners hoarded bread in this way because they could not bring themselves to believe that they would receive more the next day.

The prisoners suffered from such serious diseases as typhoid fever, tuberculosis, and the so-called camp sickness (atrophy of the digestive organs, which made the patient unable to eat and regain strength). Many of them had infected wounds, bedsores, and frostbite in their arms and legs. They were afraid of people in white coats and trembled with fear at the thought of injections and going to the baths because they associated it with the deaths inflicted by the German torturers.

During the 8 months that the hospital operated, 38 doctors and over 70 nurses worked there. Also, 40 medics, many of whom were Jewish prisoners themselves, were involved in helping the sick. Taking into account the scale of the challenges that they all faced, the result of their collective work can be considered to be quite positive. Of the 4,800 patients, about 400 died, while the rest recovered and were able to leave the camp on their own.
The photo of Captain Doctor Jozef Bellert was taken in 1920, 25 years before he established the Polish Red Cross hospital for the near-death prisoners of Auschwitz-Birkenau.